WE ARE A CAPE TOWN BASED STUDIO WITH A PROVEN TRACK RECORD OF BEING HIGHLY CREATIVE PROBLEM SOLVERS,WE BELIEVE THAT ART AND INNOVATION CAN BE TRULY SUSTAINABLE.WE ADHERE TO THE FOUR PILLARS OF SUSTAINABILITY ENVIRONMENTAL,ECONOMIC,SOCIAL AND CULTURAL.

Introducing the next collection of bendable giraffes 😊

Complimentary free international shipping for orders over 500 rands valid till end of July .

So excited that we will now be shipping through @fedex worldwide.Happy my customers can now experience world class service that they so deserve .

Introducing Doorstopper’s with a ‘heart handle’ for a better customer experience.You may customize to your colors of your choice .

Thank you Deanna Breaux Gathe for support and despite the problem I been experiencing with post office ,Dr Gathe received his dog on Father’s Day .

This piece is finally in London.Special thanks to Lilly Devourah

Thumb book page holders now available @vandawatershed and online 😊
Easy to clean.
Gentle on your thumb.
Handmade from recycled Havaianas.
Won’t scratch your book.
Allow you to use your other hand to hold your cup as you enjoy your favorite drink.
Super light weight and portable .

This piece is looking for a new home .
Let me know if you are interested.
He is a mask wearing compliant as well 😁
#rffsstudio #recycledhavaianas #sustainability #recycled

Door mats now comes in two sizes.
Small and large selection.They perfect for indoors like bathroom floor or outdoor at your front door .
Easy to clean .You may customize to colors of your choice.

All new this April starting with all letters of alphabet.You can create your name or words .With collaboration of @havaianas_southafrica @havaianas we may have colors for you to choose from.Order yours today 😊.

Thank you Bonnie Goldman Eisner for the support and patience.You finally got them in Philadelphia,US.

South African flag 🇿🇦 inspired.
Made to order.
Order yours.

Sore muscles? How about these handmade massage balls.They are durable and come in different colors .

COLLABORATION:
Sustainability, collaboration, creativity, and compassion are the foundation of the V&A Waterfront’s festive season this year. Our 2020 festive season is preceded by months of global upheaval, extended moments of isolation and change that few of us could predict or control. We are continuing to contribute to humanity’s attempts to restore hope and we set out to do so in a meaningful way. Continuing the theme of Joy from Africa to the World, the V&A Waterfront became the first in the world to produce sustainable festive décor last year and has now recycled it once again for this year’s festive displays and installations for all to enjoy. We collaborated with Platform Creative Agency, a company focused on growing and promoting the South African design, lifestyle and cultural industries and this year, 134 crafters and designers have contributed to spreading hope and light through festive décor.
#JoyfromAfrica

In light of a year that has been filled with uncertainty and fear, the V&A Waterfront will at midnight, the 31st of December shine a beam of hope from the precinct which, on a clear night, will be visible throughout the city and suburbs that have a view of the city bowl. The beam, which consists of 36 vertical searchlights, forms part of the Waterfronts’ Tribute of Light symbolising the lives that were lost, the jobs that were affected, the coming together of a nation in solidarity and ultimately for hope in the new year.

“We are using the symbolic warmth of light to draw us to a moment to connect, even though we are physically apart, and hope everyone who sees it takes the time to contemplate on themes of compassion, solidarity, connection, inspiration, and collaborations we have been able to demonstrate and experience during a very uncertain period. New Year’s Eve will mark the first time in the V&A Waterfront’s 30-year history, that we won’t see crowds converging in our neighbourhood for the traditional countdown to a fireworks display at midnight to usher in the New Year” says David Green, CEO of the V&A Waterfront.

Each day of the 7 days will have a theme which will be reflected as follows: REFLECTION, COMPASSION, SOLIDARITY, INSPIRATION, CONNECTION, COLLABORATION and HOPE.

There's something absolutely magical about the sustainable kelp forest artwork created in the Watershed, neighbouring the Two Oceans Aquarium! Don't forget to look up when passing this masterpiece! 🌱

We appreciate this work of art even more knowing that it was made locally and sustainably. The kelp garlands are made from discarded plastic bottles and constructed by the public with Our Workshop. The seaweeds are made by Recycled flip flop, and the reclaimed wooden fish were made by BlocArt. And, of course, the beautiful beadwork animals were made by Master Wire and Bead Craft.

We love this celebration of Cape Town's local talent - and are equally thrilled at the reuse of waste materials throughout the project! Be sure to check it out the next time you're in the V&A Waterfront (and why not come compare it to a real kelp forest at the Aquarium while you're at it)!

Be the first to know and let us send you an email when Recycled flip flop posts news and promotions. Your email address will not be used for any other purpose, and you can unsubscribe at any time. 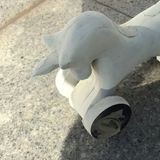 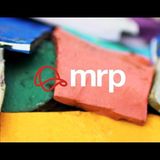 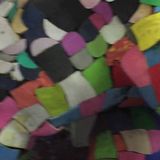 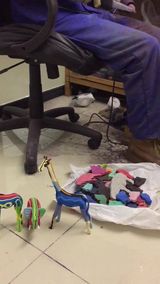 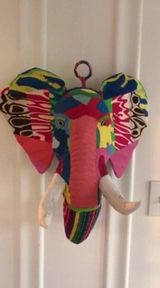 Other Art in Cape Town