A Bi-Monthly Stand Up Comedy Showcase at Waterline Brewing Company: Comedians telling jokes under a bridge. No trolls and No Admission. Laughs, Craft Beer and Food Trucks!

Thank you to everyone who came out to support the Gruff Goat Comedy showcase tonight! Thank you to the comedians who put on a great show! Thank you Waterline Brewing Company for letting us do this in your wonderful venue!

Another great Wednesday night at @waterlinebeers for the @gruffgoatcomedy showcase!

Great new we have the Papadom's Singing Sangwich Truck here with us tonight until 9 pm!

Tonight is our first night having the show on the 3rd Tuesday of the month and I have a great lineup for you! @cliffcashcomedy @mdubcomedy @billlakecomedy and @hunt_nc1917

Hey Gruff Goat Comedy fans your host Lew Morgante will be headlining a comedy show Friday, March 4th If you would like to come out and enjoy some laughter grab a ticket:

Check out your host as he headlines a comedy show Friday, March 4th!

What a fun night at the @gruffgoatcomedy showcase tonight the next show will be Tuesday, yes Tuesday March 15th!

Next Wednesday, March 2nd 7:30 pm we have a great lineup for you I have the incredibly funny Grant Lyon, Wills Maxwell, Jr. and Anthony Corvino! Hope to see you all at Waterline Brewing Company
And Papadom’s Food Truck!

Wednesday, March 2nd at 7:30 pm we have a great lineup of comedians at @waterlinebeers telling jokes!

What a fun night of comedy at Waterline Brewing Company!

Wednesday, February 16th at Waterline Brewing Company we have another great lineup of comics to entertain you!

The Gruff Goat Comedy Showcase is a Bi-Monthly Comedy show at Waterline Brewing Company that takes place the 1st & 3rd Wednesday of the Month. The show is FREE & FUN!

Thank you all for coming out tonight to a great show! See you again Wednesday, January 19th!

Hey Gruff Goat Comedy fans I am teaming up with my friend Ellie Coleman to help raise some funds for a good cause we will be having a benefit comedy show at the The Brewer's Kettle Wilmington on December 3rd. All the funds from the show will be donated to the the Seeking Serenity Recovery House Program to help pay the rent for people who are in recovery. Come out and support the show if you can if you want you can also donate here:

Hey want to help the world and drink beer!

Next Friday we will be hosting our first ever Vaccination Happy hour! @newhanoverco health department will be here from 6-8pm Giving out free vaccines. With your vaccine you will get a token that you can trade in for a free beverage. Cheers ya’ll!

Have you ever wanted to try Standup comedy? Well here is a chance for you to try!

Dare to join the next generation of comedy greats! Enroll in a DareDevil Improv class and learn the tools to boost your creativity and hone those comedy chops!

Thank you to all who came out tonight!

Well the 4 year anniversary show was better than I could imagine!
Thank you Waterline Brewing Company for allowing us to tell jokes at your venue.
Thank you Blaire Postman Comedy for trusting us to take over your creation.
Thank you to all of you who come out the first and third Wednesday of the month to make this show the success that it is.
Thank you to the comics who come from near and far to tell their jokes to the best audience ever!
My heart is so full and grateful for the opportunity to bring laughter to others.

Heres to many more years of laughs together!

Comedy performances have exploded in Wilmington over the past few months, with so many open mics and showcases that it's hard to keep track of them.

Tomorrow night there will be cake on top of the always free comedy for our 4 year anniversary show!
I hope to see you there.

I can’t thank you all enough for the support you show for this comedy show that started as a monthly showcase that has now turned into a bi-monthly showcase I look forward to many more years of comedy!

Next month will be the 4 year anniversary of the Gruff Goat Comedy Showcase at Waterline Brewing Company thank you to them for having us there and thank you Blaire Postman Comedy for trusting me to take over what you started 4 years ago!

Beautiful night outside to watch some comedy at Waterline Brewing Company!

Due to expected weather tonight we will be inside the taproom tonight!

Jack Nelson - Night of the Hunter

Hey if you were at the GRUFF GOAT Comedy showcase a few months back you got to see this live! Enjoy!

A bunch of topical jokes and material that are no longer relevant. Really something no one asked for. Directed by J. Noel SullivanWritten & Performed by Jack...

We will be outside in the beer garden tonight!

Hey everyone we will still be doing the show but due to the cold we will be doing it in the taproom socially distanced.
Thank you!

Be the first to know and let us send you an email when Gruff Goat Comedy posts news and promotions. Your email address will not be used for any other purpose, and you can unsubscribe at any time. 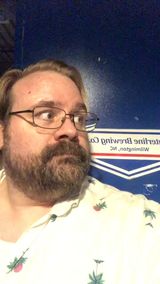 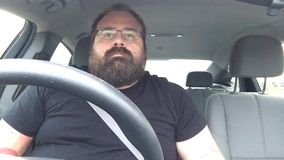 This is the video for the Wednesday, April 4th GRUFF GOAT Comedy Showcase happening at the Waterline Brewing Company at 8 pm the show is FREE featuring local and touring comedians. Enjoy some laughs, craft beer and a local food truck! 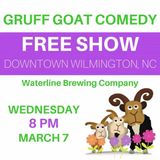 Don’t miss the next Gruff Goat Comedy Show at Waterline Brewing Company Wednesday, March 7th at 8 pm! The show is FREE the beer is cold and the food truck food will be tasty! 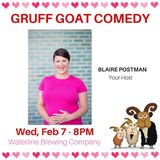 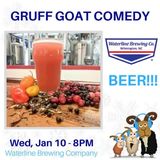 TOMORROW! The amazing January edition of Gruff Goat Comedy Showcase at Waterline Brewing Company! PLUS it's FREE and will be 65 & sunny! Click here for more info: https://www.facebook.com/events/913054592188498/ 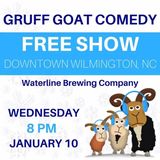 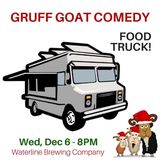 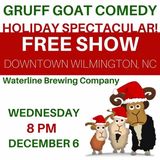 Other Performing Arts in Wilmington

Tonight Wednesday, May 4th another edition of the Gruff Goat Comedy Showcase the show is FREE and always fun! Grab a friend and have a great draft beer on this Wednesday evening at Waterline Brewing Company!
When is your next show?
Hey, anyone willing to do some time in Franklinton, NC tonight? I had some last minute cancellations by comics.
Any comics want to do a show tonight outside of Durham?
Speaking of goats...my dad just picked up this guy today to join our others. I will come see you guys soon. Lew Morgante