Over 200 Beers, Full LIQUOR and Daily Specials. Live Music. GET FUBAR! You can get drunk at any bar, but you party at Fubar! Good booze. Rad music.

Help Alli through radiation and chemo, organized by Allisa Stilwell

Help support this awesome lady! If you've ever chugged a PBR at Fubar donate now!

Hey everyone, In October of 2020 Alli was taken to the hospital after havin… Allisa Stilwell needs your support for Help Alli through radiation and chemo

Relocating to another planet.

Vote fubar tbt ultimate bar 2019. Served least amount of customers in 2019 but still gets so much love

Tonight! No cover! Seventh to last weekend to party at Fubar!

With abundant sadness and grief, I must announce that New Year’s Eve will be the last night to party at Fubar before we close our doors for good. It has been an amazing nine years with all of you; from day one this has truly been a community project molded and shaped by every band, musician, artist, comedian, promoter, photographer, philosopher and PBR that came through the door and spent a little time with us- together in this tiny, dark, loud and sometimes smelly hole in the wall. There are just too many of you to thank but one stands out that must be mentioned. While all these out-of-town big businesses are moving in and showing off their “community liaison” in the press to buy affection, one person has been on this 600 block (and everywhere else in town) working hard for more than nine long years, contributing so much art, inspiration and love. This place has been everything because of Todd Frain and I’ll miss working with (and yelling at) him every day. So… While this town may have changed too much for us, I know YA’LL haven’t forgotten how to FUBAR, and we are going to be throwing as many fun shows and parties as we can fit in the calendar the next 47 days until the end. Hope to see all your faces! Love, Jay & Fubar

Happy Halloween! Party tonight with DJ Sugarbear and costume contest! Try some fall treats and eat all the free candy!

9 years!!! What a ride. Come celebrate this Friday with us! No cover!

Tonight we have Geri X and more! Doors at 9, no cover!

Saturday night we have Slade and the Wasters’ last show and more! No cover!

Tonight! Bass by the Bay! Doors at 8.

Thursday night we have Bass By The Bay! All new revamped EDM night!

Last night was wild! Thanks Iron Reagan! Photo by

Friday night we have Geri X and more! No cover!

Tonight! All of this metal and punk for free! Doors at 8.

TOMORROW NIGHT (MONDAY) we have IRON REAGAN (members of Municipal Waste and Cannabis Corpse), Debt Neglector, and Leviathan Cross for FREE! Doors at 8! This is gonna be nuts, don’t miss it!

Tonight we have Joe Nester and more! Doors at 8.

Tonight! Shadowrun Brothers DJ the night! No cover, starts at 9.

Monday night we have IRON REAGAN (members of Municipal Waste and Cannabis Corpse) for FREE. Yep, you read that correctly.

Saturday night we have Joe Nester and more!

Friday night we have a ShadowRun dance party! No cover!

This Saturday Joe Nester and Marshall Alexander return to St Pete for an all acoustic show. The last one was sold out! General admission and Meet and Greet Tickets still available check out our events section for details!

One week from today we have IRON REAGAN (members of Municipal Waste and Cannabis Corpse) for free!

Be the first to know and let us send you an email when Fubar Downtown posts news and promotions. Your email address will not be used for any other purpose, and you can unsubscribe at any time.

Send a message to Fubar Downtown: 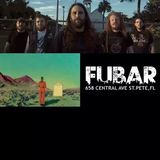 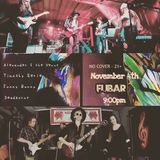 Tonight we have our Second Saturday's Hip Hop monthly! Infynite Traxx headlines. Doors at 9, no cover! 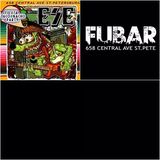 TONIGHT! ESE is touring through and we're having a fiesta! 9PM doors, FREE! 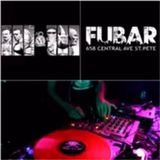 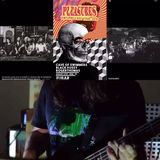 This Sunday we have PLEASURES closing out your weekend! Black Pussy, Cave of Swimmers, and Rogerthomas will also be playing. $5 cover for the bands. 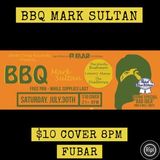 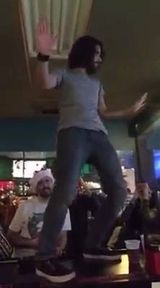 Craig's on that hotline bling 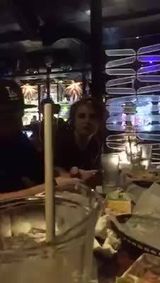 Craig is getting it! 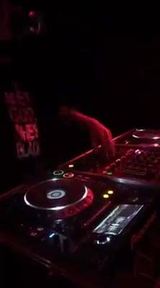 SAMURAI SHOTGUN... opened with a rap version of the Imperial March from STAR WARS Empire Strikes Back.. holy sh*t this was amazing.. and the iphone does not do it justice... get fubar. 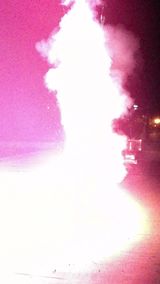 Fubar Downtown's Todd Frain-Fubar for Best of the Bay Bartender loads a mortar to fire off the roof. Upside down. Oops. Hope everyone had a safe Fourth of July!!

In May of 2020 having NO prospects in sight and unable to see many of my close friends amidst a global pandemic I decided to visit a friend in Seattle.

As far away as I felt from those I loved here , a longing for my HOME being as far away as I could get from it in the continental US was a feeling I hadn't planned on.

I started making and posting videos for my friends of songs that reminded me of them and it made me feel a lil bit at home.

Now that I'm home I’ve decided to do the same for my town, making videos at places I remember fondly as kind of a THANKS FOR THE MEMORIES type of thing.

ENJOY.
Our page was hijacked and some of our posts were removed. Here is our bike riding "Red Lights" video. Cheers, everyone!

You finally did it. YOU MANIACS! YOU BLEW IT UP! AH DAMN YOU! GOD DAMN YOU ALL TO HELL!!

The continuation of St Pete's death at the hands of gentrification and the unstoppable onslaught of unaffordable condominiums claims its latest victim: Fubar.

A staple of the 600 block for a decade, a great place to catch metal, hip hop, EDM, punk and anything in between show. A great place for a cheap drink from a friendly bar keep. Done. F**k.

Well instead of bitching about the impending arrival of yet another who-gives-a-flying-f**k-business that is sure to occupy that spot, here is a quick list of some of my favorite moments at Fubar.

- Accidentally stumbling in for the first time about 10 years ago on sugarcubes. Sitting at what I think was a giant cable spool table and being blown away by a drums/cello duo for a couple hours.

- At Antiwarpt, walking in during a break between bands for a beverage and the Wholetones were playing. They were awesome and I couldn't believe they didn't make my list of bands to see (I scout every act before attending a festival.) Henceforth, when I make a horrible call not including a band on our schedule, it is referred to as a Wholetones moment.

- Caught old school deep dark dubstep producer Tunnidge, who was here from the UK. This was a must see for me. It was an amazing Tuesday night and I was three hours late to work the next day.

- Saw Miami bizarro group Telekinetic Walrus for the first time here. I've been in love with them since. Of equal importance, this was the first of a million d***y nights that we partied with Nick. Lawd have mercy.

- Summer of 2013. Me and Jen had just completed our move into our new house. We were spent and beaten down. There was a little 600 block day festival going on and I somehow talked her into heading out there and we rocked out to some hip hop all day without dying. We'll unpack later.

- Set and Setting. There was one show in particular where I solidified my spot in the very front and banged my head while going deaf for the show's entirety. Awesome totally awesome.

- Came out one Christmas Eve and had those little elf figurines nailed to my jacket with fake blood all over. More than one person took issue with my costume choice and things got heated. I call that a success.

- Crossed the street after experiencing Orb at State Theatre to take part of a Lilith show. A Lilith show/ritual isn't anything you forget too soon.

- Right before Uber was a thing I don't know what was going on, why I was flipping out or by myself. But I ran in and kinda desperately asked Todd to help me get a cab. He was right on it but I freaked out before it arrived and ran away. LOL?

- Bumped into one of my favorite bartenders there one night, Eric, and for some wild reason he decided to fight four big dudes. I did my best to hold the largest one off of him for a second but yeah, that went about as expected.

- Of course the very last weekend to close out 2018. We managed to catch Geri X, Johnny Mile & The Kilometers and The Surfin'Dead. All excellent acts.

Linda Hines, talk to Todd and make it happen!

Other Live Music Venues in Saint Petersburg (show all)