The Chamber Music Society of Lincoln Center performs the greatest works of chamber music in NYC’s Alice Tully Hall and in concert halls across the world.

When CMS was founded, live performance of chamber music was dominated by the string quartet. CMS drew together a small repertory company, nine of the finest string, wind, and keyboard artists, and started performing a rich array of repertoire not often heard on the concert stages of New York City. Since that time, the world of chamber music has grown and changed dramatically, with large numbers of

When CMS was founded, live performance of chamber music was dominated by the string quartet. CMS drew together a small repertory company, nine of the finest string, wind, and keyboard artists, and started performing a rich array of repertoire not often heard on the concert stages of New York City. Since that time, the world of chamber music has grown and changed dramatically, with large numbers of

Take a moment today to spend time with this work in its entirety: https://bit.ly/3Gjmx4z

Take a day trip of sorts with CMS musician and violist extraordinaire Matthew Lipman as he shares insight from our tour to Shaker Village of Pleasant Hill in Harrodsburg, Kentucky, this Saturday.

Matt will share behind the scenes views of the music, food, atmosphere, and serenity of this quaint village and chamber music mini-festival via our Instagram page in the Stories section. Don't miss out-- follow us on Instagram at @chambermusicsociety

📝Here's a quick recipe for a perfect Summer Evening for just $20:

Voila! An evening to remember at Lincoln Center. 😎 🥂

Did you miss The Innovators: Debussy to Crumb earlier this month? You've still got three days to purchase access to this incredible concert, and once purchased you can enjoy the full performance until July 12th.

“Going out on a limb” is an adventure taken by artists seeking to break through to new levels. When they have done so, the world has typically received much of the most exciting and memorable art ever created. This program unites four of music’s most innovative composers, each building bridges...

“It is like the last sentence of a fairy tale: 'And they lived happily ever after.' The story leaves a memory and you cannot tell if it all happened in a dream or reality. This story is composed as homage to a great master, and is dedicated to him.” Estonian composer Arvo Pärt described his "Darf ich ..." for solo violin, bell in C sharp (ad lib.) and strings, dedicated to Yehudi Menuhin.

Find the full #YouTubeTuesday video on our Youtube Channel!
https://www.youtube.com/c/chambermusicsociety/videos

Every composer deserves a holiday!

Check out the full performance of this exciting work-- "Composer's Holiday" from Three American Pieces by Lukas Foss on our website and enjoy your own mini musical getaway. 😉

Celebrate World Fiddle Day the CMS way with Kristin Lee, violinist and violist Matthew Lipman playing a rhapsodic Passacaglia in g minor by Norwegian composer Johan Halvorsen based on the final movement from the harpsichord suite in G minor by George Frideric Handel.

Spend a minute with composer Caroline Shaw and the Calidore String Quartet, and then catch them in the full Composers in Focus event, available now, on demand. 🎬

And that’s how you close a season. 🙌
Congratulations to all of this season’s artists, thank you to every audience member, and thank you to each patron and donor who help us make moments like this one. Here’s to many more!

We stopped by rehearsals last week to ask a few of the musicians from the season finale-- Carnival of the Animals-- which animal/movement from the work they love the most... check out their answers and comment below with your own!

Trios, quartets, quintets, and duos from high schools throughout the tri-state area were invited to perform at Alice Tully Hall May 14th at our 38th Annual Young Musicians Concert. Ensembles were selected from 4 regional concerts presented earlier this season.

We could not be more proud of each of these ensembles. Follow along in our Stories as we highlight the dedicated young musicians who took part in this year's incredible concert.

Celebrate Friday the 13th with a little music of mystery... Our Digital Encore of The Innovators: Debussy to Crumb is available online now!

Camille Saint-Saëns was so worried that he would not be taken seriously due to the humor of Carnival of the Animals that he ensured that the full work was not published until after his death. He even tried to limit its performances.

Thankfully, his friends were so enchanted with the music that they begged the otherwise serious Saint-Saëns to approve one movement for publication as a freestanding solo: The Swan.

Discover what his contemporaries and generations since have loved about all 14 movements of this timeless and enchanting work, May 15 and 17 in Alice Tully Hall

In 1950, composer/pianist Benjamin Britten and tenor Peter Pears commissioned composer Aaron Copland to arrange a set of American folk songs for the two to perform at Britten’s Music and Arts Festival in Aldeburgh, England.

Hear one of these beloved pieces, "I Bought Me A Cat," from Copland's Old American Songs as part of our Carnival of Animals concert, May 15 and 17, with soprano Erika Baikoff and pianist Michael Stephen Brown.

"Sweet bird, that shun’st the noise of folly,
Most musical, most melancholy!"

It's not an opera, not an oratorio, not even an ode, but George Frideric Handel's "Sweet Bird," from his L’Allegro, il Penseroso ed il Moderato, Concerto Grosso in G was described in his time as, "an entertainment." From the enchanting opening flute passage to the gentle lyrics for the soprano; it's the poetry of Milton perfectly coupled with the drama and lyricism of Handel.

May 15 and 17, experience the beauty of this work with flutist Tara Helen O'Connor and soprano Erika Baikoff.

How would you like a pre-concert champagne reception, prime orchestra seats, and then a private dinner with The Danish String Quartet after their concert in Alice Tully Hall this October?

Bid on this experience and more in our gala auction today: https://bit.ly/3FrV1l8

In the meantime, our annual gala is tomorrow, May 10th, and concert-only tickets are still available for just $50! https://bit.ly/39ClK2m

Bird warbles, cat sounds, and even frog croaks came to mind for 17th Century Bohemian-Austrian composer Heinrich Biber when his employer, the Count of Kromeriz in Moravia requested programmatic music. Biber let his imagination roam wild and mimicked the natural sounds of the forest, barnyard, and fields with uncanny accuracy in his Sonata representativa in A major for Violin and Continuo, C. 146.

Hear this work --played for the first time in Alice Tully Hall in over a decade-- along with music by Handel, Haydn, Copeland, Debussy, and Saint-Saëns, May 15 and 17 as we celebrate the natural world for our season finale: Carnival of The Animals.

Applications for The Bowers Program for Individual Artists and Ensembles is now open! Apply today for this career-changing residency.

Even at the age of 25, Beethoven was both ambitious and practical in his first publication; his Trio in G major for Piano, Violin, and Cello, Op. 1. This set of three piano trios gave him the opportunity to display his remarkable skills at the keyboard while also pushing the boundaries of how his predecessors had treated the piano trio's lighter form and expressivity.

Join us tomorrow evening as CMS Artistic Director Wu Han, violinist James Thompson, and cellist Nicholas Canellakis perform one of the works that set the stage for Beethoven's expansive repertoire.

Experience how music can move you with tonight's program, The Innovators: Debussy to Crumb.

With vocal works from Charles Ives, George Crumb, and Claude Debussy sung by critically-acclaimed soprano Tony Arnold, as well as Igor Stravinsky's "The Rite of Spring for Piano, Four Hands." This is music to remember.

Chamber music often highlights our ability to adapt and collaborate. In that light, we are adjusting the concert for May 5th in the Rose Studio due to an illness. Our updated program includes Franz Schubert's "Trout" Quintet for Piano, Violin, Viola, Cello, and Bass in A Major with pianist Michael Stephen Brown, violinist Arnaud Sussmann, violist Matthew Lipman, cellist Nicholas Canellakis, and double bassist Anthony Manzo.

Percussionists are inventors, engineers, and imaginative artists by nature.

Help us welcome three incredible percussionists-- Daniel Druckman, Ayano Kataoka, and Ian David Rosenbaum-- to Alice Tully Hall Tuesday, May 3 for The Innovators: Debussy to Crumb as we celebrate composers who expanded the realm of chamber music.

Be the first to know and let us send you an email when The Chamber Music Society of Lincoln Center posts news and promotions. Your email address will not be used for any other purpose, and you can unsubscribe at any time.

Send a message to The Chamber Music Society of Lincoln Center:

"Vox Balaenae (Voice of the Whale)" for Three Masked Players 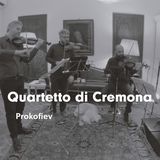 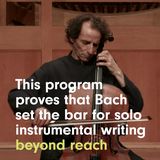 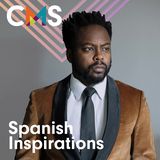 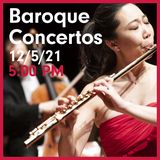 Ravel Sonata for Violin and Piano

Everybody Love the Cello

“An exploding star in the musical firmament.” -Wall Street Journal

The Chamber Music Society of Lincoln Center, (CMS) is one of eleven constituents of the largest performing arts complex in the world, Lincoln Center for the Performing Arts, which includes the New York Philharmonic, New York City Ballet, Lincoln Center Theater, and The Metropolitan Opera. CMS has its home in Lincoln Center's magnificent Alice Tully Hall. Through its many performance, education, recording, and broadcast activities, it brings the exhilarating experience of great chamber music to more people than any other organization of its kind. Under the inspired leadership of Co-Artistic Directors David Finckel and Wu Han, CMS presents a wide variety of concert series and educational events for listeners of all ages, appealing to both connoisseurs and newcomers. The performing artists constitute a revolving multi-generational and international roster of the world’s finest chamber musicians, enabling CMS to present chamber music of every instrumentation, style, and historical period. Annual activities include a full season in New York, an equally full season of national and international tours, nationally televised broadcasts on PBS’s Live From Lincoln Center, an international radio series, and regular broadcasts on SiriusXM and American Public Media’s Performance Today. Audiences worldwide enjoy an extensive selection of New York performances through live stream on the CMS website.