Explore music and experience community in Nor

Concert #2 This Sunday, NOV 20th at 5pm!
MOSA is absolutely pleased to present Jazz titan Miguel Zenon in an exploration of the Bolero, alongside longtime collaborator, Luis Perdomo. I’ve admired Miguel for years…for that magical blend of tradition and innovation that is all his own, while cleverly excavating a popular romantic song genre. Expect lots of soul, and lots of verve! Entry is FREE, first-come-first serve, in collaboration with Carnegie Hall Citywide. Doors 4:30pm, show 5pm. After-Party locale announced at the show. Fondly, Bridget Kibbey (2022/23 Artistic Director).

MOSA Concerts is here to bring you World-Class musicians, celebrating them in their own Uptown Manhattan Neighborhood! We take that proscenium down, allowing artists and audiences to connect.
Come on by and meet a new friend, while listening to the best of the best!

Get your tickets: www.MosaConcerts.org
We encourage a season subscription to ensure seats to our Carnegie Hall Co-Sponsored events, which tend to sell out fast!!

Join us for opening night!! October 9th at 5pm at Our Saviour's Atonement Lutheran Church (178 Bennett Ave, NYC)! Come on inside and cozy up with some virtuosic baroque shredding with the incredible Alexi Kenney Emi Ferguson, and Bridget Kibbey

When Music at Our Saviour's Atonement (MOSA) returns this fall for its 20th season of concerts, programming will be in new hands, as today MOSA announced the appointment of renowned harpist Bridget Kibbey as Artistic Director. Series founder and Artistic Director-emeritus James Noyes is stepping aside to pursue new career opportunities.

Called "the Yo-Yo Ma of the harp" by Vogue senior editor Corey Seymour, Bridget first appeared on MOSA this past May, as part of Carnegie Hall's Citywide program which provides free concerts at venues in all five boroughs. The concert had originally been scheduled for April 2020, and was the first concert presented by MOSA in more than two years.

"I happen to live a few blocks away from the church, but hadn't been inside before the Citywide concert," Bridget notes. "From the moment I walked in, it was apparent that this is a special space...truly an acoustic gem for live music."

Details for the season will be announced at a later date, but in the works is a series of six concerts between October and May 2023 on Sundays at 5pm. Two of the concerts will continue MOSA's collaboration with Carnegie Hall Citywide. Concerts will be 60-75 minutes long without intermission and feature musicians drawn from Kibbey's network of colleagues and collaborators in the fields of classical, jazz, and world music who also live in Northern Manhattan. New this season will be MOSA-sponsored after-parties, featuring local restaurant vendors, allowing audiences and artists to connect."

"We have the wonderful opportunity to connect neighbors to the highest level of performances by musicians who make Northern Manhattan their home, and who also happen to be some of the best musicians in the world within the classical, Latin Jazz, Jazz and global spheres." 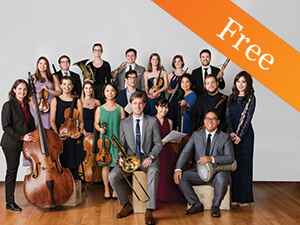 Ensemble Connect’s trademark virtuosity and versatility is showcased in a program that features works by Barber, Brahms, and Sean Shepherd. Barber’s Summer Music—cast in one short movement—soars with beautiful melodies and delights with witty writing in the winds. Brahms’s String Sextet in G Major,…

Bravi tutti...what a wonderful afternoon of vocal music by Cantus! And a record set for the biggest MOSA audience to boot. Thanks to the guys, Carnegie Hall Neighborhood Concerts, our volunteers, and everyone that came to make this such a memorable event.

If you couldn't make it today, Cantus is singing at Advent Lutheran's Music Mondays tomorrow night at 7:30 PM.

Eagles take flight! Superb concert today by New York Scandia Symphony 's String Orchestra. Here's a pic of the group during the final bars of Frank Foerster's The Eagles of Inwood Hill, premiered today at MOSA. Thanks to Dorrit, soloists Frank and Lisa Hansen, all of the musicians, and everyone that came out to hear our season kick-off.

On June 2nd, 2006, three American Bald Eagle chicks, five weeks of age, arrived in northern Manhattan’s Inwood Hill Park. New York City’s Park Department had brought the young birds from Wisconsin, in an attempt to reintroduce the iconic birds to Manhattan. The park rangers had closed off a remote section of the park, and built there a large, tall platform with spacious hack boxes. Trees in this secluded area were pruned to provide a perfect playground for the baby eagles. 360-degree rotating cameras provided live feedback to monitors in the Inwood Hill Nature Center, located at the foot of Inwood Hill, near 218th Street. From there viewers could watch the eaglets’ playful frolicking and observe how the birds grew bigger and stronger every day, thanks to a diet of fresh fish, graciously provided by Fairway Market. Very soon, the lively and rambunctious youngsters started to flap their growing wings, in attempts to lift themselves off the ground.

Since I live practically next door to the Inwood Hill Nature Center, I frequently went there to observe the fledglings’ progress via the
eaglecam. Before long, the monitor was not needed any longer to
observe the eagles: they could be seen flying over Inwood Hill or
sitting for hours quietly perched on trees, calmly watching people walk by, before returning to their open cages for food and sleeping.

It takes a bald eagle about three months to become an accomplished flier. In early September, the birds made excursions to New Jersey and up the Hudson River, still always returning to their home on Inwood Hill at night. Finally, the three eagles decided to leave Manhattan behind, and to explore the big wide world beyond Inwood Hill Park. They spread their wings and took flight to find new homes further north: one of them found a new home at Lake Erie, another at Lake Michigan, the third settled in Adirondack Park near Saranac Lake. Thanks to their tracking devices, their paths and whereabouts could be closely monitored.

My composition was inspired by my joyous encounter with these
magnificent animals. The opening section, titled The Spirit of the Air, portrays a carefree feeling of flying and sailing through the air. Solos of viola, cello and violin are introducing the three adventurous eagles afterward individually. An eagle’s first flight is always a milestone, a clumsy and potentially dangerous event. In the following section I tried to give a musical description of this significant event of frenzied excitement, including two unsuccessful crash landings, from which they recover quickly. Night falls, and we can relax to the sounds of a calm Notturno-Lullaby until the bell strikes six times. A new morning has arrived. As the sun sends its first rays over the hill, the young eagles wake up. With renewed energy and strength they take to the sky, soaring to great heights triumphantly. I used the old traditional song Over the Hills and Far Away to express the exuberant mood of the liberating moment, when our three heroes fly off into the unknown, in a true pioneer spirit fashion.

The American Bald eagle was adopted as a national symbol in 1782, when its image was chosen for The Great Seal of the United States. President John F. Kennedy wrote later: “The founding fathers made an appropriate choice when they selected the bald eagle as the emblem of the nation. The fierce beauty and proud independence of this great bird aptly symbolizes the strength and freedom of America.”

This concert is offered in partnership with Carnegie Hall Neighborhood Concerts.

Academy fellow ToniMarie Marchioni interviewed composer Ryan Gallagher, whose Oboe Quartet made its Carnegie Hall and NYC premiere on December 1 at Weill Recital Hall. ToniMarie, an oboist, performed the work. For those who missed Thursday's performance, the Oboe Quartet will be played once more thi...

Be the first to know and let us send you an email when MOSA Concerts posts news and promotions. Your email address will not be used for any other purpose, and you can unsubscribe at any time.

Send a message to MOSA Concerts:

A great venue in our vibrant neighborhood!
x

Other Arts & Entertainment in New York (show all)