Suncoast Pinball & Arcade manufactures the best gaming experiences with all of our machines made here in the USA!

In RoboCop arcade game a player controls RoboCop who advances through various stages that are taken from the 1987 movie. The bonus screen is a target shooting range that uses a first-person perspective. The intermission features digitized voices from the actors.

Fill your arcade room with a full size arcade🕹️ Choose between 60 or 412 games. Customize with graphic options and t-molding colors. Order today: Suncoastarcade.com

How many RoboCop arcade games exist?

Proudly made in the USA, Suncoast Arcade 🕹️ stands behind our products with a 5-year parts warranty for all arcade machines at SunoastArcade.com

Fill your counter space with a retro tabletop arcade today!🕹️ Ranging from 60 games to 3000, 8 t-molding colors, and 10 marquee bracket colors; your customization options are limitless. 🌈Please reach out about other customization opportunities. Order our Pedestal for Tabletop Arcade Machine. The pedestal is a great addition, now you can enjoy the full-size arcade feeling for a tabletop price.
https://www.suncoastarcade.com/tabletops

Our full size arcade machine is a great addition to any home. 🕹️ Don't forget to add your name to the marquee at no additional cost! ✏️
https://www.suncoastarcade.com/full-size-arcades

The hero of this game is Toki. He used to be a man, but was turned into a monkey by the sorcerer, Vookimedlo, who kidnapped his girlfriend, Miho. Toki can spit to kill enemies or he can jump on their heads. There are also the usual end-of-level baddies.

Invite the feelings of nostalgia in with this 2 player Cocktail Arcade machine 🕹️ https://www.suncoastarcade.com/cocktails

We teamed up with Sezzle to offer you 4 interest-free payments over 6 weeks! Just choose Sezzle at checkout💳 https://www.suncoastarcade.com/shop-all

Our custom arcade graphics are available for pick up or delivery! Our products are made right here in the USA and backed by a 5-year warranty.🕹️ https://www.suncoastarcade.com

Fill your arcade room with a full size arcade🕹️ Choose between 60 or 412 games. Customize with graphic options and t-molding colors. Order today: www.suncoastarcade.com

The original Mortal Kombat was developed as a reaction to the popular Capcom fighting game Street Fighter II, with digitized graphics of real game actors as opposed to animated cartoon graphics. The Mortal Kombat storyline and gameplay were conceived in 1991, but not released into arcades until 1992.

Bring the nostalgia of an '80s arcade home with this Cocktail Arcade Machine 🕹️ With over 400 games to choose from and 2 player options, the possibilities are endless!
https://www.suncoastarcade.com/cocktails

Fill your counter space with a retro tabletop arcade today!🕹️ Ranging from 60 to 3000 games. Made in the USA, FREE shipping Suncoastarcade.com

Free shipping for ALL orders! 5 year warranty, made in the USA! Order today: https://www.suncoastarcade.com

Fill your arcade lounge with a full size arcade🕹️ Choose between 60 or 412 games. Customize with graphic options and t-molding colors. Order today: www.suncoastarcade.com

In the Teenage Mutant Ninja Turtles Arcade Game, the four brothers all have their unique traits. Leonardo is the balanced and average leveled turtle, Michelangelo has greater strength but shorter reach, Donatello has the greatest strength and longest reach though is the slowest out of the four and Raphael is the fastest but also the weakest.

Bring the nostalgia of an '80s arcade home with this Cocktail Arcade Machine 🕹️ With over 400 games to choose from and 2 player options, the possibilities are endless!
https://www.suncoastarcade.com/cocktails

Who is the girl on the Teenage Mutant Ninja Turtles arcade?

Fill your counter space with a retro tabletop arcade today!🕹️ Ranging from 60 games to 3000, 8 t-molding colors, and 10 marquee bracket colors; your customization options are limitless. 🌈Please reach out about other customization opportunities. Order our Pedestal for Tabletop Arcade Machine. The pedestal is a great addition, now you can enjoy the full-size arcade feeling for a tabletop price.

Fill your arcade lounge with a full size arcade🕹️ Choose between 60 or 412 games. Customize with graphic options and t-molding colors🌈Even rename your marquee! Order today: https://www.suncoastarcade.com/full-size-arcades

To recover from the damage you take on during the game all you would have to do would be to eat the food items that you’ll see laying around the game board. Be careful not to take on too much damage though as that will cause any player to revert back into a naked human.

Be the first to know and let us send you an email when Suncoast Pinball & Arcade posts news and promotions. Your email address will not be used for any other purpose, and you can unsubscribe at any time. 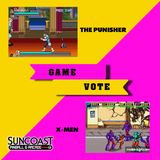 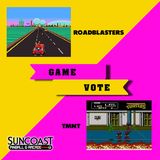 Suncoast Pinball provides the ultimate pinball experience for the serious gamer, aficionado, and consummate pinballer! With the launch of its all new original pinball line, Suncoast combines an industry leading process with old world craftsmanship.

Other Arcades in Largo

https://www.facebook.com/groups/1204172363420327/permalink/1317605205410375/
https://youtu.be/T_FBY7ckuUI Described as a tilted pinball machine that keeps on playing, the first song gave the feel! The second song, to me, starts with a similar melody and has some computerized voices. Because pinball was in arcades, I included the entire feel, which included video games as well. With some singles from the first album released a year before, we cover 1982-84 (and a few after and before.)
83: Brent's Front Porch https://www.brokentoken.com/podcast-episodes/83-brents-front-porch/ Ah August....we barely knew ye. There's so much that transpired this past month, it's hard to get it all in a blog post - fortunately for us (and to everyone else's dismay) we have 3 hours and 20 minutes to tell all you fine listeners all about it! If the math is right, that should be about 1.7 O'Shea Commutes. #WINNING All joking aside, we've got a pretty jam-packed episode for everyone - we discuss the latest play field clear coat issues that has taken the pinball internets by storm over the past couple of weeks and dovetail that with our thoughts on Jurassic Park and Star Wars "Pin", both announced and released from Stern Pinball over the past 30-45 days. We also discuss a really neat offering for anyone with a Cinematronic arcade machine (Star Castle, Armor Attack!, etc.) and talk about a recent trip to Brunswick, GA where Whitney visited the The Pinball Palace (and Planet Fun) over family vacation. Brent gives us a good education on video and pinball optos and we respond to a challenge issued forth by our friends at Pod Casserole. We also cover off on our monthly updates where Whitney picks up a "spare" Robotron and Brent gives us his thoughts on both Suncoast Pinball's Cosmic Carnival and Stern's Black Knight: Sword of Rage (spoiler: Whitney loves it, Brent doesn't... it's like Donkey Kong all over again). Oh.... don't miss Brent's "Facebook Rant" segment this month... it was so much fun that we named the episode after it!
Can pinball machine manufacturing be a growth industry? Largo-based Suncoast Pinball and Suncoast Arcade aims to reach a high score behind the comeback of the arcade game.
Cosmically charged!!! #cosmiccarnival #southernfriedgaming would love a cosmic translite!
Flip N Out Pinball is ready for @Southern Fried Gaming Expo in Atlanta this weekend! We have been the distributor supporting this show and ATL for years. Come by and play all of the best new pinball machines on the market. We can also take your orders there. For those that can’t attend, no worries, call or message us and we will ship one or two or ten right to your door. Come by, hang out, pinball! Josh Kuglar (American Pinball), Gerry Stellenberg (Multimorphic), and Jason Fowler (Slap Save Pinball Podcast) will be at the Flip N Out Booth all weekend. Pinball Undesirables also will be streaming the Flip N Out games so make sure to battle Stephen. That’s just the beginning. LETS DO THIS ATLANTA! Tentative Game List - W***y Wonka Standard (production) - W***y Wonka LE/CE (prototype) - Cosmic Carnival - Oktoberfest - Oktoberfest - Monster Bash Remake SE - Attack From Mars Remake CE - Lexy Lightspeed - Escalera Demonstrations - And More Zach Meny Flip N Out Pinball 847.778.4876 [email protected] Jersey Jack Pinball American Pinball Multimorphic, Inc Suncoast Pinball Chicago Gaming Company Slap Save Pinball
Cosmic Carnivals by Suncoast Pinball are rolling off the line and Flip N Out Pinball is ready to take your order!!! $5995 is one heck of a deal for a new premium pinball machine. Isn’t it beautiful?!?! Call us now and get yours! 847.778.4876 [email protected]
We are excited to welcome Suncoast Pinball to #SFGE2019. You know you want to go on an unforgettable intergalactic romp on the Cosmic Carnival Pinball machine. Be sure to visit them in their booth H6 or during the Suncoast Pinball Panel at 7pm on Saturday! #Pinball
my school is sho-lung-dojo, i was wondering if we can team up and your company can sponsor my school and we sponsor your business:
My very first time winning a pinball contest! Thanks Suncoast Pinball for the very cool signed dirty Donny book!