Band Leadership Team meeting today! We played tic-tac-toe, but you had to make the other person win.

Today is the day! Get your lunch and dinner and support the band! Make sure you let them know you’re with the band.

Today is the day! Get your lunch and dinner and support the band! Make sure you let them know you’re with the band.

Our Symphonic Band Captain and Percussion Sergeant, Kate, had a busy weekend. She auditioned for All-State yesterday and played Tin Roof Orlando today with School of Rock Orlando.

Come out and support the band!

We had a visit from Mrs. Bauer’s class earlier this week! We are about a week into working on Darklands March by Randall Standridge.

…and just like that, our beginning band fittings are done! Now to match everyone to an instrument! 🎷 🎺

Thank you to all of our instructors!
Left to right: Mr. Gauvin, Mr. King, Mr. Rick, Mr. Morales, Dr. Nichols, and not pictured, another Mr. King!

Guardians of the Galaxy

We are so lucky to have such awesome musicians coming in to perform for and work with our students!

Day 1 of beginning band fittings! We heard some awesome sounds being made today!

Thanks to everyone that came out for parent night tonight!!! I was wonderful to see you all!

See you at parent night!

Only a couple hours to grab some Chipotle Mexican Grill and support the band! If you go, let them know you’re with the band. If you do a mobil order, use code, H2BK8CZ

See you on Tuesday!

Congratulations CJ and Kate on a wonderful concert as part of the inaugural 7 Star Honor Band. The group made up of students from all around Florida that just completed their seventh grade year.

CJ and Kate are ready for their rehearsals as part of the inaugural 7 Star Honor Band. The group made up of students from all around Florida that just completed their seventh grade year. Eight hours of rehearsal today, six hours tomorrow, and a concert tomorrow night.

Congratulations to Isabella on a wonderful concert! She attended the Florida State University Band Camp and was first chair in the second highest ensemble and played an awesome solo! Way to go!

Congratulations to Luke on an amazing performance at the Ocala Summer Music Camp!

Attending ERHS and doing band? Check out the flyer and click the link to fill out the form.

Reminder for 8th Graders headed to LMHS (and current LMHS students if you’re seeing this). A message from Mr. West.

Bring all summer paperwork, your instrument , athletic clothing ( Tennis shoes required), and a smile! Let's get 2022 started off right!

P.S. For those needing to checkout LM equipment, please bring your instrument rental form, found within the welcome packet). We will be handling checkout procedure through the week.

Congratulations to Jonathan on his new keyboard!

The owners of Trek Bicycle Clermont donated it to our program and we decided to raffle it off. Over 100 students entered!

Some of the last band room visits…they took a look around and the walls silently wept too.

Thank you to everyone that came to support us! There were so many people and the weather was perfect!

Central Floridian Elsa Kate Nichols completed her Doctor of Musical Arts degree at the University of Arizona in summer 2018 after presenting a lecture recital and document on her doctoral research, entitled "Leonard Bernstein's Halil: Serialism, Eclecticism, and Antagonism in the American Flute Concerto"—this research was chosen as one of the two winners of the 2019 National Flute Association PhD/DMA Graduate Research Competition. In spring 2017, while completing her academic courses, Kate served as a visiting assistant professor, acting as sabbatical replacement for Brian Luce at the University of Arizona Fred Fox School of Music. In this position, her primary responsibilities included performing as a member of the Arizona Wind Quintet, the resident faculty ensemble; teaching applied undergraduate lessons; conducting weekly flute studio masterclasses and technique sessions; and instruction of the undergraduate woodwind methods class. In addition, while working in the university’s recording studio with the resident flute ensemble, Flutefinity, she utilized her skills in arranging, recording, and producing musical projects.

Dinner tonight, Wednesday, May 25th at PDQ to support our Band students!!

Jazz Band will start playing at 5:30 pm and will play every 45 minutes.

Congratulations on a fantastic concert!

Garrett Gauvin Caraballo is a freelance musician and educator in the Central Florida region, specializing in a wide range of genres.

As a recent graduate of the University of Central Florida, Mr. Gauvin has worked with numerous world-renown artists, such as Conrad Herwig, Jay Friedman, and Kristian Dentley, among others. During his time at UCF, Mr. Gauvin also had the pleasure to record 3 albums with the school of music, Including 2 with the Flying Horse Big Band, (Good News, 2018 and Florida Rays, 2019) as well as a live recording at the Dr. Phillips Center Walt Disney Theatre with the UCF Wind Ensemble (Zodiac Concerto, Featuring Bill Caballero and Roger Oyster, 2018).

Also with the performing groups at the University of Central Florida, Mr. Gauvin has had numerous opportunities to premier new arrangements and compositions, as well as perform in numerous conferences. These include the FMEA convention in Tampa, Florida, the CBDNA Southeast Conference at Northwestern State University, and the Festival Internacional de Trombones de Costa Rica, in Puntarenas, Costa Rica.

As a professional, Mr. Gauvin performs regularly across the Central Florida area, including events ranging from weddings, dance halls, and traditional concerts. Mr. Gauvin has played in several festivals with artists such as Viti Ruiz, and is a mainstay in several bands locally, such as the Rico Monaco Band.

Matias earned his black belt on bass, but wasn’t satisfied. He asked if he could test on another instrument. The next day he played all required tests to earn his second black belt on mallet percussion! Way to go Matias!

Some final belt tests of the year!

Congratulations to the first black belts of the year!

Congratulations to some of our newest belt recipients!

Mr. King is a trumpet player with formal classical music training, who performs everything from classical music and jazz, to pop, rock, soul, R&B, ska, reggae, and salsa. You may have seen him in Epcot's Candlelight Processional Orchestra, Guardians of the Galaxy: Awesome Mix Live!, The Universal Studios Brass Band, Mango's Tropical Cafe House Band, or with several other groups.

In his career, he has performed with a multitude of artists such as Hank Williams Jr, Alan Parsons Project, The Temptations, The 4 Tops, and Little River Band.
He has also done broadcast performances for ESPN, ABC, NBC, NatGeo, Telemundo, PBS, and TBN.

He performs throughout the year at Walt Disney World and Universal Studios, hold a bachelors degree in music from Rollins College, and teach lessons/clinics for middle school, high school, and college students and music programs.

Call Me Maybe at FAME!

Playing some One Direction at FAME!

Mr. Kissinger, or as we call him, Mr. Rick, has been teaching and playing professionally for over 20 years throughout Central Florida and North Chicago. Schooled at USF, FSU and UCF, Mr. Rick plays multiple woodwinds such as the clarinet, sax, flute, and oboe, in pit orchestras for Broadway Shows, Big Jazz and Swing Bands, and Disney's' Candlelight Festival Orchestra. Some past celebrities include Ann Murray, Sheena Easton, Michael W. Smith, Michael Bolton, Chita Rivera, including tours in China, Europe and Taiwan. Mr. Rick is COO of LicoriceSticks.com LIVE wedding and special event entertainment in Orlando, collects electric trains, Star Wars, and Star Trek vintage memorabilia, and has two chiweiner fur babies, Chloe and Peanut.

Congratulations to Lake Minneola High School Bands on their first annual Prism concert! It was fantastic!

Our Proud Principal, Mr. Sid came in to jam with Beginning Band!

Be the first to know and let us send you an email when East Ridge Middle School Band posts news and promotions. Your email address will not be used for any other purpose, and you can unsubscribe at any time.

We had a visit from Mrs. Bauer’s class earlier this week! We are about a week into working on Darklands March by Randall Standridge.

Guardians of the Galaxy

We are so lucky to have such awesome musicians coming in to perform for and work with our students!

Thanks to everyone that came out for parent night tonight!!! I was wonderful to see you all!

Call Me Maybe at FAME!

Playing some One Direction at FAME!

Our Proud Principal, Mr. Sid came in to jam with Beginning Band!

We had a very special treat yesterday. One of our Symphonic Band tuba players brought his accordion and played for us. Way to go Emilio! 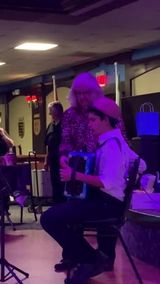 Congratulations to our tuba player Emilio on an awesome accordion recital over the weekend! So cool! 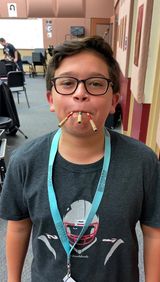 Not entirely sure what to make of this, but it certainly needed to be immortalized…

Here is Mr. King and Mr. Rosaci playing a little Chicken for our beginners. How cool! 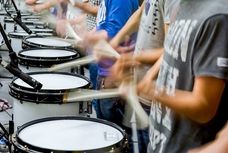 We missed coming to your elementary school and performing for your class this spring! As you head into 6th grade, we hope you will consider BAND for one of your electives. It's not too late to join. To help you know more about the ERMS Band Program and the different instruments that you can try, here is a video made during our distance learning by some of our school alumni and some of our 8th grade students who have been in band for the past three years. You do not need to know how to play an instrument and you don't have to already have an instrument in order to join. If you want to see Band on your schedule in the fall, click on this Google Forms link and fill out the basic information. You'll be happy that you did! https://forms.gle/T1pJok5NUHHNbRjQ8

This Friday is the deadline for 7th and 8th grade students in Concert Band or Symphonic Band to request a nomination for the FBA District 19 STAR SPANGLED HONOR BAND. Selected students perform the Star Spangled Banner in the Leesburg Football Stadium on Saturday, November 2, to open the high school marching MPA. Check recent emails for further instructions, or send a permission note with your student by Friday.

Our musicians recruiting the next band class!! They did a super job this morning!!

We played the National Anthem before the Marching Band MPA's at Leesburg High School today, 11/6/10.

Other Arts & Entertainment in Clermont

Just sharing... Face shields are one of the recommended tools for some of our students to have in band class this year, depending on the instrument played. CVS has a pack of five for $20.  
For Parents of rising 9th grade band students attending East Ridge High School: We will be having a Parent Zoom meeting on Tuesday July 14th @ 7:30pm. Hope you all can attend!!! Details to follow. 🎼
Only 2 days until the big solo / ensemble performances. Who’s going and when? Our beginning flutist will be performing Friday night! 🎉
Shout out to Spartan Band at the Clermont Christmas parade. And as a bonus, Mr Walker does a shimmy.
Here are some photos from middle school night at East Ridge High. https://www.facebook.com/pg/MichelleBrownPhotography/photos/?tab=album&album_id=10157867033122022
Car wash day!!!! Woohoo! Outback Steakhouse 9-1.
We hope to see everyone on Tuesday night Lake Minneola High @ 6 for course selection night! The band will have a table set up in the cafeteria. Please stop by and say hello! Perhaps there will even be a surprise gift for you.
Big shout out to the #spartanband members who played at the first Lake County Annual All County Band Concert. Great job!
Great job Mr. Walker and Symphonic Band performing at Disney Springs.
Shout out to the Spartan Band at the Groveland Christmas Parade. Great job!
Great job Spartans marching in the Clermont Christmas Parade. Looking forward to next week in Groveland.
Great job to the Spartan Band members who performed in the Star Spangled Honor Band at Leesburg High School.