Tickets Can be Purchased at the Door / Online
Cash / Credit Cards
$20.00 each
Group Tickets and Family Pack can be purchased online. Free Parking onsite parking lot.

GHOUL BROTHER'S HOUSE OF HORRORS is a brand new, mind-blowing, horror-dripping, haunted house attraction, built just for you! GHOUL BROTHERS opened its creaky doors on Friday, September 29, 2017. GHOUL BROTHERS is being created by Hollywood FX artist and film director, David Barton, and a staff of monster-loving pros from both the haunted house industry and Hollywood.

We had so much fun this past Saturday @ohiofanfest with AEW star The Bunny. Enjoyed telling her all about the haunt and can't wait to show her and The Blade around this season. She looks simply spooktacular rocking that Ghoul Brothers merch!!

Go follow them @alliewrestling and @thebladeofbuffalo and tell them we sent ya!!!

After visiting us on Halloween night, be sure to watch this Halloween special 😱👻 ....
The Mummy And The Monkey's Pumpkin Spice 5: Staying Alive will air on Halloween Night at 9pm est
On OUR channel
http://www.youtube.com/themummyandthemonkey

The Movie: The Dead Next Door
Made in the 80's in Akron Ohio, (zombie gore, not for little kids)
Thanks to the filmmaker J.R. Bookwalter for allowing us to air it!
Parts of our special were filmed at Ghoul Brothers Haunted house in Akron!

You can pick up the Bluray Of The Dead Next Door on Makeflix.com
to support a local indie film maker! It has some amazing behind the scenes stuff!
Hang with us this Halloween night! Share with a friend.

Last weekend to come see us! Friday, Saturday, and Sunday.

There are many haunted houses in Ohio... but, as many people are discovering, none are quite like Ghoul Brothers. Stop by this weekend and get your "freaked out" on!

Tickets and other deals: www.scream13.com

Cleveland Horror hosts The Mummy and the Monkey will be visiting Ghoul Brothers TODAY, October 9th, to film their Halloween special. Join us for a terrorizing fun time. Check out Spirit Light Productions review of Ghoul Brothers. Stay tuned to their YouTube channel for a chance to win 2 Ghoul Brothers tickets and a t-shirt!
https://www.youtube.com/watch?v=HtAaKeyX3YY
#ghoulbrothers #hauntedhouse #scream13

Ghoul Brothers in Akron Ohio is a variety haunt filled with things from your nightmares! This actor focus haunted house has creatures and ghouls coming from ...

WANTED: VICTIMS! We are the best kept secret in Ohio, wall-to-wall monsters in movie quality sets and just $20. Filled with sights and sounds of horror, created by a Hollywood FX artist, and guaranteed to add a few nightmares to your sleep schedule.

We can't SURVIVE without "U". Please, check us out! Please SHARE!
BUY TICKETS NOW: www.scream13.com

Patient #75-0872 escaped, we are trying to get her back as soon as possible. If anyone knows the whereabouts of this persons (with or without doll), please contact us immediately.

Ghoul Brothers (1943) Back in the old days, if you made it through you got your money back. But if you didn't, you probably ended up in sausage.

Ghoul Brothers House of Horrors, ranked the 7th best haunted house attraction in Ohio by "The Scare Factor", is cleaning up the blood and preparing for another weekend of scaring the "stuff" out of you.

Cleveland Horror hosts The Mummy and the Monkey will be visiting Ghoul Brothers on October 9th, to film for their Halloween special. Join us for a terrorizing fun time. Don't worry the monkey had his flea bath!

From our good friends at Fred Martin Superstores: A video SNEAK PEAK of Ghoul Brothers House of Horrors!

DO YOUR PART! Monsters gotta eat and it costs a lot of money to safely operate a portal into a multiverse. If everyone doesn't pull their weight, things can go out of control, even worse.

NIGHTMARE FUEL is served every Friday and Saturday night in October. We are counting on you. The universe is counting on you.
www.scream13.com
#ghoulbrothers #scream13 #scp #scpfoundation #creepypasta

Many brave souls have lost their minds while exploring the dark and dank guts of Ghoul Brothers House Of Horrors ... maybe this guy is the reason???

It's been 2 YEARS since our monsters last fed... they are very hungry!
scream13.com
#hauntedhouse #scream13 #ghoulbrothers

It's always Friday the 13th at GHOUL BROTHERS ... so that makes today a DOUBLE WHAMMY!!! Enjoy!!!

Tickets are $20.00
Cash or Credit / Debit Card
During Halloween Season

Be the first to know and let us send you an email when Ghoul Brothers posts news and promotions. Your email address will not be used for any other purpose, and you can unsubscribe at any time.

Send a message to Ghoul Brothers: 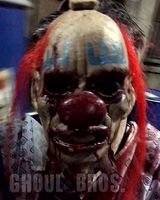 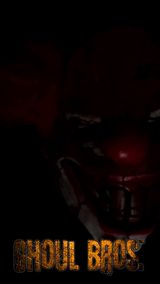 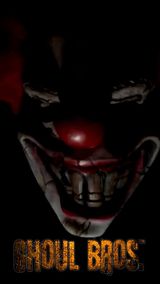 GHOUL BROS: GET YOUR FREAK OUT ON! 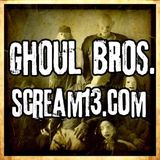 GHOUL BROTHER'S HOUSE OF HORRORS is a mind-blowing, horror-dripping, haunted house attraction, built just for you! Chock full of wall-to-wall monsters, freaks, mutants, undead, mad scientists and some monsters so large they could eat you. We got plenty of new shocks, horror, and chaos and insanity, waiting to scare you to death. Sights, sounds and smells designed by horror experts to FREAK U OUT. GHOUL BROTHERS was lovingly created by Hollywood FX artist and film director, David Barton, and a staff of monster-loving pros from both the haunted house industry and Hollywood. Every year, GHOUL BROTHERS gets bigger, better and badder, and every ticket sold furthers our goal of creating a world-class haunt all horror loving Ohioans will be proud of.

Other Haunted Houses in Akron

This really looks like such a cool haunted house and I can’t believe Tom Holland and Joe Russo have been there! I’m already looking forward to haunted house later this year and have been prepping early by watching horror/thriller films. A really cool indie thriller I watched recently that I thought I’d recommend was a film called Empathy, Inc. It involves a startup tech company that has created a new type of virtual reality experience, but when a recently broke venture capitalist gets involved, he realizes everything isn’t as it seems. The film definitely reminded me of Black Mirror, so if you’re a fan of that I’d highly recommend checking the trailer out on Youtube.
Ghoul Bros was total awesome our son Levi is working their this year and his girlfriend Desiree and my littel man Cain invited me to go tonite and I loved it!! Was scared to death!!🎃 And a huge shout out to Matt for all he does and did for us tonite!!
Who is pumped and ready for tonight's ghoulish rampage?
Best haunt I have ever been to for sure. Takes a lot to really scare me and these guys managed to get me and my group at every turn. Highly recommend to everybody!
Had a great time! Loved the swamp!
This place was awesome !!! Very action packed for a haunted house !! The clown outside was spectacular , along with all the others inside !!! Definately 5 star must go!!
First time there....Awesome haunted house. The actors and set ups were amazing. Loved the swamp area! Definitely worth the price.👍💀
The best haunted house I've ever been in. Five stars, Highly recommended!
Their first! And i was so pleased with how dope it really was. Way to go; highly recommended.