Galerie Fons Welters is a gallery since 1989 for contemporary art in the centre of Amsterdam. Since 2000, the front space functions as the gallery's project space: Playstation, offering recently graduated artists the chance to exhibit their works. 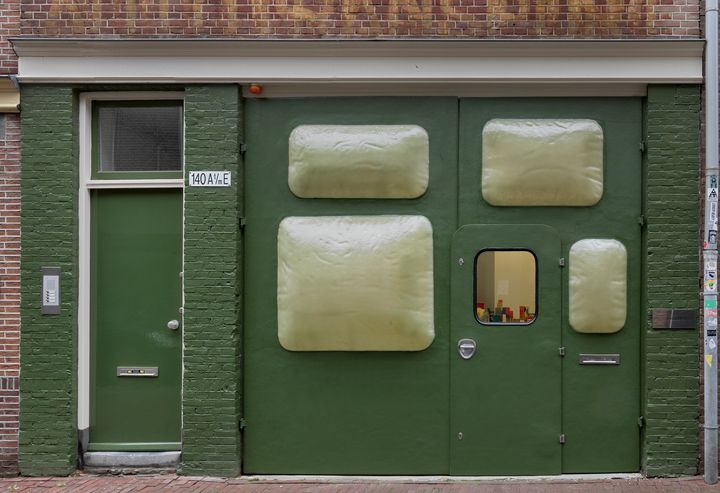 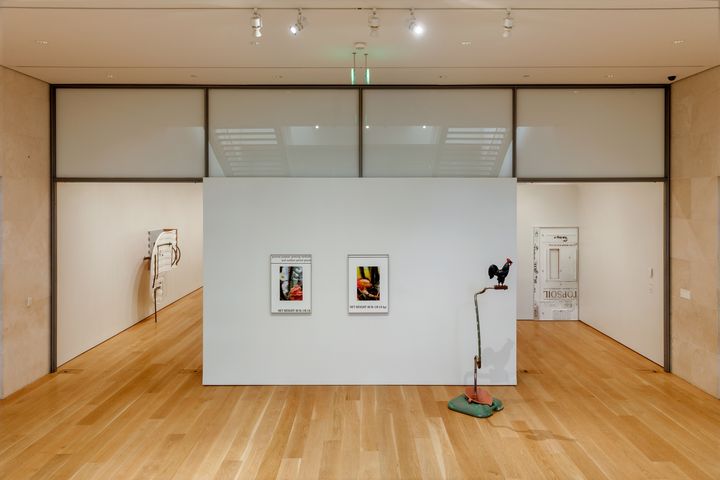 Last weeks to see Magali Reus' exhibition 'A Sentence in Soil' at the Nasher Sculpture Centre, Dallas!⁠
⁠
"In her second major US show, Netherlands-born, London-based artist Magali Reus presents an installation of new work that examines how the forms of simple, recognizable objects can generate an immediate chain of associations when dislocated from their original functions.⁠

Reus’s sculptures often spring from a common object—a lock, a ladder, a no-parking sign—removed from its ordinary use to become a point of departure for the creation of sculptures that explore, expand upon, and contradict the physical properties and cultural baggage of its source objects" 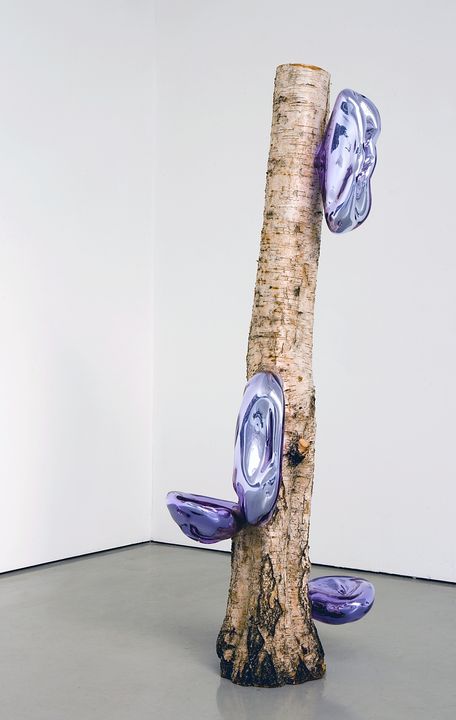 Opening today at Kunsthal KAdE: BAKSTEEN | BRICK with work of Jennifer Tee, among others. On view until January 8.⁠
⁠
"Brick, we see it every day. An ancient building material that occurs frequently in our environment for both the construction of walls and paving. The exhibition BAKSTEEN pays tribute to this material with work by more than fifty artists, architects and designers from the Netherlands and abroad. In new and existing work they show the beauty and expressiveness of fired stone."

For the full text, see link in bio

Opening today at Charim Galerie Wien 'Insolvency, my friend', with Olga Balema, among others. Curated by Nicholas Tammens. 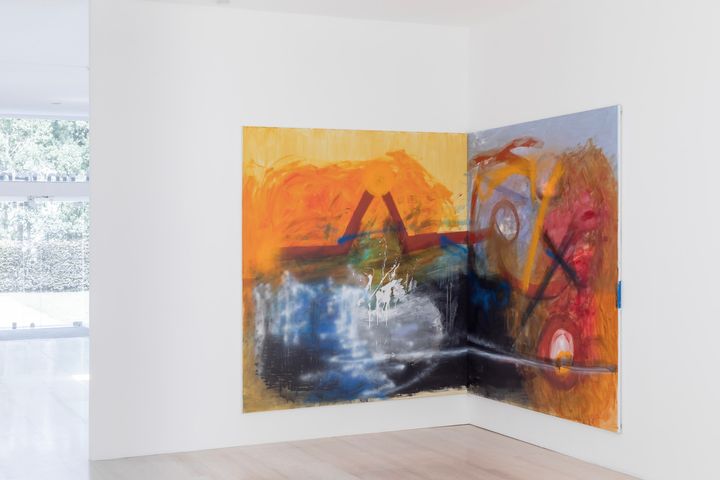 On view until 2 October as part of the 8th Biennial of Painting at Museum Dhondt-Dhaenens, 'The ‘t’ is Silent':

15 October we will open a solo with work by Anh Trần at the gallery!

On view now at the Busan Biennale 'We, on the Rising Wave':

"The exhibition takes Busan as a starting point in reflecting on the stories that remain or lie hidden within the history of Busan since the modern era and the changes in the city’s structure, and examining them in relation to the reality in the world."

"The work of Evelyn Taocheng Wang originates in her interest in the ways in which various elements of individual identity—including gender, ethnicity, class, style, and desires—are shaped amid a complex cultural relationship with autobiographical experiences and social structures. This bears connections with her own experience and narrative as someone who was born and raised in China before studying in Germany and the Netherlands, where she encountered linguistic and cultural alienation and the absence of a feeling of belonging."

For the full text, see link in bio. 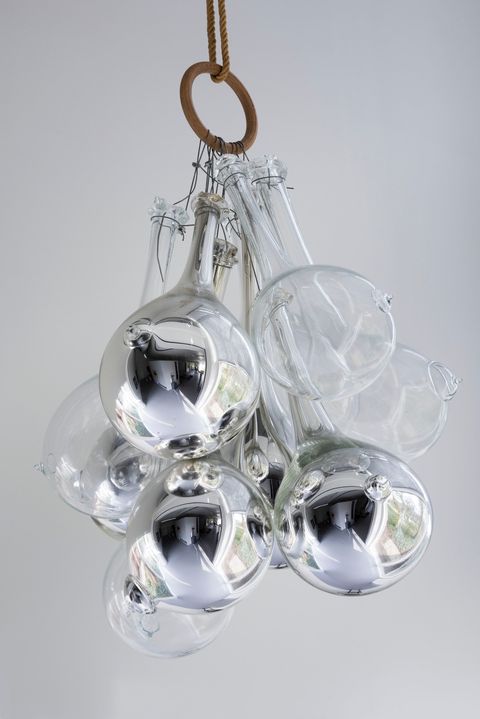 Opening today: Busan Biennale 2022 'We, on the Rising Wave' with work of Jennifer Tee and Evelyn Taocheng Wang, a.o.

"The exhibition takes Busan as a starting point in reflecting on the stories that remain or lie hidden within the history of Busan since the modern era and the changes in the city’s structure, and examining them in relation to the reality in the world."

"Spanning genres such as tapestry, collage, sculpture, installation, and performance, Jennifer Tee’s work shows her interest in cultural interchange and hybrid identity. Close to a decade, she has been producing work in her Tampan Tulip series, in which pressed and dried tulip petals are used to make collage images based on motifs found in Indonesia’s traditional tampan and palepai cloths. Bearing connections with her family’s diasporic narrative, this work encompasses Tee’s explorations of cultural background, migration, cultural identity, lineage, and heritage."

For the full text, see link in bio.

Installation view of Tenant of Culture, Soft Acid, at Camden Art Centre, 2022. On view until 18 September!

"The artist’s point of departure begins in the archives of the gallery, where she uncovered reference to the largely unrecognised mass labour of women in the laundry industry, in 19th Century Britain.

The exhibition draws on and extends the artist’s long-standing exploration of consumer culture and the vast and problematic waste accumulated via the fashion industry. Repurposing discarded garments and accessories into new sculptural forms – alongside a voracious exploration of material possibilities – fabrics are bleached, boiled, dyed, twisted, torn and meticulously reassembled. The resulting works nod to former relics simultaneously desirable and monstrous, a reminder of the fickle cycle of trends and fashion, and the exploitative and often invisible economies of supply and demand."

Part of the group show 'Autofiction', opening this Friday at the gallery, is this work of Gina Fischli:

"A work of art doesn’t come out of nowhere. It is born out of life, a specific reality, which is to say: the materialization of an art practice has to do with rent, studio space, money, family, time, education, mental health, etc., etc. AUTOFICTION focuses on how all of this informs an artwork. It brings together artworks that draw from the personal and autobiographical. Sometimes the results are funny and weird; at other times, they’re tentative and open-ended. Standards and conventions are invoked to provide contrast (Bruno Zhu, Kinke Kooi), and the personal is measured against art historical grandeur (Gina Fischli) and literary and painterly conventions (Trevor Shimizu through the use of memoir, and Perri MacKenzie by inv oking the tradition of the n**e in painting). The everyday and the literal are held up against the gallery wall (Lily van der Stokker), lunch is served (Phung-Tien Phan) and strangers are met (Josiane M.H. Pozi)."

Read the full text by Melanie Bühler on our website. 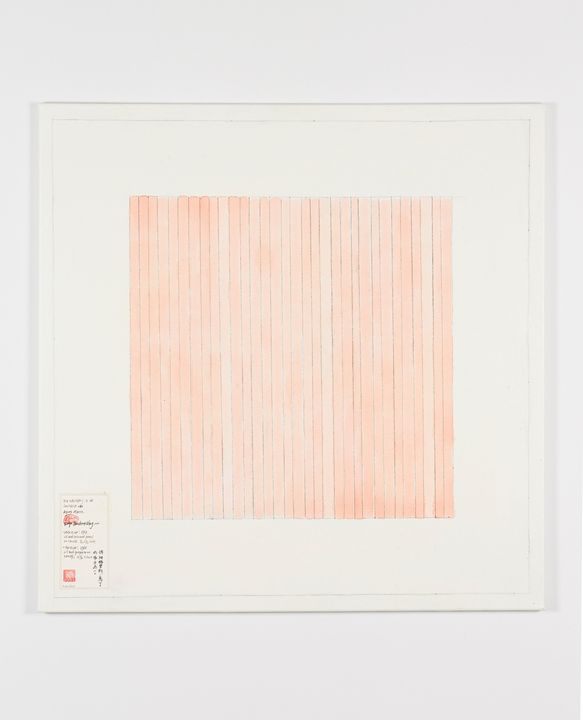 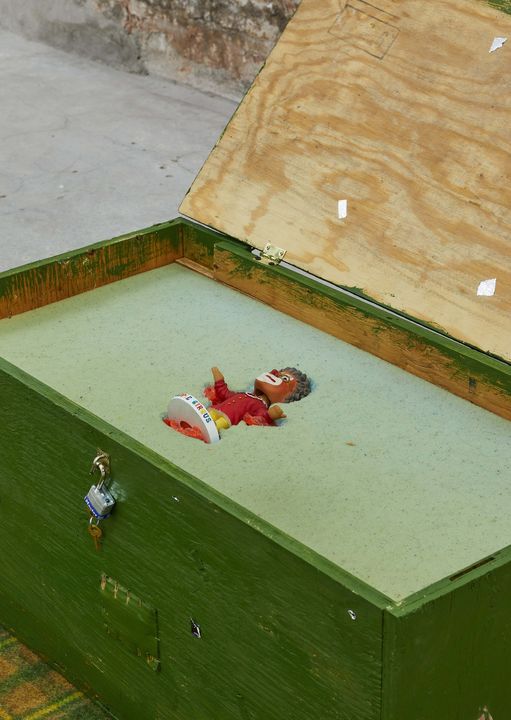 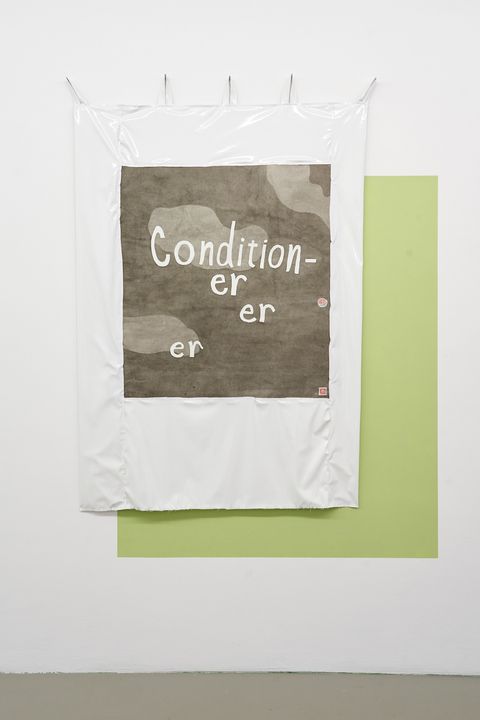 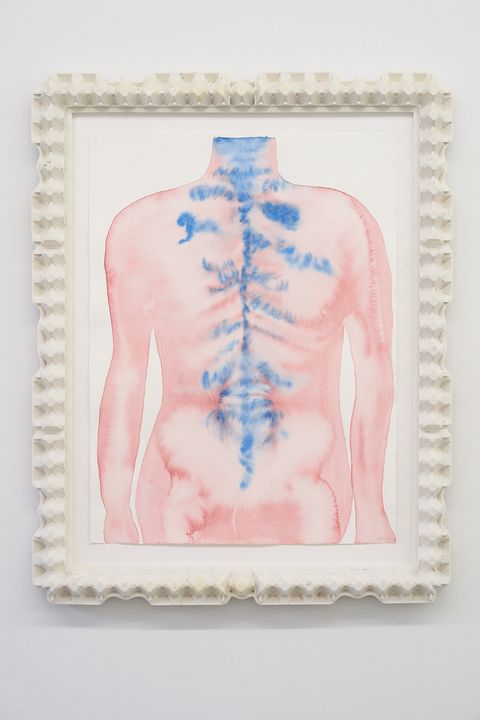 Now on view at Kunstenlab as part of the exhibition The Body Keeps the Score: 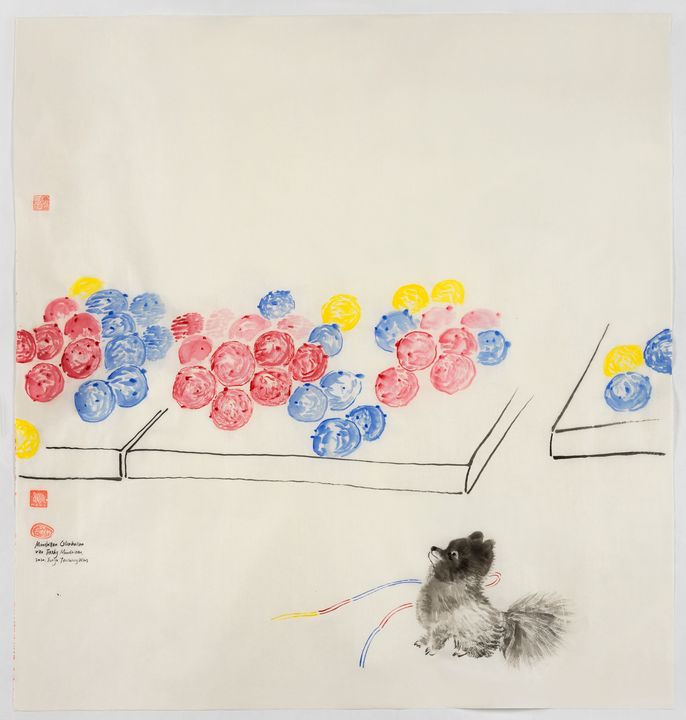 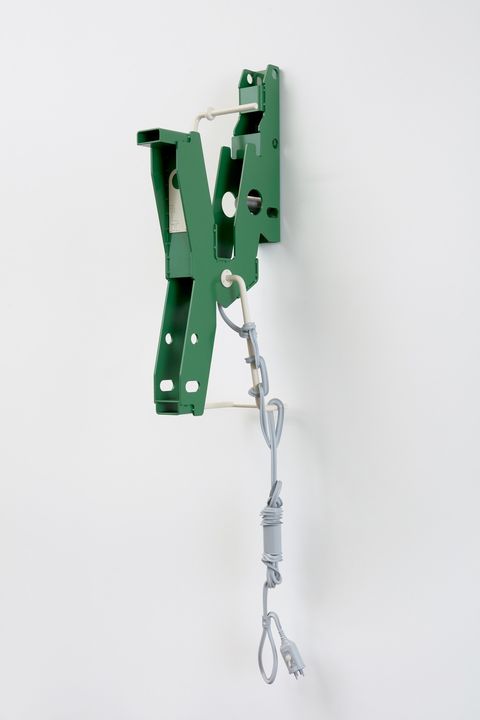 Last day of Job Koelewijn's presentation in the front space!

Opening today at The Glucksman, Ireland: the exhibition 'Fashion Show: Clothing, Art and Activism'. With work of Tenant of Culture, among others. 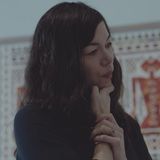 Théophile Blandet’s solo show in the front space is on view as of today. You can see his paintings on iPads, laptops, iWatches and this curved screen until 20 January. http://www.fonswelters.nl/exhibitions/2_20_january__24_november_23_december_groupshow_gallery_artists/about

Galerie Fons Welters is a gallery for emerging contemporary art in Europe. Located in the center of Amsterdam, the gallery presents both national and international artists. Its origins date back to 1984 when Fons Welters opened a gallery space in the Jordaan area. Opening its doors in 1988 in a former garage in Amsterdam's Jordaan area, the gallery has been praised for its distinctive quality of showing young talented artist when they are still relatively unknown. Since its start, the gallery established itself nationally and internationally with its particular focus on installation art and sculptural approaches. Maintaining a diverse exhibition programme, Galerie Fons Welters presents solo exhibitions and group shows of the gallery artists as well as special projects.

An expanded exhibition program was initiated in 2000 when the Playstation program started in the front space of the gallery. Mostly consisting of solo’s by young artist the program introduced the works of among others Jan de C**k, Folkert de Jong, Renzo Martens, Nathaniel Mellors (2005), Magali Reus (2006), Amalia Pica (2006) Melanie Bonajo, of whom some would later join the gallery's roster. The front space now shows gallery artists mixed with young international artists who have not been presented in the Netherlands before.

Throughout the years, the gallery has worked with different generations of artists, such as Aernout Mik (1992), Matthew Monahan (1998), Thomas Houseago (2000), Gabriel Lester (2000), Shana Moulton (2007) and more recently with David Jablonowski (2012) Olga Balema (2013), Evelyn Taocheng Wang (2015), always by starting to work with each one of them in an early and precious moment of their careers. The gallery participates in several international art fairs yearly.