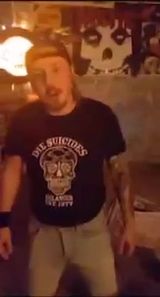 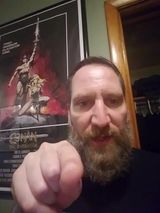 We just received a message from Andrew from IRONFLAME! He`s ready to crush - and so are we 3:-) C U @ Storm Crusher Festival 2019 [official]

+++ NEW INTERVIEW: is LOVE alive ? +++
(German and English versions on our blog)

You have Benjamin from Wheel to thank for this interview. When Aidan and I talked to him last year via Zoom, he recommended is LOVE alive? – A brilliant tip, because the doom band from the Ruhr area has already released a few underground gems. In the hope that many of our readers will check out this outfit in the future, we decided to interview the band’s head Tom Pieper in detail for the Epic Metal Blog. To his great delight, we did not torture him with a saxophone…. We hope you enjoy this article. (André)

André: Hello Tom, thank you for taking time for our blog. How are you doing?

Tom: Thank you for your interest in is LOVE alive?. I am doing quite well so far, like all of us I hope that we can finally leave the pandemic behind us in the foreseeable future and that we can live without restrictions again.

Yes, let’s hope that more will be possible from spring at the latest! In the last few days I have often listened to Eric Wagner’s new album for my review. What significance did this musician have for you?

Trouble are definitely one of my top 10 fave bands, so of course I liked Eric, who significantly shaped the band’s sound with his charismatic voice. He had an incredibly relaxed stage presence and was absolutely at ease. I remember a concert at the Zeche Carl (in Essen, Germany, BB) when he left the stage during the gig to take ci******es from the vending machine. I will never forget that. His death was a bitter loss for the doom scene. Whenever he crossed my path at concerts in the last few years, I slipped him the latest release of is LOVE alive? and he later contacted me regularly by e-mail to praise it.

Which proves once again that Eric had good taste! Which doom classics, I think of albums, have particularly influenced you as a musician?

Those were definitely the Black Sabbath albums from the Ozzy phase, especially Master of Reality, whose sound I still try to achieve. This natural, dry mixing of the instruments, without any reverb effects, is what I find most optimal for our sound, or for doom in general. And of course Saint Vitus, who were a huge influence on is LOVE alive? during our demo phase. My favourites here are Born too late, Die Healing and V. In terms of sound, their last two albums are way ahead for me.

Looking back, how do you rate the doom year 2021? Which releases did you particularly like?

In the last few years it has become apparent that I buy a lot of CDs and vinyl with growing enthusiasm, but hardly any really NEW music. Of course, this is due to the fact that I have been in this scene for over 40 years and have experienced every movement since the NWOBHM. Nothing really blows me away any more, and when something is sold to us as “the new hot sh*t“, I can only smile tiredly about it. In principle, it’s all about mixing familiar stylistic elements in such a way that the end result is something interesting. In my opinion, few of them succeed. I do listen to a lot of “new“ stuff among my friends or on the internet, but I’m seldom so impressed that I want to buy it. So in 2021 I only bought 5 or 6 NEW albums. One of them, to come back to your question, was Preserved in Time by Wheel, who really succeeded in creating a masterpiece. Totally deserved, they are in 3rd place in the DEAF FOREVER poll behind Iron Maiden and Helloween. For me, they would be at number 1, because I don’t appreciate the other two bands mentioned at all any more.

Yes, Wheel was number 2 on both Aidan’s and my best of the year lists. A fantastic album. And we really enjoyed being able to experience the songs live once at the Storm Crusher Birthday Party in Weiden and later again at Keep it True Rising in Würzburg. A different topic: Are there stylistic developments in the doom scene that you don’t like so much? And how “pure“ does doom actually have to be for you? Can you also be enthusiastic about stoner, for example?

As long as no one comes to me with a saxophone, I’m actually very open musically. I always find “pure“ in the sense of original good. You can also achieve an incredible intensity with simple stylistic means. Of course I also like doom bands with an affinity to metal like Solitude Aeturnus or Candlemass. Compositionally, however, I’m more oriented towards combos that have a 70s background, like Pentagram, The Obsessed, etc. I am not a friend of funeral doom or sludge because of the vocal style. Although I like brutal voices in death- or thrash-Metal, I need my doom with clear, conventional vocals. There are also interesting bands in the stoner genre like Unida, Masters Of Reality -, early-Monster Magnet, Brant Bjork and of course Kyuss.

Let’s move on to your band is LOVE alive? – There are certainly a few readers who don’t know you that well yet. Please tell us a little bit about your band history. And how did you come up with this somewhat unusual band name?

OK! I founded the band in 2009/2010 because I wanted to make music myself again. To be creative in terms of songwriting, lyrics, cover design and everything that goes with it. With my 80s speed metal band Chronos we couldn’t make an album back then. So the declared goal was to proudly add an album to my extensive record collection that was completely my own creation. But now it was to be doom. To check out how people record nowadays compared to the 80s, we first made and released three demo CDs (Slow Down 2010, Against 2011 and III Social Jetlag 2014). These demos have already received quite good reviews and especially the third one came quite close to my ideas, so that in 2018 the time was ripe to finally record the album. Final Journey was released in 2019 and we were really surprised how well the record was received, at least in the underground. One excellent review followed the next and the first edition was sold out within four weeks, so we had to repress it again. Full-page interviews in Deaf Forever (issue 31) and Rock Hard (Vol. 386) as an “unsigned band“ are not common, I say. In Deaf Forever (issue 29) the debut was even “own pressing of the issue“ which of course approved our work. Inspired by this “success“ and also because the whole production went absolutely harmoniously I left the original plan to make only ONE album and after a short time we directly started the second one. This production was less harmonious, but that’s another story. The Corona problem made it even more difficult to work together in the studio, for example when mixing the recordings. That, or also the work concerning the cover production via Skype, was very stressful. Nonetheless, in 2020 we released another great album with Second to None. The second album is a bit more varied and playful than the debut, which was also appreciated by the music press. Online mags like streetclip.de (now Saitenkult), powermetal.de, and many others recognised our original style and delighted us again with excellent reviews. Even Götz (Kühnemund, BB) didn’t let us down and nominated us once again as the “self pressing of the issue“ in Deaf Forever (issue 38). I don’t want to brag, but spontaneously I can’t remember any band that has managed this twice in a row. Now concert promoters became aware of us, and since we were in top shape at that time, we wanted to promote Second to None live, of course. Promising single gigs as openers and festival slots were already booked before the pandemic threw a spanner in the works. The band name is simply a reflection on our increasingly superficial world. Greed for power, self-promotion, online addiction, status symbols such as brand-name clothes, the latest mobile phone or followers on Instagram take on such importance that basic values such as love of one’s neighbour, understanding for others or simply standing up for one’s own, perhaps unpopular, opinion fall by the wayside. Furthermore, we didn’t want to operate under a clichéd name that indicates what kind of music we make. I think we succeeded in that.

Thanks for the explanation – mission accomplished, indeed! There have been some changes in the line-up lately. How do you rate the current line-up?

Yes, it’s like that. The fluctuation was quite high with us from the beginning. Also in this respect Tony Iommi seems to be my absolute role model. Compared to Black Sabbath we should be in the Tony Martin era, if I haven’t lost count. I just hope our “Ozzy“ doesn’t come back, because then at the latest I’ll quit. Currently the line-up of the Social Jetlag demo is back with Butcher and Hüsi, which I think is very good. Have a listen at Bandcamp, then you will know approximately what to expect (but only approximately!).

When can we expect new is LOVE alive? material?

Hmmm! At the moment we are working on the material for album 3 and are on a pretty good way. Plan A is to go into the studio in September and then release in January 2023. So that’s still a long time away. But we are not stressing about it.

Are there any live performances planned for 2022?

Actually, we played live quite often in this formation between 2014 and 2017. (You can see some clips on our page or on YouTube) But nothing is planned in this respect, the situation is simply too uncertain. We are concentrating on the new album, for now!

Is there a festival you would particularly like to play with your band?

Of course! Since the Doom Shall Rise festival doesn’t exist anymore, there are still the Hammer Of Doom, KEEP IT TRUE or the Frost and Fire. One may dream, after all.

From a purely qualitative point of view, you would have deserved to play at these festivals without question. A completely different topic: What do you think about streaming services? In the last few weeks, the topic of Spotify has been popping up again and again in my and probably also your Facebook timeline.

As expected, I don’t appreciate it at all. This is also part of the superficiality that I denounce above. I simply need the feel of a CD or vinyl record, to look at the cover, to read the information and lyrics, to grasp the overall work of art with all my senses. OK, if you are on the road a lot for work or travelling, it is of course difficult to carry your record collection with you. In such cases, that’s legitimate for me. But the very fact that the artist simply doesn’t earn any more money if no one buys physical recordings anymore bugs me. So I see the future quite bleak, especially for smaller, independent bands.

Tom, thank you very much for your time! We wish you and your band all the best for the future!

Thank you very much, André. I wish you the same. Thx a lot for supporting is LOVE alive?!

With pleasure. My concluding words are: Listen to more is LOVE alive? – they are very good…