Efremidis aims to present carefully curated exhibitions featuring yet to be discovered, emerging and

Next week on Friday the 11th is the opening of Tyler Dobson's exhibition Plastic Waves.⁠
⁠
Join us at the gallery from 5-8 pm, refreshments and drinks will be provided.⁠
⁠
Alongside Dobson's exhibition will be the opening of "Our interesting life: Metro 3" featuring a monumental 5-panel painting from Günther Förg (1952-2013). ⁠
⁠
#tylerdobson #güntherförg #guntherforg #efremidis 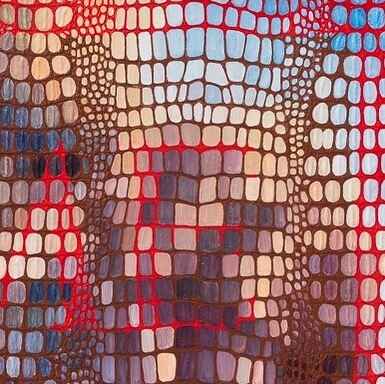 Trapped in a museum of mirrors and edges: the composition of this historical painting bangs against its own edges. The reflections of the mirrors reveal a history of art that is as ridiculous as it is sublime. ⁠
⁠
"Our interesting life" is on view 24/7 in our gallery window. We're here today from 11-6 pm. Featuring the work of Albert Oehlen, Carla-Luisa Reuter, Max Ruf and Hayley Tompkins.⁠
⁠
Pictured: Albert Oehlen⁠
"Im Museum II", 1982⁠
oil, lacquer and mirror on canvas⁠
160 x 160 cm⁠
framed⁠
⁠
#albertoehlen #maxruf #carlaluisareuter #hayleytompkins #efremidis

"Our interesting life" is on view 24/7 in our gallery window. We're here today from 11-6 pm. Featuring the work of Albert Oehlen, Carla-Luisa Reuter, Max Ruf and Hayley Tompkins.⁠
⁠
Max Ruf's works come from an indeterminate era, all that can be discerned is that it is in friction with the present. His paintings often depict spaces and utilities and their painterly construction is aligned with the presence of an inescapable power relation. The absence of a human world is put into conflict with a sensuous painterly approach. Who controls who?⁠
⁠
Image 1 and 2: Max Ruf⁠
"untitled (Zeitfalle)", 2021⁠
oil on canvas⁠
140 x 375 cm⁠
framed⁠
⁠
Image 3: Our interesting life, chapter 1⁠
Efremidis⁠
Installation view⁠
⁠
#albertoehlen #maxruf #carlaluisareuter #hayleytompkins #efremidis

Congratulations to Megan Marrin for her site-specific mural @swissinstitute in New York. On view until September 2022. ⁠
⁠
In Megan Marrin’s practice as a painter, meaning is extracted from cultural and historical relics. Found images of obsolete or unfamiliar equipment used for exercise, hygiene, containment and punishment serve as material to create stark, careful studies of such objects. ⁠
⁠
340 E. 9th Street is a painting of a photograph that accompanies an article published in the April 29, 1968 issue of New York Magazine about the spread of public art across New York City. In the image, the building located at the titular address is shown in profile, adorned on its windowless side with a mural by pop-surrealist Allen D’Arcangelo (1930-1998).⁠
⁠
In 340 E. 9th Street, Marrin’s first public artwork, the readymade image from New York Magazine is outsourced to Colossal Media, the largest hand-painted outdoor advertising company in the world, rendered a block away from the original location of D’Arcangelo’s dreamscape. As such, 340 E. 9th Street frames an artwork of the East Village layered over by time and maintained in memory and documentation.⁠
⁠
Picture 1 and 2: Megan Marrin ⁠
340 E. 9th Street, 2022⁠
Swiss Institute ⁠
⁠
Picture 3 and 4: Megan Marrin ⁠
Barre 7, 2021⁠
oil on canvas on styrofoam⁠
38 x 229 cm⁠
⁠
⁠
#meganmarrin #swissinstitute #efremidis @mmarrin_

Carla-Luisa Reuter’s paintings exist in a world of images: the photographer pulls the trigger and the paint gushes through the wound. Women, models, actresses and interns are carried forth by the flood, both dominated and set loose by Carla-Luisa Reuter’s re-representation.⁠
⁠
"Our interesting life" is on view 24/7 in our gallery window. We're here today from 11-6 pm. Featuring the work of Albert Oehlen, Carla-Luisa Reuter, Max Ruf and Hayley Tompkins.⁠
⁠
Pictured: Carla-Luisa Reuter⁠
"Interior Intern", 2022⁠
oil on synthetic canvas⁠
110 x 155 cm⁠
⁠
#albertoehlen #maxruf #carlaluisareuter #hayleytompkins #efremidis

“Lindsay Lawson’s work form like pearls. Specialized pearlescent paints are applied by hand to 3D prints, growing and inflating, these objects morph surreally from their origins. The grit and grime of modern life, its headlines and disasters, is submitted to a development process that coats her bags, hats and paintings.”

“Our interesting life, chapter I” opens tonight from 5-8pm.

The first chapter of a year long exhibition in the window space of Efremidis.

Aura Rosenberg's exhibition "The Bull + The Girl and The Sigessäule" has been reviewed in Frieze by @claireoua. The review is online now and will be featured in the upcoming print issue.

Next week is the last week to see the exhibition, Aura Rosenbergs first in Berlin for 10 years.

Aura Rosenberg's exhibition "The Bull + The Girl and The Siegessäule" has been reviewed in Frieze by @claireoua. The review is online now and will be featured in the upcoming print issue. ⁠
⁠
Next week is the last week to see the exhibition, Aura Rosenbergs first solo presentation in Berlin for 10 years. ⁠
⁠
@aurarosenberg @chloeellenstead ⁠
⁠
#aurarosenberg

Mathis Altmann's video about his current exhibition "Butcher Block" at Efremidis is out!

In his new exhibition Butcher Block, Mathis Altmann (*1987, Munich) witnesses the millennial moment and its ongoing collapse between work and leisure. In the...

We are excited to announce two new exhibitions for Gallery Weekend Berlin.

You can visit the exhibitions by appointment.
Link: https://termine.gw2021.de/gallery/16-efremidis

If you are unable to attend the exhibitions in person, please join us for the digital live tour on Saturday, 1 May, 2pm [CEST].
Link:https://www.gallery-weekend-berlin.de/journal/gw-live-tours/

Thank you #contemporaryartdaily for the feature!
Marte Eknaes' exhibition will be on view until February 20th. 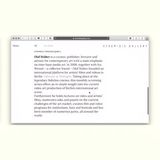