Gallery for contemporary art Esther Schipper founded the gallery in 1989 in Cologne. In 1997 the gallery relocated to Berlin. Through more than three decades of continuous exhibition practice, the gallery has established itself as a major force not only in Germany but in an international context, with offices in Paris and Seoul and representatives in France, Spain, the United States, Latin America, South Korea, Taiwan and China.

The gallery holds up to ten gallery exhibitions as well as multiple off-site projects each year and participates in leading art fairs across the globe. From the very first exhibitions the gallery specialized on establishing institutional support and finding markets for radically experimental and time-based works. Building on the early pioneering program—among them, exhibitions and projects with An

The gallery holds up to ten gallery exhibitions as well as multiple off-site projects each year and participates in leading art fairs across the globe. From the very first exhibitions the gallery specialized on establishing institutional support and finding markets for radically experimental and time-based works. Building on the early pioneering program—among them, exhibitions and projects with An

"La Quinta del Sordo" (House of the Deaf), situated on the outskirts of Madrid, was the home of Francisco de Goya in the years leading up to his exile. In two rooms of the country house, which Goya renovated and expanded, the artist created a series of 14 wall paintings in oil, known as the Black Paintings because of their dark colors, in which the main themes of his work found their last critical expression, in monumental form. Created between 1819 and 1824, the murals were only discovered after Goya’s death. Having acquired the house in 1873, Baron Émile d’Erlanger transferred the paintings to canvas and later donated them to the Spanish state. Sent to the the Museo Nacional del Prado in Madrid, these visionary masterpieces have been on view since 1889. The Prado Museum holds the largest collection of works by Francisco de Goya, including his other most famous paintings, as well as hundreds of drawings and sketchbooks.

Philippe Parreno filmed his science-fictional film inside the Prado Museum, in the rooms where the Black Paintings are exhibited. The film reproduces the relationship between the individual paintings and the house they were originally a part of. Creating a diegetic space, Parreno allows the audience to travel back in time and experience the Pinturas negras in their original setting. When filming at the Prado, the artist was able to capture the paintings up-close in incredible detail, creating a unique level of proximity and intimacy between the paintings and the viewer, with every detail and every brushstroke becoming visible. For the filming Parreno recreated a light setting that mimics the candle light and open fireplace, offering a light setting similar to how the paintings would have been seen at the time.

Visitor information
Five screenings – seances – will be held each day from Monday through Saturday, and four every Sunday. Visitors can reserve viewing time slots. Each screening is limited to 30 visitors. The screenings will be accompanied with a live cello performance, composed especially for the film. Further information via: https://www.museodelprado.es/en/whats-on/exhibition/la-quinta-del-sordo-philippe-parreno/3e1bb872-21af-d18f-9b09-a91e406b3505

Rule-Breaking in the Data Society

Ocula on Hito Steyel at 국립현대미술관 (National Museum of Modern and Contemporary Art, Korea in Seoul)

Hito Steyerl's first solo exhibition in Asia explores the patterns in our data-centric society and how to break free.

Will you attend the General Idea Symposium? Join us for a day of talks exploring the world of GI on June 4th 10:00 to 16:30 EDT at the National Gallery of Canada, Ottawa.

Will you attend the General Idea Symposium? Join us for a day of talks exploring the world of GI on June 4th 10:00 to 16:30 EDT at the National Gallery of Canada, Ottawa.

The symposium will be moderated by Philip Monk, and the speakers will include Jon Davies, Kathryn Franklin, Robin McDonald, Jonathan Lofft, Antje Krause-Wahl and Teneshia Samuel

Not in Canada? Fear not! The event will also be live streamed on Zoom.

Go to the link below to find out more.
https://www.gallery.ca/whats-on/calendar/general-idea-symposium

Opening tomorrow, Wednesday June 1, 7pm, the Hamburger Bahnhof holds an exhibition entitled Under Construction, presenting the latest additions to the Nationalgalerie collection, including works by.

Included in the exhibition will be three works from Ceal Floyer, two works that play on our expectations of what we may encounter in an exhibition space and also on our notion of what an art work is – Peel, 2003, a soundless video projection where empty white walls raise the expectation that objects will be shown, and Projection, 1997, a slide projector that projects a roughly rectangular field of light, as if the slide were empty, yet on closer inspection one notices the image of a nail. The third work in the exhibition from Floyer, Watercolour, 2004, consists of a monitor showing a white screen which turns blue, then green, then red; the alterations of colour corresponding to the chromatic make-up of video technology. But like an aural mnemonic, the subtle ‘plink, plink’ of the soundtrack gently coaches the realization that what is being shown is a close up of a glass of water with a brush being cleaned.

For the exhibition Daniel Steegmann Mangrané has created a large curtain work consisting of three separate sections, that are placed closely together, oscillating between appearing as a diaphanous screen and semi-solid object, existing in a hybrid state between corporeality and immateriality. Additionally, the artist has conceived the whole space in which the curtains are on view, selecting and placing other works of his as well as a historical work from the collection in a way that creates multiple perspectives and connections with and through the curtains.

More via link in bio.

The Art Newspaper: General Idea more relevant than ever at the National Gallery of Canada

Esther Schipper updated their info in the about section.

Esther Schipper updated their info in the about section.

The Swiss Arts Council Pro Helvetia has selected the project Neighbourhood by Karin Sander and Philip Ursprung for the Swiss Pavilion of 18th International Architecture Biennale in Venice, in 2023, after an open competition with 48 submissions.

The project Neighbourhood deals with the relationship – both in architectural and political terms – between the Swiss Pavilion, built in 1952 by Bruno Giacometti, and the Venezuelan Pavilion, created in 1954 by Italian architect Carlo Scarpa. The two pavilions stand next to each other and display perceptible similarities. The proximity of the two buildings is also a reflection of the close personal relationship between the two architects. The Pro Helvetia jury was impressed by the simplicity of the concept and by the broad-based knowledge and experience of the project team, which sees architecture as an integral component of art and approaches it accordingly in the project. The immediate neighbourhood of the Swiss Pavilion now has a further political dimension, given the current geopolitical situation: aside from the Venezuelan Pavilion, which has been standing empty for years, the future of the neighboring Russian Pavilion remains uncertain as well.

Art:LIVE is a series of original video content that brings to the viewer accessible expert insights into recent developments in contemporary art and culture,...

It's time for your Letter from Berlin!

This month we take you around the world with exhibitions and Fairs. Head to the link in bio for more on:

@studiodavidclaerbout's final weeks at @estherschipperberlin, as well as a look back to last spring with our exhibition L’Invitation au voyage.

A stunning presentation of our artists at @taipeidangdai, that caught the eye of @voguetaiwan Editor-in-Chief, @sunles.

A chance to see @timeasperspective's The Hidden Conference: About the Shelf and Mantel, 2015, at @jeudepaumeparis, as well as @animal_que_no_existeix and @annveronicajanssens at Fata Morgana, the first edition of the Jeu de Paume festival.

And much more – link in bio!

@estherschipperberlin and @simon.fujiwara bring all the fun to the @friezeofficial NY fair 🎡. With works ranging from collage, drawing, painting and sculpture to stop-motion animation, there is a Who for each and every one of you! 💛

Not in the Big 🍎 to stop by? Click the link in @estherschipperberlin's bio for links to experience the Frieze OVR and @vortic.art 3D Booth.

Between 1996 and 1997, Julia Scher photographed seven children wearing pink uniforms: Lena, Grace, Andy, Andre, Brandon, Jodi and Zoë. Some of them held up batons or gas masks, others just stared defiantly at the camera. In the following months, Scher enlarged these images and integrated them into an installation which traveled and evolved in time: 1997, Chicago; 1998, New York; 2000, Bordeaux ; 2018–2019, Berlin. Over the years, the principle has remained the same: a child-sized control desk surrounded by distorting mirrors bathed in twilight-colored lights. The recorded voice of the artist warns the audience: “There are live cameras filming you [...] Attention. Your size may change”. This is Wonderland, an upside-down world where children watch over adults downsized in the reflections of mirrors.

Wonderland is the second part of The Artificial Kid series of exhibitions and events at Maison Populaire. This multimedia environment where children act as authority figures, plays on the context of the Maison Populaire, whose members are largely children encouraged to leave their parents on the doorstep and where teenagers are considered adults from the age of 13. Created for children, Wonderland parodies adults' attitudes towards protection or threat, and their own infantilization in surveillance contexts.

Founded in 1966 in Montreuil, Maison Populaire is a cultural center dedicated to popular education. Focusing on research and experimentation, Maison Populaire hosts an art center and each year invites a different curator for a cycle of exhibitions and events.

Simon Fujiwara, Once Upon a Who? 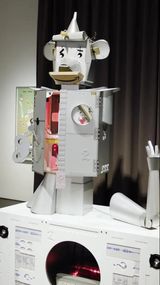 Rosa Barba, In a Perpetual Now at the Neue Nationalgalerie, Berlin. 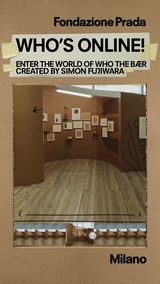 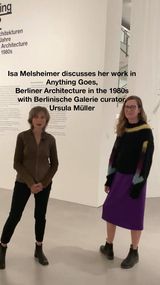 All Access – Isa Melsheimer, Anything Goes, Berliner Architecture in the 1980s 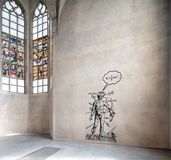 Esther Schipper is pleased to participate in Galerieplattform_DE, an initiative of ART COLOGNE.⁠⁠ 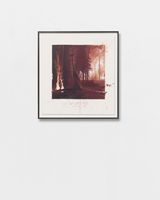 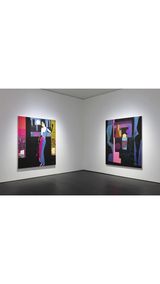 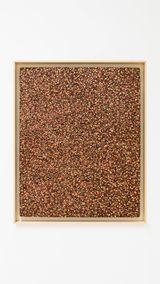 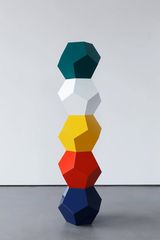 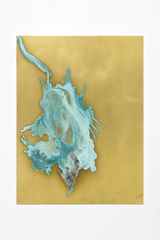