⚽🥳🎱 It's finally there! The UEFA EURO 2021 starts on Friday and we will have a lot of matches live on our screen at the BATA! During the group stage we will show all top matches and other selected games. From the knockout stage all matches will be shown. The calendar is updated frequently. Additional matches can be shown on request. https://www.batabar.com/en/calendar/

In good weather we will have the matches on the screen in our outdoor summer garden, too.

🎉🎉🎉🎱🎱🎱🤑🤑 Yes! The new Bata Card is here and everyone can have one. Here you can find all the information and book:

Borrowing from Paul Newman as "Fast" Eddie Felson in "The Color of Money," we'll soon be saying: Hey, we're back!

From Friday, June 4th, 2021, we may open the indoor areas at the Bata for you. You can then play as usual at our 12 pool tables, darts and foosball. We open again daily at 3 pm. And to make it really fun, we have all tables freshly covered this week.

Nothing goes without Corona rules

Of course, the familiar rules also apply inside: Wear a mask, keep your distance, leave contact information and GGG: tested negative, fully vaccinated or recovered. Outside, by the way, testing is no longer mandatory as of Friday. All details about the current regulations can also be found at www.berlin.de/corona

By the way, serving of alcohol is now only prohibited from 0-5.

So, briefly summarized: Starting from Friday it's time to hustle some pool at the Bata again! We are looking forward to welcoming you! Yay! 🎉🎱🥳 From Friday, May 21, 2021 we open our Bata summer garden always FRIDAY and SATURDAY for you (tested, vaccinated or recovered). On all other days the summer garden can be booked exclusively by you.

We'd love to watch Matchroom Pool's Mosconi Cup 2020 together with you at Bata Bar & Billiards, but not this year... At least we can watch it online on DAZN!

The big names are out for Mosconi Cup Team USA to keep the dream alive at 2-8 down. Sky Woodward and SVB sill begin the day with a doubles vs. Joshua Filler and Ouschan Albin. In the second match the "Killer" faces Woodward again in a rematach of last years final showdown. More doubles action coming with Fedor Gorst and Ouschan paying Billy Thorpe and Chris Robinson Pool Player. And if Europe hasn't won yet, Jayson Shaw will round off the evening in a classic against Shane VanBoening. It doesn't get any better than this! 😍

We had hoped not to have to write it again, but: From today on the Bata will be closed due to COVID-19 until probably the end of November. We hope to see you all again afterwards!

We're stoked to be part of this list of the top 10 pool clubs in Europe. Thank you Ralph for presenting our place!

A selection of ten of the best billiard clubs of EUROPE presented by the best players on the continent! World, European and National champions will give u a ...

You have probably already heard it from the media: The Berlin Senate has decided that from Saturday onwards bars and restaurants, including the Bata Bar & Billiards, will have to close at 11 p.m. due to increasing infection rates with Covid-19 / Corona. This is valid until 31.10.2020. Of course, as always, we will adhere to the current regulations. On Friday, October 9, we will still open as usual.

But we also have a little good news: As long as this restriction applies, we will open at noon on the weekend, i.e. Sat and Sun, as we did earlier this year.

Regardless of these new restrictions, the well-known rules will of course still apply: Keep your distance, keep your mask on (except at your table), wash your hands.

We would be pleased if you would continue to visit us!

Wouldn't it be great if you could play pool or table football outside in this heat? Oh, you can? Oh, at our place? Well then 😁 Our new summer beer garden at Bata Bar & Billiards is there for you every day. It is also really good for birthday parties or whatever else you want to celebrate! @ Bata Bar & Billiards

We are court-ing you! New summer beer garden with billiard table at Bata Bar & Billiards from 25.7.2020

For years we have had an idea: to set up pool tables outside in the summer. Well, from now on, that idea is reality.

Anyone who's been to the Bata these last few days has seen it: Our summer beer garden with a cosy lounge (with a real birch tree) and a nice wooden pavilion with foosball table and probably the only outdoor 9-foot pool table in Berlin.

Next Saturday, July 25th, you can test the beer garden live and in color from 6 pm on. We will even fire up the barbecue for you!

After that, we will always open the beer garden during the regular opening hours of the Bata, provided the weather is suitable.

So, summery weather is no longer a reason not to play pool!

We are looking forward to you. @ Bata Bar & Billiards

Our new flyer, which mentions our new beer garden :) Yes, from Saturday evening at about 6 p.m. we officially start with the Bata beer garden at Heidestraße 50 with lounge, pool table and table football. And besides that we are always there for you with 12 pool tables, table football, darts, pinball machines, nice people, good music and finest drinks, in summer and winter!

Who said there was no angle? 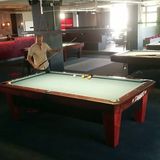 Another classic trickshot performed by our house pro Ralph Eckert... (by the way: he did it at his first try) 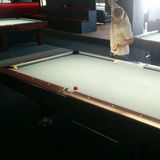 Pool can be so easy when you have a plastic pipe. Featuring our house pro and former trickshot world champion Ralph Eckert.