It's Comedy in English. On a Boat. On the Spree. It's Laughing Spree Comedy. Check out great comedy The most scenic comedy venue in Berlin. So that's something at least.

We're ready for another fantastic Sunday show on the Laughboat! Dragos and Chris will be tearing up Riga this weekend, so you will be graced by the amazing Dan Stern as your guest host.

Join us! Make a reservation here to guarantee yourself a seat:
https://laughingspree2012.eventbrite.de/?aff=ls

Looking good at the Mercedes-Benz Arena Berlin! Ready when you are, Louis.

Getting hyped for tonight!!

Back on the boat tonight be sure to join us for a fun night out !!

Due to the clarification of the COVID rules yesterday, we had to slightly adjust the set up of the show. On the positive side, we were now able to release some of the tickets we had to hold back until this clarification.

You can get them here: https://louis-ck-berlin.eventbrite.co.uk/?aff=LaughingSpreepostshare
(or at Eventim or through the Mercedes-Benz Arena box office)

Louis C.K. is coming to Berlin and Germany for the very first time. It is his only date in this region!

We are exremely grateful to the fantastic audience last night giving to a great cause!

Thank you for a wonderful night and your generous donations to savelife.in.ua!

Hey gang, we had so much fun again this week for our Sunday, Monday and Tuesday shows!

Join us for the rest of the week. Like at this show: Expat & Immigrat Comedy Show - a hilarious, practical show all about (not) integrating in Berlin.
It's a FREE ENTRY donation show with FREE SHOTs in the heart of Berlin Mitte.
https://expat-or-immigrant13.eventbrite.co.uk/?aff=lspage

is our first show of the year. Looking forward to seeing you all again very soon!

It's Berlin's #1 (and only) English Comedy Show on a Boat. On the Spree. It's Laughing Spree Comedy!

What an absolute banger to start our run of Eastern European Comedy Specials at their new home, Belushi's Berlin.

Thank you all for coming out and making it a great night! We're so gratefule!

And thanks to our wonderful Eastern European Comedians for bringing the funny sad!
Pavlo Comedy
Anja Woot
Dima Arbooze

Only 7 Discounted Eventbrite Tickets left for our monthly Eastern European Comedy Special!! Come on out! It's funny, cause it's sad.

It's our very first show at the new venue - Belushi's Berlin.

Get tickets NOW for a great discount (30% off the door price) here: https://eastern-european-comedy21.eventbrite.de

Take a hilarious peak back behind the Iron Curtain at the Wall near the Berlin Wall. Former East bloc comedians bringing you the laugh

What a brilliant week last week was. Here are some pictures from last Sunday's show!

Join us again THIS SUNDAY at Laughing Spree: English Comedy on a BOAT (FREE SHOTS) 24.10. for some more massive laughs!

We had an amazing time past night! Sundays are really fun days now thanks to all you lovely people!

See you buoys and gulls aboard the Laughboat very soon!

Such a brilliant time Thanks everyone! See you all on Sunday for Laughing Spree: English Comedy on a BOAT (FREE SHOTS) 26.09.

What a brilliant show last night!! Join us ofr this one to have at least as much fun here!! Can't wait to see the rest of you buoys and gulls aboard the Laughboat!

Fantastic show last night! Thank you all for coming out and making it an unforgettable one!

THIS IS OUR BIG ANNOUNCEMENT. It's "hidden" in our event poster. If you can find it, write a comment and the first one to find the correct thing, gets a 10€ drink voucher for The Floating Lounge Bar.

See you buoys and gulls tonight for another Laughing Spree: English Comedy on a BOAT (FREE SHOTS) 16.08.

We got some great news coming, everyone!

More on Monday. Have a lovely weekend!

A couple of cool shots from last night!

Fantastic show yesterday! Thanks a ton to all the lovely people who came out and made it unforgettable. Thanks also to the brilliant comedians.

See you buoys and gulls aboard next week!

Absolute belter of a show last night. Thanks everyone for coming out!

Lots of fun at last night's boat show. Thanks so much for coming out!
Come out tonight for another wild ride!

Our last outing at Backyard Comedy was a great, massive Laughfest.
Join us for the next one!!

Thank you all for coming out last night and making it a great show! Thanks to all the great performera, including , and .m.belkin (not pictured) for making us all laugh.

See you guys tonight at New in Town Comedy. Or on Friday for our big outdoors show Backyard Comedy.

Great show tonight! Thanks everyone for coming out to our 6th New in Town Showcase.

We got a great 4th of July USA special tomorrow. So, if you love laughing with or at Americans, join us!

Another great night with .woot join us again next week and tonight for New In Town

The Dark Comedy Mic at was next level - join us again in 2 weeks!

After a hiatus due to Corona related concerns, now that all our staff is fully vaccinated, FREE SHOTs are back.
BOOM!

Come and join us TONIGHT!

Check us out on the next shows:

Get your tickets before they run out!

We are super excited to do our English Stand-Up Comedy Shows again. Even more so, since next week we'll be back on the boat.

Some jokes to keep you fresh in the pandemic - until the show return!

Hope you too have a great Hungover Sunday with a drunk German dog! 🇩🇪

This was from our lovely Floating Lounge fundraiser show. Thanks again, everyone for joining, being up for some shenanigans with us and helping out our favourite comedy venue in Berlin. 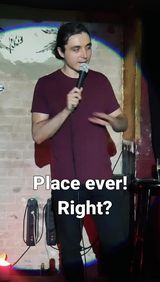 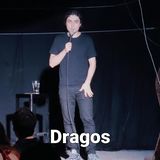 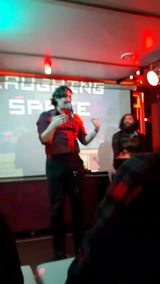 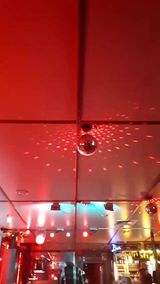 Here is what the audience says:

“ Not only extremely funny, but great atmosphere too! I would definitely recommend visiting on Mondays, I know I will for sure. 10/10 “ - Din, Bosnia

“ Seriously quality comedy! Thanks to the comedians and the very funny host Chris for a great first night for me in Berlin “ - Madison, USA

“ It was absolutely hilarious. Had a great time. The comedians where great and really friendly after the show. Would definitely recommend! “ - Waleed, Canada

“ Amazing Host, great and broad variety of comedians. Absolutely advisable to visit! “ - Christopher, Germany (look, we even made a German laugh!!^^)

“ Since swingers clubs are closed on Mondays, the show was the best plan B in Berlin! 😂😂😂 Thanks guys “ - Bára, Czech Republic

I'm guest hosting at Laughing Spree Comedy Sunday night!
SHOW at 7:30PM with a wonderful lineup of comedians:
Gauri B, Karl Pinzon Bustillo, Julieta's Comedy, lu noboa., Sandy Jones Comedy, William Engle and Anastasia Mukhina ⛵️⛵️⛵️
Laughing Spree: English Comedy on a BOAT (FREE SHOTS) 10.04.
It'll look kind of like this photo, but without the hat.
IMPORTANT NOTE:
The performance by Louis CK at the Mercedes-Benz Arena on May 20th 2020 is being postponed due to official directives by the state of Berlin.
The event will be moved to 14.05.2021. This show will feature brand new mature content material. All tickets will remain valid for this replacement date.
Lots of fun at Laughing Spree Comedy last night. Massive show with 10 acts. Awesome audience - thanks so much for coming out and supporting us!
Can you make people laugh? On stage? If the answer is NO but you like watching other people try, in English, in real life, then you're in for a treat.

The Berlin New Stand-Up Award is hosting its second annual competition in venues across the city from this week until March. ⁠
⁠
With Europe's fastest-growing English-language comedy scene, Berlin has become a mecca for humour nerds keen to flex their stand-up credentials and earns some LOLs.