It's Melbourne's best new comedy club! Basement Comedy hosts the absolute best of Australian comedy every Saturday night in the heart of Melbourne!

Our regular show is FULL TONIGHT,
So we've ADDED AN EXTRA SHOW at 7pm!
Special guests!

If you don't get your ticket tonight, I reckon they'll be all gone in the morning!
Tix: http://melbournecomedy.com.au/

Next Saturday night: KITTY FLANAGAN ("Fisk") is in the Basement!
And it's already selling! Tickets will be all gone mid-week, so get in quick! One show only! 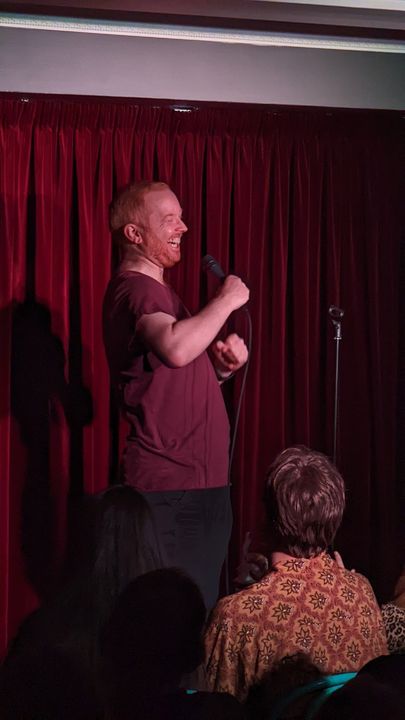 What a night! Two full houses at 7pm and 8.30pm last night in the basement! Luke McGregor headlined, and Celia Pacquola did a spot on the early show! So goooooood!
And that's not all!
Next Saturday: KITTY FLANAGAN!
THIS. WILL. SELL. OUT. QUICK.

7pm: ABOUT TO SELL OUT!
8.30pm: Still some tickets left but selling quick!

SATURDAY! 2 shows! It's gonna be huge!

HUGE weekend coming up, with our final 10.45pm late shows of the comedy festival! Guaranteed great lineups, we promise!
Then we're back to regular Friday/Saturday shows next week!
Tix: http://melbournecomedy.com.au/

It's the final week of comedy festival, which means our nightly 8.30pm show wraps up this Sunday!
Full houses and superstar drop-ins! Tickets are going super-quick, so get in while you still can!
TICKETS: http://melbournecomedy.com.au/

Big late night shows this Friday and Saturday, 10.45pm!
Always big names dropping in!
The BEST place for the last drink and laugh of the night!
Tix: http://melbournecomedy.com.au/

Our 8.30pm showcase is SELLING OUT most nights! Get in early! It's full of famous faces, TV names, and more!
We've even added early 7.15pm shows this Friday/Saturday!
Couple of HUGE names dropping in over the weekend...
Tix: http://melbournecomedy.com.au/

We're running a RED-HOT SHOWCASE every night of the comedy festival at 8.30pm (Sundays at 7.30pm)!
It's got the best of local TV faces, plus interstate and overseas comedians! About to sell out tonight, s*ld out tomorrow!
Get your tickets for next week already!
TIX: http://melbournecomedy.com.au/

Hey! Our legendary LATE SHOW is back for the next month!
Every Friday/Saturday at 10.45pm, the best of the comedy festival drop by for one last gig (and drink)!
Always RED-HOT, big name surprises!
Tix: http://melbournecomedy.com.au/

Awesome to be back to full capacity and full houses! HUGE weekend just gone!
This Wednesday, we start NIGHTLY shows at 8.30pm with the best of the comedy festival dropping in EVERY night!
And of course, our legendary LATE SHOWS at 10.45pm every weekend!
Tix: http://melbournecomedy.com.au/

TONIGHT!
Online sales have closed (s*ld out),
But we've saved 12 tickets for the door, opening at 7.30pm SHARP!
Don't be late. We can't fit any more in!

AWESOME secret lineup this week, just before the comedy festival starts!
Your last chance to see some big names in the basement before their big theatre shows start! It's so great to get back to FULL HOUSES including over this last weekend for headliner MARTY SHEARGOLD!
Another huge lineup next weekend!

Awesome chance to see MARTY SHEARGOLD outside of a big expensive theatre ticket! THIS WEEKEND!
Star of "Have You Been Paying Attention?", "Fisk" and his own Triple M breakfast show!
Plus some great special guests!

Basement Comedy Club is the hottest comedy club in Australia, ALWAYS bringing you the biggest names and best comedians in the country, and beyond! A guaranteed top quality night... Look no further! Every Friday and Saturday in the Melbourne CBD! (Choose tickets carefully, no refunds)

Oh my god. What a bunch of amazing surprise guests dropped in over the weekend for our big BIG 5th birthday shows on Friday and Saturday!
MARTY SHEARGOLD headlines next weekend!
Tix: http://melbournecomedy.com.au/

FRIDAY/SATURDAY!
It's our massive 5th Birthday Shows! With very special guests from TV and radio to help celebrate!
TIX: https://www.trybooking.com/events/landing?eid=689896

Basement Comedy Club is the hottest comedy club in Australia, ALWAYS bringing you the biggest names and best comedians in the country, and beyond! A guaranteed top quality night... Look no further! Every Friday and Saturday in the Melbourne CBD! (Choose tickets carefully, no refunds)

Come down this Friday and Saturday to celebrate 5 years down in the basement!
Some CRACKING surprise guests confirmed over the two nights!

It's our 5th birthday this weekend!
This Friday and Saturday nights, we've got some BIG surprise names dropping down to celebrate!
Tickets: http://melbournecomedy.com.au/

ONLINE TICKETS ARE GONE FOR TONIGHT'S SHOW!!!
We've saved 15 tickets on the door at 7.30pm sharp.
Get in QUICK!

It's been great to get back to full capacity!
Tonight is looking good and tomorrow is about to sell out!

HUGE weekend in the basement coming up!
Tix: http://melbournecomedy.com.au/

Be the first to know and let us send you an email when Basement Comedy Club posts news and promotions. Your email address will not be used for any other purpose, and you can unsubscribe at any time.

Other Comedy clubs in Melbourne

A way cool gig. Great to catch up with such a talented bunch. Audience were a fab bunch, they got their moneys worth and more.
💜☮️🤣
ATTENTION: TICKETHOLDERS FOR TONIGHT
Due to staff shortages thanks to Covid,
We're moving TONIGHT'S SHOW around the corner to Basement Comedy Club! (Beneath the European Bier Cafe, 120 Exhibition St).
All ticketholders have been emailed, but there's a small handful of tickets left.
Tix: http://melbournecomedy.com.au/
Sometimes you guys ask if we have shows on weekends. We don't at Spleen, but our sister comedy venue Basement Comedy Club DOES!
Absolutely CRAZY lineup FRIDAY NIGHT at 7pm. Afterwork SUPERSTAR show. It's a comedy gala with ALL big names from TV!
Tickets: http://melbournecomedy.com.au/
Just remembered my job is fun. Thanks to the crowd tonight. Especially Will the TikTok accountant, the cliched Canadian Doctors and Karen the Neuroscientist Basement Comedy Club.
I’M GOING BACK TO WORK BABY!!! Come along to Basement Comedy Club and enjoy life again!
Jumping on stage at Basement Comedy Club tomorrow night!
Smashed it!! Xx
Hey! Did you listen to the latest episode, our FIRST LIVE SHOW IN NEARLY A YEAR, recorded live at Basement Comedy Club in Melbourne, with awesome guests Peter Helliar, Tom Ballard and Nick Capper? It was SO much fun to do, hope it was as good to listen to!
Thoughts? Favorite bits?
DOWNLOAD: https://littledumdumclub.com/node/434
NEW, FREE, FUNNY Little Dum Dum Club episode,
Recorded LIVE in Melbourne at Basement Comedy Club,
with great guests Peter Helliar, Tom Ballard and Nick Capper!
Our first live show in like 10 years or something (fact check this first), and Dassalo goes all-out with some sweet visuals for this audio medium, Capper's had some pizza troubles and Ballard gets bullied a lot. Thank God we're back. An absolute ripper!
DOWNLOAD: https://littledumdumclub.com/node/434
If you want to take a listen back to our chats with comedians, you can subscribe to the podcast from the OCR FM website, iTunes or Spotify.
https://podcasts.apple.com/au/podcast/lol-radio/id1462883093

And as Facebook has taken away the 'notes' function we can't share all the ticket information like we used to. So here's some links for the LOL Radio Comedy Gig Guide. Check out the ‘Events’ section of this page for more.

Other Comedy clubs in Melbourne (show all)