⚡Throwback⚡ You can still play the first-ever winner of the Freeplay Awards non-digital category: Anthony Sweet's Outside These City Walls, 2013 https://www.handwrittengames.com/outside-these-city-walls

Remember this night? Big shout-out to Hovergardenfor sharing so many fun times with Freeplay over the years🌈

Been part of a Freeplay event in the past? Tell us what you think we should do next - survey closes Friday: https://www.freeplay.net.au/australian-gamers-and-games-makers-what-do-you-need/

While we’re asking for your feedback on Freeplay, we’ve been strolling back through the archives. Can you believe that Untitled Goose Game, Wayward Strand AND Florence were all in the one Parallels lineup? Check out the trailer from 2017.

And don’t forget to take our survey! https://bit.ly/3sLVR7m Thanks to everyone who's given feedback so far

What should Freeplay do next? We'd love your help with a ⭐5-minute survey⭐ as we take some time to think about our future. Have your say by March 18: https://www.freeplay.net.au/australian-gamers-and-games-makers-what-do-you-need

Image: The Freeplay Zone from Parallels 2021, showing a pixel-art rendition of the outside of RMIT's Capitol theatre. There is a tree and a street and cool people waiting to see some great games.

A short visual novel where players help the main protagonist, Abigail, make decisions on how to spend her day - balancing work, school, and relationships.

A short, 'active' idle game reminding us of the interconnected web that is our minds, our bodies, our environment, and our communities.

A game about a specific location in the artist's local area in Victoria; using it as a terrarium to explore our relationship with often overlooked pieces of nature.

A game that explores communication in isolation by letting players write and draw messages to one another on a serene island.

Unveil five personas who inhabited a strange enclave known as Here. Their personal rituals, cosmologies and experiences are revealed through poetic form.

Station Street is an homage to country Victoria. Players experience a day in the life of a country town from the perspective of its residents and the roles they play.

You’re invited to my place~
When all this began, I left my home and most of my belongings behind. My apartment, recreated from memory.

👀 We'll have additions to this line-up in 2022, watch this space! 💖 Until then, we hope you enjoy playing some playful, poetic, and personal micro-scale experimental games by local artists 🥰

👉 All games can be found on the #VictoriaTogether website: https://together.vic.gov.au/games/freeplays-games-series

The Freeplay Parallels 2021 Showcase is happening at 7pm AEDT tonight! 🎉

We've got seven fabulous speakers presenting their games and taking us through their journeys. ✨

There's still time to pick up your merch: https://freeplay.bigcartel.com/

Join us for an online showcase of unique, experimental & personal independent games!
📰 https://freeplay.net.au/announcing-parallels-2021/

Our Parallels identity this year was made by the amazing
Cole Williams! You can grab a t-shirt, tote bag, or tea towel featuring Cole’s artwork at our NEW Freeplay merch store! ✨
👕 https://freeplay.bigcartel.com

(Get a discount code when you grab a ticket 👀)

We’re super excited to announce that the Parallels ZONE, lovingly crafted by Jae Stuart & Cecile Richard, will be back again this year! 😊💖 Watch the Parallels ‘21 showcase in this lovely pixel-art rendition of our venue, The Capitol. ✨ ZONE URL will drop closer to the event!

A big shout-out to Dan Golding for the amazing trailer, as always 💖

Thank you to Creative Victoria for having us on board Melbourne International Games Week 2021.

Hi folks! If you tuned in to the Freeplay 2021 Festival or Awards night, please fill out this survey. It helps us out a lot! 🙏

Thank you for attending Freeplay 2021! We hope you had a delightful, inspiring, and engaging experience. Your feedback is important to us. We would love for you to fill in this form to help us make future Freeplay festivals even better. We use this information to report to our partners and help shap...

The Freeplay Parallels Showcase will be returning to Melbourne International Games Week (MIGW) for 2021! 🎉

The Freeplay 2021 Awards Ceremony is live in just ONE HOUR! 💖

This is shaping up to be a really fun ceremony, complete with a secret announcement at the end! 👀

Hello everyone! 📣 We have a new date for Street Tape Games! 👀✨

Due to the extended lockdown in Melbourne, the event is now rescheduled with the following date and sessions. There will be two facilitated play sessions to introduce the public to the games. Each session runs for 60-90 minutes.

Registration is free but essential, as spots are limited.

ℹ Please note that this event may be rescheduled based on weather conditions and latest COVID-19 restrictions in Melbourne. Registered participants will be notified before the event if there are any changes.

We hope you can still make it! 🙂

The 2021 Freeplay Award Nominations are out now! Congrats to all the nominees. 🎉

We'll see you online for the Awards Night on June 27th. 💖

The Freeplay Awards highlight and celebrate bold, personal, experimental, diverse, delightful, and culturally significant independent games being made in Australia and New Zealand.

We know you've been waiting patiently: we're super excited to announce that this year's Freeplay Awards nominees will be revealed Sunday after our closing keynote with Zedeck Siew.

Our other news is that the Freeplay Awards Ceremony will be postponed to 27th June. It's been a hard decision, but we're confident this means we can do justice to the incredible submissions we've received this year, and give our team some extra support during a challenging time, especially for those in Victoria.

We're very sorry, but we promise you won't be disappointed. We can't wait to celebrate some incredible games with you. ❤️

Freeplay 2021 has officially kicked off! You can watch all talks in the Freeplay ZONE!

Due to the latest lockdown, Freeplay will now be taking place entirely online. This means:

🟠 The Freeplay Awards will be streamed online on June 13.
🟠 The Night Market and Street Tape Games are indefinitely postponed for now and we hope to be able to bring it back later in the year

🎟 If you were a lovely person who bought a ticket to the awards, check your emails. We will be refunding tickets to all unless you reach out to us and specify otherwise.

🎵 We're waiting for confirmation from our partner events, Games Gig and Sound Byte, and will have more information for you later today or early tomorrow.

✨ The Freeplay ZONE will be back and will likely have a much larger presence than before. We’re still working out the details, but Freeplay has always been about the community, and the ZONE brings so much life to our festival.

That’s all for now. Honestly we’re all pretty disappointed that things have turned out the way they have. But the safety of everyone is our first and foremost priority. Look after yourselves friends, and we’ll see you online. ❤️

Let's meet our wonderful keynotes, shall we? ✨

D. Squinkifer, aka Squinky (they/them), is a transgender and neurodivergent new media artist who makes weird videogames about feelings while somehow continuing to survive in a late capitalist cyberpunk dystopia. They'll be opening the online conference on June 9th.

Our closing keynote is Zedeck Siew (he/him). Zedeck is a writer, translator and designer based in Port Dickson. His prose fiction and RPG work has been published in Malaysia, the UK, and the USA.

A reminder to reserve your FREE tickets to our online festival now: https://www.freeplay.net.au/2021-festival/2021-ticketing/

We have 40 speakers joining us online from around the world this year. A huge thank you to them for sharing their knowledge with us!

Freeplay is the world's longest-running independent games festival. Join over 40 speakers streaming live from across the world, tune in from the comfort of your home!

📣 The Freeplay 2021 conference schedule is live! 📣

We've got a huge 6 days planned, shaped by some absolutely excellent speakers. Join us from June 8th! 💖

The Freeplay 2021 Call for Volunteers is now open! 📣

This year we're looking for for some amazing people to help us run our physical events. You'll get a free pass to the event you work at and the awards ceremony. ❤️

Hello and thanks for your interest in volunteering for Freeplay 2021. This year, Freeplay is hosting a hybrid digital/physical festival. Our limited physical events will take place in Melbourne, Australia between the dates June 8–13. You are expected to volunteer approx. 3–6 hours in the physica...

We’re sorry for any confusion caused and wish them all the best! 🎟 Tickets for Freeplay are out now! 🎟

PLUS purchase your tickets for our amazing live events! Let's find out what they are, shall we? 👀

The Night Market makes its return! We’ve teamed up with Hovergarden once more to bring you a night of playful games & music. 🐸

Plus Voiceworks will be launching an upcoming issue and hosting a series of live readings for us all to enjoy! 📖

Last but not least, we can’t forget the Freeplay Awards Ceremony! 🎉

Hosted in-person (and streamed live around the world) we’ll be celebrating the incredible talent and voices this industry has to offer. 💖

Join us for a week of online talks and in-person events.

---
🎨 Our 2021 theme, "Soft Voices, Loud Roars", emphasises the importance of our collective power while acknowledging and valuing each individual's unique voice. We believe that with all our voices combined we can make for a loud roar!

We're accepting submissions for talks, panels & performances! We really want our theme to inspire & encourage first-time speakers to apply, so send us your ideas! No pitch is too small.

The Freeplay Awards have been a long-standing cornerstone the ANZ games community, celebrating new and emerging voices, creative talent, and bold experimental ideas.

---
This year's visual identity was made by Rory Sampson with guidance from our Visual Art Lead Goldie Bartlett.

"A cacophony of frogs singing together, each adding its unique song to the chorus, which is much larger than any individual."

---
🎥 All conference talks will be streamed live throughout the week and will be FREE! ✨

We’re also hosting a suite of in-person events. Here’s to seeing you all for live music, playful games, our Night Market, and the #Freeplay21 Awards, IRL in June!

More details, including events, tickets, and more next week! 💖👀

Be the first to know and let us send you an email when Freeplay Independent Games Festival posts news and promotions. Your email address will not be used for any other purpose, and you can unsubscribe at any time.

On Thursday October 25, the Freeplay Independent Games Festival will present Parallels 2018, the Independent Games Showcase as part of Melbourne International Games Week. Come and see some of the most unique, experimental, and personal games Australia has to offer. Tickets are over 60% sold and selling fast. Reserve your seats today! http://www.freeplay.net.au

Join us for 2017's Parallels showcase! On for one night only during Melbourne International Games Week, Thursday October 26th at 7pm! Tickets are on sale and selling fast. Reserve your seat today! www.freeplay.net.au

Come to PARALLELS 2015 on October 24 at 7.30pm, where Freeplay and ACMI will be presenting the best, weirdest, and most exciting Australian independent games at our Showcase event. Tickets are still on sale, but selling fast.

A fitting end for #Freeplay15 - our mascot Josephine sails off to unknown further adventures. Thanks to all who sailed with us in 2015, and we'll see you all again later this year for Parallels! 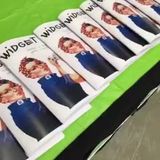 Come along to the Freeplay Fete, corner Grattan and Swanston streets today until 6pm!