That’s a wrap! #AllHail to every @subzerofestival Artist, Musician, Performer, Creative Indie, DJ, Stage Handlers, Photographers, Bartenders, Food & Drink providers & our 1000s of guests that came out ! YOU are the #SanJose we are proud of and love so much! 💓
#AllHail the Progenitors of Culture!

Thank you @tribalbaroque for the amazing performances tonight ! 💓

Our Utopia San Jose is the annual @SubZEROFestival First Friday & Saturday June 3rd & 4th. All the artists, indie creatives, performers and creative community we know and love coming out to share their work and amazing vibes in SoFA District. Come join us, celebrate the indie creative spirit and support a subculture economy!

#AllHail the Progenitors of Culture!

On view in galleryTWO this First Friday & Saturday is “I Am Back!” @Yoshi47 (Japan) solo exhibit during @ArtWalkSJ + @SubZEROFestival 5pm–11pm.

"San Jose is the place where I started becoming an artist, showed my works and did live-painting for the first time in this city. This series of my works are all combined old and the latest works together, so that people can at least see my path and process of being where I am now." ~Yoshi47

We will be open this First Friday & Saturday for @ArtWalkSJ + @SubZEROFestival with “The Illustrious Barron Storey”.

For our collectors not in the area, the show is up online at www.galleryAD.com

An incredible feast of Art, friends, books and crab with Yoshi47 before he went back home to Japan!

“I Am Back!” Yoshi47 solo exhibit is up through June 18th. Visit us during gallery hours: Thursdays. & *Fridays 12-7pm, Saturdays 12-5pm and *First Fridays 5-9pm. All ages and free admission.

Throwback to @Yoshi_47 (Japan) painting with us on a construction wall on N. 1st St. in downtown San Jose back in 2005 A.D.
Check out how far he's come with his solo exhibit "I Am Back!" here at @AnnoDominiGallery. We’re open this Thursday & Friday 12pm–7pm and Saturday 12pm–5pm.

Pictured artwork:
“TOKYO” by Yoshi47 currently on view in Yoshi’s current exhibit “I Am Back”.
Acrylic & resin on wood panel, 36” x 36”.
Please inquire for pricing.

🔴SOLD.
We are OPEN this Thursday–Friday 12pm–7pm & Saturday 12pm–5pm with “The Illustrious Barron Storey” solo exhibition.

If you can’t make it into the gallery, you can view available works online at www.galleryad.com

We’re excited to see you this evening for the opening reception of “I Am Back!” the return of @Yoshi_47 (Japan) to San Jose where his stellar art career began. Join us from 5-9pm @artwalksj and meet Yoshi and this incredible body of work.
#streetart #soloexhibition #japan #dtsj #california

Yoshi47's prophetic words painted on the back door of Anno Domini back in 2006 and still true today! Join us this Friday May 6th & meet Yoshi47 at the opening reception of his solo exhibition "I AM BACK!" by Yoshi47 (Japan) at Anno Domini 5pm–9pm @artwalksj .
#streetart #contemporaryart #japan #yoshi47

Looking forward to having you Jake!

#rp @jakewatling
Really happy to announce I’ll have a solo show at the legendary @annodominigallery this coming November. Stay tuned for more details to come.

As I Roll Through the Valley, acrylic on canvas, 2022

🔴SOLD.
"In Our Hands" by Barron Storey, mixed media on board, 20" x 15".
We are CLOSED for installation of Yoshi47’s exhibit in galleryTWO which opens on first Friday May 6th 5-9pm.. Barron I will still be on view in galleryONE thru June 18th and his available works are also online on our site www.galleryAD.com
See you soon!
.

It was so amazing to see artist Derek Weisberg (2008, 2011 Anno Domini) in SF last weekend! Derek has a new exhibit of ceramics and collage called “Fake Flowers” at Rena Bransten Gallery in SF. It’s on view through July 2nd…check it out!
Located at Minnesota Street Project
1275 Minnesota Street
San Francisco, CA 94107

Save the date…it’s an excellent show by the amazing Yoshi47 (Japan)!
#rp @yoshi_47
My solo exhibition at ANNO DOMINI] is just around the corner. I used to live in Bay Area, a college student, almost 20 years ago, and had a good relationship with ANNO DOMINI] for mural project and group exhibitions. Finally I am able to be back where I started my art career and have a solo show at the gallery I’m really fond of.

Upcoming Exhibit:
galleryTWO: “I AM BACK!: by Yoshi47 (Japan)
Opening reception: First Friday May 6th 5pm–9pm

Busy day in the gallery with Barron Storey fans coming through to see “The Illustrious Barron Storey” solo exhibit. We are open tonight til 7pm, and Saturday 12pm–5pm.

We appreciate so many @SJSU students for coming through to check out Barron’s historic work.

With “Death God Love” artworks by Mike Egan going to new homes down the block, across the nation and out of the country at the end of the show, this week is the last chance to see the exhibit in its intended form.

We are open today and Friday til 7pm & Saturday 12pm-5pm. Available artworks may also be viewed on our site www.galleryad.com

Although “Map to the Path” debut solo exhibit of French artist Céline Lyaudet has ended, her exhibit is up online and available artworks may be viewed and purchased from our site https://www.galleryad.com/art/archives/art/backroom/celine_lyaudet___map_to_the_path/ . You may also DM or email us for more information. It’s a body of work that reveals layers of depth depending on how far you want to sink into it. Enjoy!

We are open tonight til 7pm & tomorrow (Saturday 12pm–5pm) with “The Illustrious Barron Storey” on view in galleryONE. Stop by to see rarely shown commercial illustrations and 50+ personal journal pages by the legendary Barron Storey.

Only a few “Death God Love” paintings by Mike Egan still available, and only a few more days before the exhibit ends. Visit us during gallery hours Thursdays–Fridays 12pm–7pm & Saturdays 12pm–5pm through April 16th. Or view the exhibit online at www.galleryad.com

🎉 Happy Birthday Barron Storey! 🎉
We must not let this day pass without acknowledging love and appreciation for one of the greatest Artists of our time and certainly the most influential. In the pond of arts where everyone may toss in their pebble and make a ripple, Barron threw in a boulder and we have been riding on its wake ever since.

We love Barron and his work because it is Truth. It may not be pretty, or even pleasing at times, but in order for an artwork to have Beauty it must first contain TRUTH. Seeing Barron’s illustrations, paintings, personal journal pages and hearing his music reveals the tragic, the absurd, the questionable, the wins…. the grand Beauty of Life itself. Like all great seers, Barron removes the veil….how we perceive it is up to us, but there’s no doubt that we can not “unsee” what he has shown us. ~Anno Domini, April 6, 2022

We encourage you to visit Barron’s current exhibit: “The Illustrious Barron Storey” during his birthday month here at @AnnoDominiGallery.

Save the date!
Come meet @Yoshi_47 (Japan) and his work @annodominigallery on First Friday May 6th 5pm.

🔴SOLD.
Thank you Isaac and Natalie for your acquisition of this great piece by Mike Egan!

The gallery is open Thursdays–*Fridays 12pm–7pm and Saturdays 12pm–5pm. Exhibit artworks are also available on our site at www.galleryAD.com (link in bio).

An amazing evening of love, appreciation and awe of Barron’s work at the opening of “The Illustrious Barron Storey” last night. Thanks to all the family, friends and students for coming out and supporting this great artist and his work.

This survey includes selected commercial illustrations created over a 40 year span as well as personal drawings and paintings from Barron’s renowned journals.

“I Am Not a Bot”, “Can you prove it?” original paintings from Barron Storey’s journal #226. “The Illustrious Barron Storey” opens this Friday April 1st 5pm-9pm at @AnnoDominiGallery. Artist will be in attendance.

🔴SOLD. 🔴SOLD.
“Death God Love” Mike Egan solo exhibition is on view in galleryTWO for the First Friday @ArtWalkSJ on April 1st 5-9pm. Now is a good time to see these great works before they go off to their new homes at the end of the show in mid-April.

View the exhibit online at www.galleryAD.com

Barron Storey (born 1940, Dallas, TX) is an American illustrator, graphic novelist, and educator. He is famous for his accomplishments as an illustrator and fine artist, as well as for his 30+ year career as a teacher.

🔴SOLD.
Thank you Geoff….we know “The Love Cat” by Mike Egan will be a lovely memory of The Count for all time!

We are open tonight til 9pm (live music performance from 7-9pm) and tomorrow (Saturday) 12pm–5pm with “Death God Love” exhibition by Mike Egan. Come hang out!

#rp @mikeeganart
“We Were At Your Funeral” ⚰️ This is part of my “Death God Love” show currently up at @annodominigallery in San Jose, CA 🙌🏼 A lot of the paintings have found homes but there are still some really good ones left! Please check out the work, the link is on my profile 🙌🏼❤️💀

Be the first to know and let us send you an email when Anno Domini posts news and promotions. Your email address will not be used for any other purpose, and you can unsubscribe at any time.

Send a message to Anno Domini: 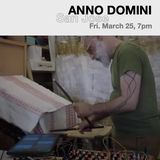 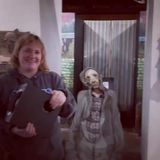 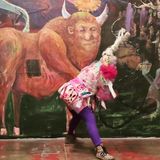 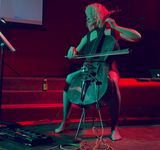 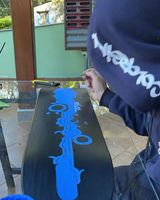 Just a girl with a guitar and her partner walked into the gallery to see the @Faring Purth painting up close. In walking & talking thru the MonkeyBird exhibit, it turns out that she is Mai.Khoi (“Vietnam’s Lady Gaga”) an activist and musician visiting SJ before she heads to an art residency in NYC to create a one woman modern opera. On top of that we learn she is the subject of a new documentary “Mai Khoi & the Dissidents”by Joe Piscatella that tells her story of pop star to activist to being banned from performing in her own country (available on netflix). Thank you for the beautiful song Khoi....it was a pleasure to meet you both and we look forward to seeing you again.

Much love and many thanks to Catch Prichard for the amazing performances throughout the night! Keep in touch with them as they'll have a new album coming out soon. 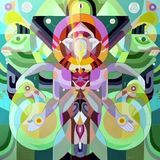 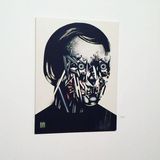 We are so excited to have the amazing and relentless spirit @futuretwinsf performing tonight along with @gemma_ray (UK)! Doors @ 7pm/ $5.

Bad Unkl Sista performing at Anno Domini for the opening of the Int'l Art of Zines Show & Sale Oct. 7, 2016

Thank you for being here tonight for Cellista' & the Juxtapositons Chamber Ensemble performance with artist Barron Storey. #TheEndOfTime

Other Art Galleries in San Jose

The Full Y2K19 Anno Domini​ #y2kloopfest #LiveLooping Wed event playlist is now posted: https://www.youtube.com/playlist?list=PLCvVUz8aWquv6eoSMWt5TuUD3PJJxlTM8 If you care to donate or help promote our fundraiser, use this link: https://www.facebook.com/donate/465979537599003/