Photo by featured today on

I’ve been drawing these striped, alien people & its been a lot of fun. I might make some paintings of these guys but I don’t know yet. We’ll see 🤷🏻‍♀️

“An Album I was Going to Release in 2019,” will be available on all streaming platforms March 1st. This album is 11 songs written about some of my experiences before the pandemic. I didn’t release before for obvious reasons.

Hey all! Just pinning this post to let you know that I don't really use this page right now. If you want to see real updates of my work follow any of these links. Thanks!

Linktree. Make your link do more.

Here’s a time lapse painting from a few months ago 🤔 its part of a series of 6 large canvas paintings I did about identity & how we perceive ourselves.

I’m Streaming live as part of Coping with Dystopia ( https://www.facebook.com/copingwithdystopia), live stream fest for charity ! Please visit the YouTube Channel at:
https://www.youtube.com/channel/UCY-2_zy944Shxk0--1f5tqQ to watch the full stream including the artists performing after me. Donations are being collected for the Olympia Rent Strike & Mutual Aid Partners https://olyassembly.org/rentstrike/ and can be sent to paypal.me/coping . Next up is: The Window Smashing Job Creators!

Some portraits from yesterday: )

Work in progress i think!

Hey folks. I have fixed my camera that was previously broken. This means I can now make video content that is of slightly better quality than you have come to expect from me. Goodbye we**am. Okay, thanks.

In this video I talk about value, contrast, and other painting techniques. Also I trash talk 'old masters' techniques' becuase I don't think those even exist.

Very excited to be making a video for this song! Ah!

I made some weird stuff last night! All photographs taken this year & last, printed, & restructured with dry pastels 🤔 idk!

Hey I discussed art & music on a really cool podcast! Check is out!

Brian Huntress discusses recovery from addiction, contemporary television, and the importance of art history as a means of understanding the emotional evolution of expression.

New work! Very interested in preserving my past ideas & aesthetics while lifting compositions from traditional pieces in a more intentional way. Y’know?

Expanding an older series. Trying to give strength to the abstraction by including representational elements. Yeah.

Its been a journey since the Tarot deck was finished & I’m happy to say that out of the 150 or so printed there are now only 5 left !!!

If you wanted one & didn’t get one before, this is actually your last chance as I won’t be printing these again for the foreseeable future. I have plans to make another deck in a new style but the details are still up in the air.

I’m selling these last ones for $40 /e or best offer. Hope all is well, everyone. Thanks so much.

Three new pieces from the past couple days. I am very prone to over blend, over paint, or blow simple compositions out of proportion. Making things intentionally loose or abstracted but still representative feels really good. I will continue down this path until some other weird thing starts to interest me.

I just wanted to say too that I am SO thankful for everyone I met on tour in April. You are all amazing and beautiful people and all of the generosity and support meant the world to me. Thank you all.

Be the first to know and let us send you an email when Brian Huntress posts news and promotions. Your email address will not be used for any other purpose, and you can unsubscribe at any time.

Send a message to Brian Huntress: 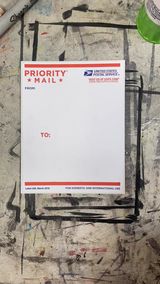 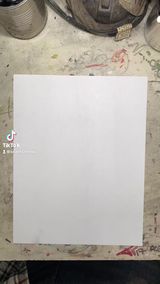 Talking about using tape in my art & how I got the idea from German expressionist Frank Auerbach (b. 1931)

Here’s a time lapse painting from a few months ago 🤔 its part of a series of 6 large canvas paintings I did about identity & how we perceive ourselves. Mixed Media on Canvas, 56x73” 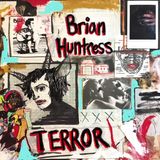 A Vlog for the Dogs 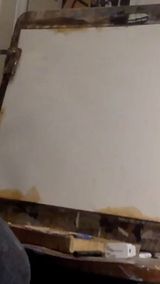 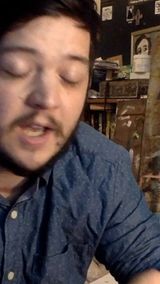 Kickstarter for the Tarot Deck!

Welcome to my page.

I don’t know what this is going to look like on people’s feeds but its a new feature I guess so why not? Here’s a some introductory words about me if you’re not familiar.

I am an artist above anything else. Maybe I write, make music, perform, or sculpt but the most convenient way to say all of that quickly is with the former. One of the main things that drive me is a fear I’ve had for a long time and that is not knowing. A fear of not knowing. Or more accurately, fear of inadequacy or being second best. I don’t act competitive with the things that I do or towards the people in my life but part of this narrative I have created for myself contains an internal monologue that tells me everyday that I don’t know enough and I have to keep going. I think one of the strongest qualities an artist can have is an unending expertise in anything besides art. In short, an artist has to know things about stuff. Its as simple as that. This drives me to learn new mediums, techniques, stories, histories, and ideas. I’m not saying I am super smart or better than and I don’t ever want to be. I just need to know. Today and for the last few I have been learning animation. I have a humble background in stop motion animation and that experience is helping me a lot. I was recently given a Huion drawing tablet and I’m using a program called Autodesk. It has this flip book feature that allows me to mock up quick animations. My focus right now is movement and space. I don’t know how to describe it yet but I’m trying to make the shorts look fluid and continuous. Maybe kind of how music moves. I’ve also been recording time lapse videos of the digital drawings I’ve been making. They are anywhere from 25-60 minutes raw but boil down to about 4-6 minutes finished. I dub a stream of consciousness-like voice over and pit it with music. It gives me the same feeling podcasting did just this stuff is a little more produced. Not necessarily in quality but more in composition. These have allowed me to combine three of my favorite formats into one piece. They are a drawing, a video, and speaking. Those put into one make something that I would probably watch if I found it online. Regardless, its been a productive project and its been fun. Besides all that, I am working, I am writing, and I am breathing. What a life.

Other Art Galleries in Rockland

Other Art Galleries in Rockland (show all)