GOBBLE UP THESE THANKSGIVING DEALS!!!

WINNER WINNER,, TRY YOUR LUCK AND BE A WINNER, CONGRATULATION TO UR WINNERS

READY FOR THIS? HOP TO HUKOOS.

GOBBLE UP THESE THANKSGIVING DEALS!!!

GET YOUR 10%OFF CALL NOW

we know you deserved to have fun when you doing great at school..

today after school see you at hukoos family fun.... TODAY IS THE DAY,. HUKKOS FAMILY FUN IS YOUR SPOT..

EVERY TUESDAY YOU SHOULD BE HERE WE US , NO EXCUSES HALF PRICE ON EVERYTHING ... ILL SE YOU HERE ALL TUESDAY.. GO HUKOOS 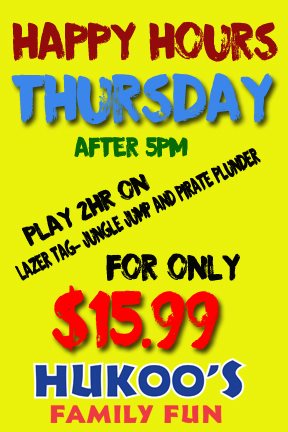 hey you still on time for today happy our of fun, today and every thursday after 5pm.. hop hop to hukoos family fun..

EVERY TUESDAY YOU SHOULD BE HERE WE US , NO EXCUSES HALF PRICE ON EVERYTHING ... ILL SE YOU HERE ALL TUESDAY.. GO HUKOOS

ALL FRIDAYS ARE EPIC , MAKE EVERY FRIDAY YOUR FAVORITE DAY AT HUKOOS FAMILY FUN !!! CHECK THIS OUT !!!!

THIS SATURDAY JULY 13 , WE ARE EXCITED TO SEE YOU AND YOUR FAMILY ENJOIN US ON THIS DAY ,,GIVE AWAY, MUSIC, WIN PRIZES ETC..
THIS SATURDAY 13 WE WANT TO SEE ALL OF YOU.. THANK YOU FOR BEEN PAR OF US YAYYYY TEAM HUKOOS

Be the first to know and let us send you an email when Hukoo's Family Fun posts news and promotions. Your email address will not be used for any other purpose, and you can unsubscribe at any time.

Other Arcades in Orlando

Tonight's Fliptivity Hukoo's Family Fun http://ow.ly/6iNB50BNdK9
Today's Fliptivity Hukoo's Family Fun http://ow.ly/Wjxu50xCi3N
Laser Tag this weekend? Super fun for girls, boys, and a range of ages. Play at Hukoo's Family Fun, Main Event, Andretti Indoor Karting & Games Orlando & More! https://fun4orlandokids.com/Fun-Around-Town/Laser-Tag-and-Paintball/
Sharon Felton Antoinette Marie Fowler Tweedy Felton this is where Jaidyn wants to go for his birthday
I was an employee here. I quit this weekend. I loved working with the kids. And had some good co- workers. However, my manager was very impossible to work with. She inappropriately discussed what she felt was wrong with what you do. For example I finished a party and because someone forgot to activate game cards she decided to reprimand me in front of guests. She constantly blamed others for mistakes and yelled at them. She was very disrespectful in how she discussed anything with employees. She often called guests too fat or large for attractions. Many times the parents of the parties I was hosting complained about how she spoke to them or how rude she was. In another situation there was a child who bled from their nose and because the attraction host pulled all the children from the attraction (like one should) she yelled at the host and told her to wipe up the blood and put the remaining children back on. Something of that nature should be cleaned thoroughly. She also charges guests without notifying them. On numerous occasions she had me tell guests that I should "add pizza to their order" and for me to include soda without telling them because "they'll want to drink something." Many times this became an argument between her and I because I believed every parent should be informed of any extra charges to their order. I also got reprimanded many times for her trying to add on items to the order and parents requesting to remove them. I was most struck by the money removed from my tips. She had a percentage taken out of a host's tips called the pool. The pool was apparently for everyone involved in aiding the host with the party. This reaccuring fee was taken out even when I or any other hosts managed the party entirely alone. My last straw was my last party on Saturday, March 3, 2015. My tip was a little over 70$. The percentage of money taken for the pool was more than what I received. I received a little over 21$ and some change from that tip. She removed the rest of it for admin fee and "the pool". I was tired of all these things she does and was fed up with arguments with her and I. I am not the only employee that knows this and much more unexplainable, and unsanitary instances have occurred because of her decisions. Please don't spend any money here because you are not paying for anything worth your child or children's health risks.
Tonight's Fliptivity Hukoo's Family Fun http://ow.ly/wGgE30fwJpe
Are you open this weekend? I've called and emailed in regards to my daughters bday party. Please let me know ASAP!!
Hello! I’m presenting the company which developed innovation Phygital (physical + digital) parks for kids. We’ve already opened several. It’s interesting to know your comments about it. You can look what it is by this link: https://vimeo.com/helloio we have many formats. And please, let us know – would you like to have such park (zone) in your city, state? Thanks for attention. We are open for partnerships all arround the world! And we are truly believing that our parks is a future for education, entertainment and stimulating curiosity in our kids.
Every field trip should be a Hukoo's Family Fun field trip!!
This place seriously looks like a BLAST!! We've got some very happy Rookies today! Hukoo's Family Fun thanks for such a happy field trip!
Hukoo's Family Fun we had so much fun today! Thanks for letting us come and play!❤️