The Art For Faith's Sake concert series is a ministry of Prince of Peace Lutheran Church in Largo, FL. Join us for these free events throughout the year!

The 2022 Three Organ Spectacular! is in the books! Thank you to all who attended yesterday's concert!

This year's Three Organ Spectacular! comes with a bonus! Special guest Peter Kinzie will be performing an improvisation in orchestral theater organ style. We look forward to seeing you this Sunday at 3pm!

PETER KINZIE was born at the end of World War II in what was East Germany, and was evacuated to an orphanage near Dachau. Remembering the Berlin Airlift, Peter watched as small packages fell from the sky. Like “manna from heaven,” Hershey Chocolate landed on the ground. Moving to Lake Wales, Peter became part of his new adopted family - Dr. and Mrs. Kinzie. All this began in 1952, with naturalization coming in 1956. Speaking only Ger- man, Peter made discoveries by looking and touching. He happened upon a strange “black and white toothed beast” in his new home. Climbing onto the bench of an upright piano and touching the keys, he was captured by the sound and thus began a musical adventure. Peter is the Florida dealer for Prestige and Unico Organs, which are built in Italy by Viscount International. Sales and service take Peter throughout much of the US and the Caribbean. In his travels, Peter plays organ programs, presents workshops, and consults on organ building projects. Peter owns and operates his own company -- Church Organ Concepts.

Our third featured performer in this year's Three Organ Spectacular!! is Shawn Thomas. Join us for the concert next Sunday, Feb. 20 at 3pm at Prince of Peace Lutheran Church.

SHAWN THOMAS serves as Parish Musician at Prince of Peace Lutheran Church, an ELCA congregation in Largo, FL. At Prince of Peace, Shawn oversees a music ministry comprised of the parish adult, children's, and handbell choirs, and is the Artistic Director for the Art For Faith’s Sake concert series. He currently serves as Dean of the Clearwater Chapter of the American Guild of Organists. Shawn holds the Doctor of Musical Arts degree from the University of Kansas and his graduate and undergraduate work was completed at The University of Florida and The University of West Florida, respectively. His past teachers include Drs. Michael Bauer, Laura Ellis, James Higdon, Lynne Lauderdale, and Kevin Vogt. Shawn has performed in masterclasses with renowned French organists Michel Bouvard, Vincent Dubois, Daniel Roth, and Olivier Latry, and American organists Marie Rubis Bauer, Marilyn Keiser, and Tom Trenney. Shawn is married to Michelle, the Cathedral Administrator & Associate for Christian Formation at the Cathedral Church of St. Peter (Episcopal) in St. Petersburg, FL. 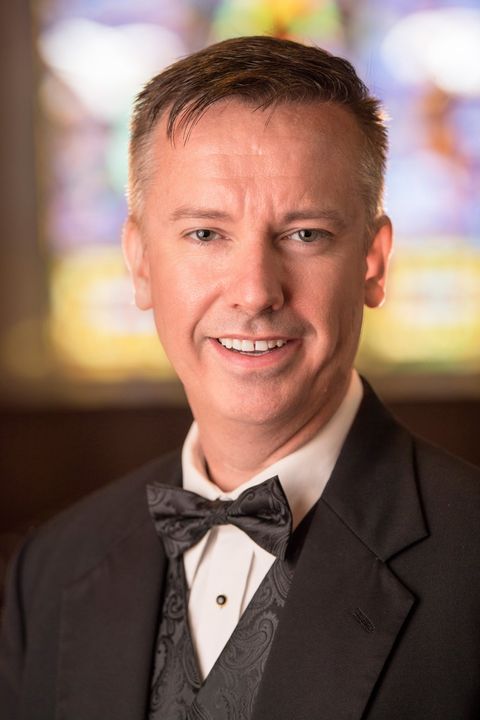 Our second featured performer in this year's Three Organ Spectacular! is John Lowe. Join us for the concert next Sunday, Feb. 20 at 3pm at Prince of Peace Lutheran Church!

JOHN T. LOWE, JR. is a native of Lynchburg, Virginia. He received the Bachelor of Science degree in Organ Performance from Liberty University in 1993, the double Master of Music degree in Organ Performance and Choral Conducting from the University of Alabama in 1996, and the Doctor of Music degree in Organ Performance and Church Music from Indiana University, Bloomington in 2005, His teachers include David Charles Campbell, George B. Clark, the late J. Warren Hutton, Larry Smith, and Christopher Young in organ, and Sandra Willetts in conducting. In September 2007, he assumed the duties of Director of Music and Organist at Gainesville, Florida’s Holy Trinity Episcopal Church, where he oversees the music program for the 1,125-member congregation, and plays the three-manual, forty-nine rank Visser-Rowland organ in liturgies and concerts. He is also past Dean and Sub-Dean of the Gainesville Chapter of the American Guild of Organists, serving as Director of the chapter’s first Pipe Organ Encounter for young organists in summer 2012.

Over the next three days, we will highlight each of the performers in this year's Three Organ Spectacular!. Join us for the concert next Sunday, Feb. 20 at 3pm at Prince of Peace Lutheran Church.

SETH BOTT is a native of Castle Dale, Utah. In May 2020, he received the Doctor of Musical Arts degree in organ performance from the University of Kansas, where he studied with James Higdon and Michael Bauer. He was appointed a graduate teaching assistantship, where he taught private lessons and worked closely with the organ faculty to organize and execute organ department business. Before attending the University of Kansas, he received his Master of Music and Bachelor of Music degrees in organ performance and pedagogy from Brigham Young University, where he studied with Don Cook and Douglas Bush. Seth is an active recitalist and performs many recitals around the United States every year. He served for many years as a Guest Tabernacle Organist on Temple Square and participated in the daily recital series, performing on the world-famous Mormon Tabernacle Organ. Seth has had an abundance of church music roles in various denominations, and is currently serving as Director of Music and Organist at St. James Episcopal Church in Midvale, Utah. In addition, Seth works in the School of Music at the University of Utah as a collaborative pianist, and has a large—and ever-growing—organ studio of around 25 students. In 2009, he took first place in region IX of the RCYO AGO Competition for Young Organists, allowing him to perform at the National AGO Convention in Washington, D.C. in 2010. As a natural teacher with much background, Seth loves to share his passion for music and the organ with others. #pipeorgan #pinellasarts #CreativePinellas #classicalmusic #elca #lds #utah #lutheran

Enjoy this flashback to the February 2020 Three Organ Spectacular!

The trio of organists return Sunday, February 20, 2022 at 3pm. Join us for this free concert as part of the Art For Faith's Sake concert series.

Out of precaution, the Astralis Ensemble concert originally scheduled for January 16 is postponed. We are looking forward to welcoming this dynamic ensemble to Prince of Peace later this year.

Enjoy this throwback from the "Three Organ Spectacular!": The Stars and Stripes Forever.

Enjoy this flashback to the Three Organ Spectacular concert held at Prince of Peace Lutheran Church on February 16, 2020. Here is the famous Toccata and Fugue in D Minor by J.S. Bach, Featuring organists Seth Bott, John Lowe, and Shawn Thomas.

Featuring organists Seth Bott (Provo, UT), John Lowe (Gainesville, FL), and Shawn Thomas (Largo, FL), we round out the weekend with a concert for three organs, choir, and handbells. Features the Prince of Peace Festival Choir performing Louis Vierne's Mass for Choir and Two Organs and other selections for one, two, and three organs including:
Toccata and Fugue in d minor (J.S. Bach)
Praise the Lord with Drums and Cymbals (S. Karg-Elert)
Organ Concerto in F- The Cuckoo and Nightingale (G.F. Handel)
The Stars and Stripes Forever (J.P. Sousa)
Toccata in Seven (John Rutter)
Battle Hymn of the Republic (Wilhousky)

Fandango! will perform "Balkan Suite" by Miroslav Tadic. This music brings together a mixture of multiple styles, including Turkish, Albanian, and Roma (“Gypsy”) music as well as other ethnic idioms such as Macedonian folksong and dances.

Click the video below for a preview of this weekend's concert. See you Sunday at 3pm!

Fandango! Will perform a FREE concert on January 26 in Largo, FL. Here's a video of this GRAMMY nominated quartet performing Dansa Espagnola by Manuel De Falla.

A wonderful night of scripture, song, and Santa Lucia!

Tickets for Advent Festival of Lessons and Carols are available for pickup in the church office today! The office is closed Thursday and Friday for Thanksgiving, but reopens Monday. Call for more info. 727-585-9969

DID YOU KNOW?
The organ at Prince of Peace has over 2,500 pipes made up of various woods and metals. There are three opportunities to hear the glorious sound of the organ in worship or concert this Sunday 8:45am, 11:00am, or 3:00pm.

DID YOU KNOW?
The Austin pipe organ at Prince of Peace was designed by Richard Purvis (1913-1994), the renowned organist-choirmaster at San Francisco’s Grace Cathedral. Purvis's long and distinguished career was marked by elegant service playing, conducting, and composition. He was admired as one of the finest organ improvisateurs in the U.S.

The pipe organ at Prince of Peace Lutheran Church was built in 1946 by the Connecticut-based Austin Organ Company. It was originally installed in the First United Methodist Church of Stockton California. In 2003, it was relocated to Prince of Peace and enlarged.

Be the first to know and let us send you an email when Art For Faith's Sake posts news and promotions. Your email address will not be used for any other purpose, and you can unsubscribe at any time.

Send a message to Art For Faith's Sake:

Other Arts & Entertainment in Largo

THREE-ORGAN SPECTACULAR THIS SUNDAY! SUN FEB 16 / 3PM Festival choir performing Louis Vierne’s Messe Solennelle for choir and two organs, along with other music for three organs. Featuring Seth Bott, John T. Lowe, Jr., and our own Shawn Thomas, as organists. And, the Prince of Peace Festival Choir and Handbell Choir! It's going to be amazing!! Bring a friend and stay for the reception following the concert. Art For Faith's Sake
SUN JAN 26 / 3PM / FREE PERFORMANCE! ART FOR FAITH’S SAKE presents FANDANGO! One of the most exciting new groups on Chicago’s musical scene. FANDANGO! is a toe-tappingly spicy mix of Latin, Spanish, Sephardic, Balkan, and classical sounds founded by four multi-award-winning, globe-trotting virtuosi who hail from Spain, the USA, former Yugoslavia, and the UK, and who have played, separately and together, on the world’s most prestigious stages. Invite friends too! Art For Faith's Sake