How do you know our signed pieces are authentic? check this out.

Good morning! for today we want to share a little BTS of our process, enjoy!

Good morning! for today we want to share a little BTS of our process, enjoy!

We are ready!!! visit us at Barrett Jackson's, West Palm Beach from April 11 to 13th!

Season's greetings from the very merry team at Millionaire Gallery. Wishing you all the joys of the season and happiness throughout the coming year. ...

Firing up the beautiful 1950 Harley Davidson Panhead!!!!
An amazing sight and sound for all the Gasheads On here!!!
The extremely talented Harley expert ‘Zach the Maniac’ working his magic and getting the old girl purring!!!

Have you visited us lately? With new amazing pieces from different eras, you can enjoy a relaxing yet exciting time during your stay in Key West, Florida.

Next time you're in Key West, Come on in!!

Come check out this 1950 Harley Davidson Panhead inside our Gallery in Key West! It's for sale! One name, one of the greatest names in horse racing history. The winner of the 1973 Triple Crown Championship. An athlete beyond compare, at the peak of his glory. One of only 12 horses to run to glory in nearly 100 years of racing.

A rare and amazing accomplishment for an athlete who was truly one in a million. A racing legend who won the Belmont by a staggering 31 lengths and set the track record. That 1973 Triple Crown Championship race is regarded as one of the most amazing races ever.

Second only to Man O’War in the top 100 Racehorses of the 20th Century, Big Red won five Eclipse Awards, an unprecedented Horse of the Year as a two year old, and then again as a three year old. Elected to the National Museum of Racing and Hall of Fame in 1974, he set speed records in each leg of the Triple Crown Championship the year before. His record-breaking time for the Derby still stands at Churchill Downs for 1 ¼ miles, and his winning time for the Belmont holds the American record for 1 ½ miles on the dirt.

An Australian trainer is quoted as saying of this Icon of the horse world, “He is incredible, an absolutely perfect horse. I never saw anything like him.”

This perfect horse, and the jockey who worked with him to reach the pinnacle of racing success, Ron Turcotte, are forever immortalized in black and white in an original track photograph of their crushing defeat of the field at Belmont in 1973. The pair of victors is shown triumphantly winning the final leg of the Triple Crown Championship and earning a place in history.

The photograph give one chills, as the “competition” is so far behind, it is as though Secretariat and Turcotte are on the track nearly alone. Standing in front of this photograph is being in the presence of greatness, true greatness.

Secretariat is gone, yet, it is still possible to own a piece of this remarkable history. For your enjoyment, the original track photograph, in black and white, signed by Triple Crown Championship and Hall of Fame jockey, Ron Turcotte, tastefully framed, and mounted with a descriptive plaque and an original riding crop. Witnessed, Examined and Certified Authentic.

Congratulations to Justify! We have another Triple Crown Champion!!
http://www.sportingnews.com/other-sports/news/who-won-belmont-stakes-2018-results-winner-triple-crown-horses-odds-post-time-pimlico-race-course/1gac7sytwb2061cspaj2xzz6a4

Follow along live as Sporting News provides live updates from the 2018 Belmont Stakes.

Two for $300 Secretariat Sale to celebrate this weekend's Belmont Stakes! 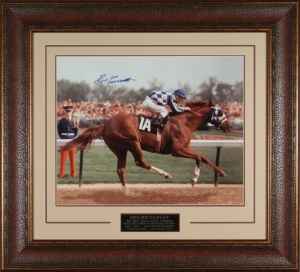 Millionaire Gallery Key West will be closed temporarily until Key West is fully restored, however our corporate office in Miami remains open and processing all pending orders. If you have questions in regard to Adam Scott Rote, Gabe Leonard, Joe Petruccio, Doug Bloodworth, Michael Romero, Patrick Guyton or Scott Jacobs artwork, please contact via Facebook, email at [email protected], or call me directly at 305.900.0077.

Thank you for all of your help and support throughout the years.
- James Way
Gallery Director
Millionaire Gallery Fine Art, Key West

For those of you who found yourselves in the path of Irma or Harvey, we hope you and your loved ones are safe.

Our Millionaire Gallery / Rock Lives On offices, while still without power, have made it through Irma relatively and fortunately unscathed.

As soon as we are able to resume our Miami operations, all Pending orders will be in the works and out the door. Please bare with us.

We look forward to seeing many of you back in one of our three Key West galleries soon!

In the meantime we are available at www.MillionaireGallery.com

All three Key West galleries are ready for Irma. Hope everyone in Florida is safe! We will see you soon! The official artist for Graceland, Joe Petruccio! Last day to meet this Legendary artist. What's more American than the king of Rock and Roll? Happy 4th of July!

Painting in the gallery! Joe Petruccio! Stop in and meet him today! Till 10pm!

Nothing cooler than watching Joe Petruccio in action 😎 Catch his 40th Anniversary commerative piece before it heads to Graceland! Only at #MillionaireGallery!! 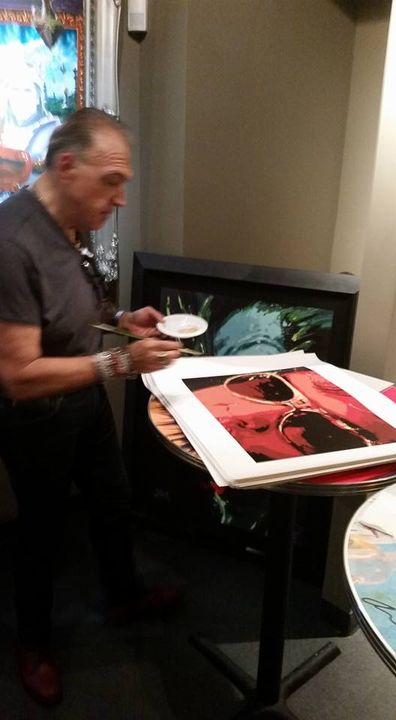 Joe Petruccio in the gallery! Make sure you stop by and meet him!

Guess who's coming to #KeyWest this 4th of July?!? 😲😍✨ #joepetruccio #dccomics #lucasfilms #MillionaireGallery 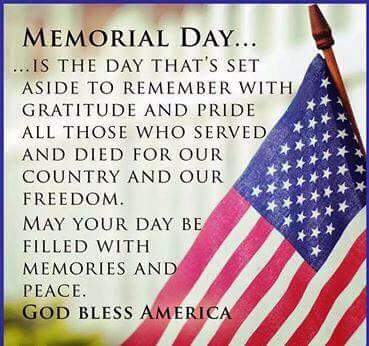 Happy Memorial day! Be sure to thank a veteran!

Be the first to know and let us send you an email when Millionaire Gallery Fine Art, Key West posts news and promotions. Your email address will not be used for any other purpose, and you can unsubscribe at any time.

Other Art Galleries in Key West