We have an open mike, member showcases and concerts. To become a member, contact club member Dave Hurd.

March 15 Showcase – Dan Telfer & Friends
(by Dan Telfer)
My first showcase was January 11, 2011, exactly eleven years before this one. A blizzard hit that afternoon, but Sol Creech and I played our hearts out to a 3/4 full room of hearty souls at the Tortilla Factory.
The Folk Club has changed my life for the better. A lyric of mine from “Christmas 2047” (and coincidentally on my license plate) says that “health and laughter and love and song are my God’s greatest gift to me.” The Folk Club has contributed and amplified the laughter, the love, and the song in my life.
How? The FC got me up and playing in front of people. It got me writing my own songs and performing them. It got me playing autoharp (thanks Todd Crowley) and harmonica. It taught me *not* to play the banjo. The FC allowed me to play with numerous other artists with their varied instruments. It gave me the opportunity to bring some of my grandkids to the FC and have them get up to sing and perform.
I’m a member since about 2005. So, 16 years with approximate attendance 30 times per year, or about 500 times at the FC. The round trip of 50 miles to and from home in Springfield translates to 25,000
miles on the Parkway. Yikes!
Pictured are 7 of 14 of Evie and my grandkids who also contribute to the laughter, the love, and the song of my life - some of whom have performed at the Folk Club of Reston-Herndon. Please sing along!

Special Announcement – Live Open Mics Resume! Beginning March 1, 2022!
Based on recent positive trends of the coronavirus, we feel it is safe for us to gather at the Amphora every Tuesday night, and follow the CDC’s guidance (last updated Feb 25th). For now: 1) We expect only fully vaccinated people to attend, 2) We request that everyone wear a face mask when not eating, drinking, or performing, and 3) We request that anyone with any coronavirus symptoms stay home. As before, we will be unplugged (no sound system) unless it’s a showcase or concert night. We realize that some people are not yet ready to return to a live music situation. To provide a music-sharing opportunity for those who are unable or not yet willing to come to the Amphora Al Hobson will resume hosting an open mic on Zoom every other Monday night, starting March 7th (then March 21st, April 4th). Send an email to Al if you are interested ([email protected]) in performing or listening.

The Folk Club of Reston-Herndon updated their website address.

The Folk Club of Reston-Herndon updated their website address.

Due to the Omicron surge of COVID-19 we have decided to suspend our live Tuesday night open mics until further notice. This new variant of the coronavirus is much more transmissible and even those who are fully vaccinated, boosted, and masked (like those who recently attended Tuesday night at the Amphora) can get it and potentially pass it on to others.
That being the case, we are taking this precaution to help keep everyone healthy and to minimize the spread of the virus. We feel it is better to be cautious than to later have regrets because any of our members or friends have covid-related health issues.
So we will take a step back and see how the surge impacts things. We would like to see it settle down before going back to the Amphora, but we have no idea when that will be.
This is not easy and we don't like doing it, but we feel this is necessary based on what the health experts are telling us.
- Ben Hamblin and Al Hobson
- President and Treasurer, Folk Club of Reston/Herndon

December 21, 2021 -- Holiday Party
On Tuesday, December 21st we’ll have our annual holiday party - round robin format (one song per performer or group, but we may go around again if there's time) - free dessert - and no $1 donation needed. Gift wrap your gently used CDs (for the raffle), don your holiday attire such as ugly sweaters and stocking caps, and come to the Amphora to join all of your friends for the holiday merriment. FYI, we request that everyone wears a mask except when eating or performing, and we ask that only those who are fully vaccinated attend. Also, the sound system will be set up. Mrs. Claus (Connee Chandler) will be there and she hopes that you will be, too.

This Tuesday, Dec 14th, a chance to hear traditional Appalachian music played by this award-winning couple. Tickets available at the Amphora (for the vaccinated who agree to wear a mask except when dining).

Due to illness, Jennifer has to cancel the showcase tonight. Jim Thorne has stepped up and will fill in for her.

Vax and Mask up, please!

Joe Newberry is coming to The Folk Club….Sept 21st Concert!

Joe Newberry (with Rich Dworsky and the band) performs Carl Jones' "Last Time on the Road" during our June 18, 2016 broadcastWebsite: http://joenewberry.me/h...

June 8, 2021 – Folk Club Family Reunion!
Finally, we’ll have our first meeting in our home since March 10, 2020, 15 months ago. The banquet room at The Amphora Restaurant and Diner Deluxe in Herndon, VA opens at 6, and the open mike starts at 7:15 PM EDT and ends around 9:45 PM. It feels like this will be a soft opening for us, it’s been so long since we were there. And there will not be any Zoom or YouTube; ya gotta be there. It will be marvelous to see our fully-vaccinated friends in the flesh, and to hear music conjured right in front of us. To allow more people to play we’re going to try changing the length of the performance slots to 8 minutes, with 7 slots before the break and 7 after. And we ask that performers don’t share slots with others - if all slots are filled musicians can add their names to the wish list and we’ll try to fit them in.

I've been an artist for many years, but am just getting serious about photography. My photos have been juried into shows at the Art League Gallery in Alexandria, VA. I love to snap and see what happens. I especially like animals, nature, and landscapes.

We are having a Showcase on January 19th!
Look for the youtube link in an email from President Ben Hamblin each week, or go to RestonHerndonFolkClub.com/calendar.html

Guitar International magazine is pleased to announce the live-streaming of the second Blue Melody Outdoor Sessions’ performance in Reston, Virginia, featuring multi-instrumentalist, Jillian Matundan, who was the recipient of two 2019 Songwriters’ Association of Washington (S.A.W.) awards.

This one's for you, Dave Hurd.

August Newsletter is now posted to our website:
http://www.restonherndonfolkclub.com/Newsletter%20Archives%20Index.html

Dave Hurd, our longtime friend, treasurer, mentor, historian, conscience, mentor, leader, and gentleman left us on July 2nd. We are bereft and will miss him greatly.
He was so instrumental in making sure that things were done right, and that we provided a good environment to hear folk music, had concerts with professional musicians, and supported music in the local community.
It just won't be the same without him. He did so much for us. But if we keep true to his spirit The Folk Club of Reston-Herndon will be around for many years.

A tribute to Dave can be found at the following link:

July Newsletter is now posted to our website:
http://www.restonherndonfolkclub.com/Newsletter%20Archives%20Index.html

May Newsletter is now posted on our website.
http://restonherndonfolkclub.com/Newsletter%20Archives%20Index.html

How to set up Original Sound settings for iPad, iPhone, and Android mobile devices

For musicians who need to have the best sound quality while using the Zoom app for online music lessons, they've been restricted to using laptops and desktop...

This video shows the setting to change in Zoom if you are trying to sing and play instruments or teach music lessons via Zoom Video Conferencing.

Sadly, we are forced to cancel our Tuesday Folk Club open mics until further notice. We must follow the guidance of government authorities and practice physical distancing, until restaurants are able to reopen and groups of people can socialize again. This is a difficult time, but we all must do what is right to minimize the impact of the novel coronavirus on mankind (and it’s sobering to put it that way).
An essential need for the Folk Club is sharing our love of music, and we feel disoriented that we are not able to do that in the company of our friends at the Amphora every week. Therefore, until the human world is on an even keel again, the Folk Club plans to hold a virtual open mic every Tuesday night from 7:30 to 10:00 PM ET.
To stream our online open mic on YouTube Live, go to our calendar page, click the Virtual Open Mic entry in the Calendar of Events, and then click on the YouTube link.
We all look forward to the day when we can meet together again at the Amphora Diner Deluxe in Herndon on Tuesday nights. What a celebration that will be!

Due to the COVID-19 pandemic, the Brooks Williams Concert will have to be rescheduled.

Meets Tuesday nights, 7:15 p.m. at The Amphora Diner Deluxe, 1151 Elden Street, Herndon, Virginia. The Folk Club is a nonprofit, an all-volunteer organization led by an elected Board of Directors. Membership in the Folk Club is open to all. Contact club member Dave Hurd about becoming a member.

Be the first to know and let us send you an email when The Folk Club of Reston-Herndon posts news and promotions. Your email address will not be used for any other purpose, and you can unsubscribe at any time.

Send a message to The Folk Club of Reston-Herndon: 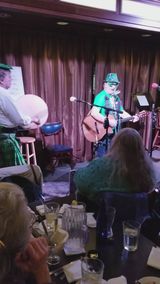 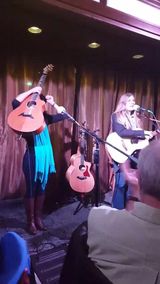 Other Live Music Venues in Herndon

🎼We look forward to performing for The Folk Club of Reston-Herndon on April 19th at Amphora's, 1151 Elden Street, Herndon VA, and we'd love to see you there! (More details at https://folkclubofrestonherndon.org/?page_id=1379)
I have 2 Charlie King albums, happy to gift to someone! 1) "My heart keeps sneakin' up on my head, with Dave and Kay Gordon 2) "Steppin Out," with Martha Leader
Anyone thinking of recording? Digital or analog in NoVa. Cheers! https://www.facebook.com/groups/1480080092223632/permalink/3118333208398304/
This Tuesday, come to the trad concert by Erynn and Carl. Award-winning fiddle and fingerstyle guitar! Songs from the heart and the hills of Appalachia. Tickets available at the Amphora.
Showcase Change - The Folk Club's Dec 7th member showcase was to feature Jennifer Katt, but she is not feeling well. Instead, Jim Thorne (backup winner) will save the day for us and do tonight's showcase - on extremely short notice. He'll be assisted by Ron Goad and John Werntz. His set includes original songs and classics, and celebrates the season. Jim Thorne is a space scientist and singer/songwriter who hosts a nationwide public-access TV show called "Space Quest with Dr. Jim" and provides educational story songs for the Smithsonian National Air & Space Museum. He's also a folk and country musician with Shenandoah Run and leads his own band called The Moondiggers to support the Arlington Planetarium. Jim's website: http://www.jimthornemusic.com
Today brings an unexpected opportunity to perform a showcase of six songs at the Reston-Herndon Folk Club's weekly gathering of local musicians. I plan to do some originals and seasonal tunes tonight at the Amphora Restaurant in Herndon, VA. Beware of the Grinch...
In the 11 years we've traveled this country, we've yet to find another room like the Folk Club. Thirty six years and still going strong, this music community is unlike anything else. Love all yall, we'll see you again in three years!
Here is a short video from last weekend's Memorial Day gathering at The Aerie in Luray, VA. Nancy Truax and Greg Vickers sing a Nancy Griffih song.
Late to share but here are my photos from the Folk Club Camp Out hosted at Wayne & Nancy Truax's new home, The Aerie.
Can we get this guy in our club? ;) https://www.facebook.com/watch/?v=171723284712646
https://www.youtube.com/watch?v=h4IuLFbjB8o&fbclid=IwAR3vYyFb0bxjv7DEykPA-vNc5HdopTG9Ui9Rx0jkMva9u5zwXnOkE5jWeJo