Please if you ever enjoyed yourself in the form of family, band, one timer, etc. this could be beautiful. Joey Tobin is putting this together. Please donate if you have it. 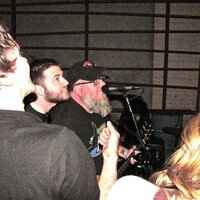 Our goal is to bring an independent music space to Tucson.

The online shop Distro has been updated with all the cassettes and CDs we have available- and we still have some of the OTR clear yellow exclusive of the French Exit/Signals Midwest split. And did we mention how lovely you look today?

Pre-orders for the French Exit/Signals Midwest Split are now available through us and our friends at Solidarity Records. We really weren't joking when we said "Never say die."
http://www.ontherealrecords.com

French Exit from Los Angeles, CA and Signals Midwest from Cleveland, OH both bring two new tracks to this new 7

12th & G Benefit Comp LP, by On The Real Records

RIP THIS PAGE OUT: The Video

Razorcake is, by far, the most important publication we know of and encourage all of you to support those who support you. Donate, subscribe and help keep the printed word stay printed.

Best thing to give for Christmas is also the best thing to receive for Christmas: Records! Check out our distro for tons of records from a ton of DIY labels and support the community that supports you.
(We do realize how shameless we're being right now, yes.)
http://www.ontherealrecords.com/

We updated our webstore and added a bunch of awesome records. Check that sh*t out!

Remember this place? Did you know we made a record?! BAM!

Past Due, by Turkish Techno

As much as these dudes drink all our beer and get on our nerves, we have to admit, they're an amazing band. It helps that their label is run by the hottest piece of ass in the IE, though.

In The Bu (the Malibu song) - Rick Cortes

Straight outta Malibu, Rick Cortes is coming through on his world tour! Check him out here! Check back for more details

Figures- FB tells me "error" but then says it send out that update like 10 times so... sorry everyone. Still love you!

Along with our tumblr account (which you should follow, please!) we now have an official store. Well, almost.

Hey fans of the warehouse! We made a record! It comes with a giant photo collage that you are probably in! Check here for details

Check out these awesome photos from the recording weekend! Records are shipping next week, so preorder now!!

tickets available at our box office!!!

Dead To Me - No Lullabies

the song recorded for the 12th & G benefit comp LP that comes out next week...
recorded at 12th & G by Tim Stasica of French Exit

We're busy crying like proud parents over here because those sweethearts Joyce Manor are recording their next full length for-wait for it-Asian Man Records. Try not to forget us when you guys go all big time!

So how many of our extended 12th & G family plans on being at Awesome Fest 5 in San Diego in 8 days?

Passes are nearly gone- and if you miss out, you're gonna be mighty sad listening to us tell stories of how insane sh*t got so get on it.

Everything is lining up and if all goes as planned, the 12th & G compilation record will be in our hands, ready for your ears by Awesome Fest in San Diego! Sh*t's tight!

French Exit from Los Angeles bring you 4 new action packed rad tracks on this 7"! See them at Seattle Sounfest and Awesome Fest in San Diego this summer!

Hey, you wanna add us and reblog the 12th & G comp info to all your tumblr friends? Of course you do!

Come out and give props to Razorcake at their 10 Year Anniversary show! It’s on August 12th at the American Legion Hall in LA with The Arrivals, Hex Dispensers, Young Offenders, and Toys That Kill!

Commercial for Awesome Fest 5 in San Diego, CA. A music festival with over 60 bands and a whole lot of fun people. Go to www.awesomefest5.com to buy your pas...

On The Real Records now has an (almost) official website. Check here for info on the 12th & G compilation release or pre-order it before it's tentative release on August 30th!

Come out and give props to Razorcake at their 10 Year Anniversary show! It’s on August 12th at the American Legion Hall in LA with The Arrivals, Hex Dispensers, Young Offenders, and Toys That Kill!

As part of our ongoing process to make the 12th&G comp, we want to include some words. How the hell would you guys describe the place to someone who never went?

Only 400 tickets are available, and they totally will sell out, soon probably, and then you'll cry... cry and cry and cry.

Tickets go on sale Friday! Any other thing happening this particular weekend is probably stupid!

Dead To Me – Off With Their Heads – Riverboat Gamblers – Tour Interview

Chicken always said the nicest things about us. That song will also be on our comp- that should be pressed soon, so stay tuned.

What's all this "RIP" "Boo Hoo" "End of Era" bu****it, everyone? We're still here. Everything that made the Warehouse at 12th & G what it is is still in existence- all we're missing is a crummy building with a parking lot. And that's easily replaceable. Everyone wants to know what happened. Here goes: Detectives (not cops, but detectives) strong armed our landlord and threatened to close his doors, and ours, if we continued. They had evidence they had been gathering for months of us conducting business without a license (not really), having events without permits (kinda true), allowing minors to consume alcohol on the premises (a cop's 14-year-old kid went on record saying he had to pay to gain entry and was able to easily acquire alcohol) and they went through our trash and found someone's ziploc bag with some w**d fibers (thanks whoever did that). They were able to monitor our activity through our Twitter, Facebook and even Myspace (Hi Officers! Hope you're happy!) and had plans to raid the Pre-WOW Fest show on Wednesday the 6th (tomorrow) and arrest as many as possible, and charge us with these felonies. Our landlord was able to cut a deal: We never make a peep out of there again, and they forget we existed. Losing the Warehouse > Losing the Warehouse and getting jailed and fined. We know the one neighbor we have went to city council about us, mainly because of the noise. Instead of coming to us directly, they went to the city, and the city realized they weren't making money off of us, which lead to the clampdown. From our humble beginnings as an online skate shop, to meeting up with Marty and Christina, to having some of the greatest bands we've even known come through and play from all over the country, has been some of the single greatest times in our lives. And know what? Those times aren't even close to over. We love all of you so much, you've all become lifelong friends to us, and we're not going to let something this little end anything. If anything, it's going to bring us all closer together. And it's all of your support that gives us the strength to keep going and take this as far as it can go. And in the mean time, if you love this scene, come to every show, support everyone doing everything for it and just because they call us outlaws doesn't mean we are outlaws- Fair is fair! Now we're presented with the best of opportunities- to open a legit venue. One with permits, licenses and possibly more than one restroom. Okay, so there's going to be no alcohol. Big fu***ng deal. Some of you liked to compare us to Gilman Street in Berkeley. We weren't anything close to being Gilman before- but we can be now. So it's time for us to find a new animal house, a better animal house. One that doesn't flood when it rains, or is full of mold, or has mushrooms growing on the carpet that look like beef stroganoff, or was home to a massive tarantula and field mouse, or was infested with crickets, or had an intense ant problem in the fridge, or still has tortilla residue on the ceiling or had a dead rat in the toilet once. Now we can all join together and Voltron a new spot that will be the new, better 12th & G. We cried enough yesterday, now it's time for that PMA. It's only over if you give up, and we're not giving up. 12th & G NEVER SAYS DIE. Love, Tim & Donna

Be the first to know and let us send you an email when The Warehouse at 12th and G posts news and promotions. Your email address will not be used for any other purpose, and you can unsubscribe at any time.

Other Live Music Venues in Chino

Please if you ever enjoyed yourself in the form of family, band, one timer, etc. this could be beautiful. Joey Tobin is putting this together. Please donate if you have it.