A small blue art gallery for the discerning kittens and kitten enthusiasts.

The house was silent, then the peace was broken by a sudden shriek from the homeowner, whose leg had been perforated by a kitten who had momentarily mistaken it for a climbing tree. The kitten was named Murder Mittens for obvious reasons. Her claws grew far more quickly than the householder, whose name was Mx Mouse, could trim them. Mittens didn’t struggle during claw-trimming episodes. Mx Mouse had a hard time putting trimming sessions in their diary, and thus forgot them between episodes. Mx Mouse was distracted and forgetful much of the time, and it fell to Mittens to enforce feeding times and nail-trimmings.

Mittens was docile much of the time. The house has been very quiet, with Mittens sleeping on top of the refrigerator for several hours before the latest round of mayhem had him sued after the leg-scaling incident. Mittens have been startled by Mx Mouse's reaction. They didn’t squeak when Mittens climbed the length of their leg whilst lying up on the couch. It just didn’t make any sense.

It just didn’t make any sense!

Mittens dove under the couch. Mx Mouse pleaded with her and apologize profusely for startling Mittens with the unseemly squeak.

“I’m sorry for startling you, Mittens,” said Mouse. “I truly am. I won’t ever do it again.”

Mittens, who lived in a fast-moving world of kaleidoscopic now, or a succession of nows, allowed herself to be coaxed from under the couch with a lovely can of tuna. After Mittens had eaten half a can of tuna, Mx Mouse picked her up and put her on the table for the semimonthly trimming event. Mittens accepted this with grace and her nails were soon trimmed back to a less-fearsome length.

Claws trimmed; Mittens returned to her post upon the refrigerator. She was pretty sure that Mx Mouse had not noticed the tiny hole where wall met ceiling above the refrigerator. A family of fairies were living there. They were part of a larger troop that inhabited most of the house. Mittens could hear them as they moved about upon their noisy, giggly fairy business. She was watchful and protected the fairies from the tiny demons who rode silverfish in pursuit thereof. The demons ate the fairies and decorated their saddles with diaphanous fairy wings.

In size, fairies are quite like gnats, however their wings are far larger than those of gnats. This let them ride minute air-currents and float around the ceilings of human-sized accommodations with barely a flick of their iridescent wings. Mittens was mistaken in that Mx Mouse had seen the fairies but mistook them for the glints of reflected light reflecting from Mx Mouse’s many silver rings.

Fairies are nomadic, following the great herds and clouds of mold spores and other particulates that bumbled about everywhere. This meant fairies could be found almost anywhere one locked, if one knew what to look for. One sign of a large troop of fairies was how clean the air smelled. They took almost all of the floating particles out of a room over time, and excreted ionized oxygen.

Mis Murder-Mittens Slips Out
Whatever fairies are present, which is almost everywhere, they impart certain pleasant aspects. Not merely cleaning the air of particulates, but just their industriousness makes a location seem safer. Fairies are strongly affected by toxic gases such as carbon monoxide and radon. Those noxious fumes drive fairies out. If you want the benefits of healthy fairies, get radon and carbon monoxide monitors and mitigate these influencers quickly. A house without fairies is often sad and quickly becomes infested with mold, and very hungry demons.

Houses are able to feel the emotions of their residents. Resident troops of fairies and cats can go a long way toward making houses feel comfortable and needed. And emotionally-engaged house can hold itself together for decade after decade as its inhabitants grow and change. This particular house, a high-3-bedroom, 3-bathroom ranch house built in 1915, had enjoyed being part of several families. The children who created chaotic art on its walls and imagined new worlds in its rooms and halls had filled the house with a quiet sense of dignity, love and purpose. It took its responsibilities seriously!

This photograph has gotten over 400 likes in one of my private cat-fancy groups. 9x zoom on an iPhone 12. No effects added.

Keep up a schedule of work. Ignore good and bad for a minute. Just plan for output. This is how professionals create good work. My own plan is to complete one painting per week. Are they all perfect? Heck no! Do I get better over time? Absolutely. Perfection is the enemy of done. Scheduling is the secret of professionalism. Professionalism is the structure underlaying success.

Have you seen this cat?

Please help test a poll plugin recently added to the website. It will only take a second. Go here https://bluekitten.vip/2021/12/12/test-poll/
Fill the poll and come back here to let me know what you hated about it. 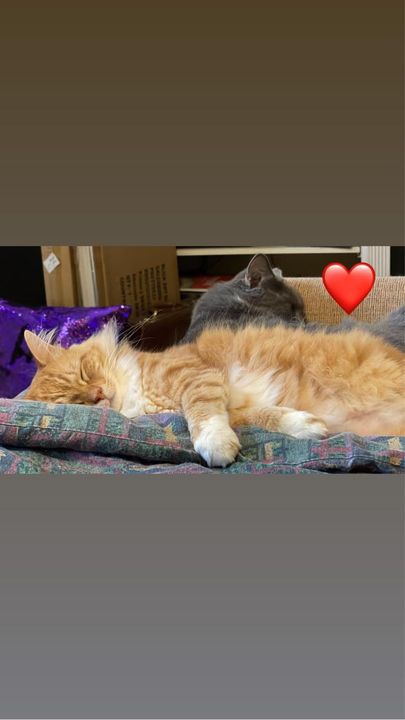 Holidays are good for naps.

I was looking for thinner masking tape for painting, and my friend Linda gave me a couple roles of drafting tape from Mr Pen!

The three Guardians of the Catacombs are on a new adventure. Come with Desiree, Cass and Ozzie on their newest adventure.

Ozzie, Dési & Cass are pregaming for Caturday. Show us how your kittens are getting ready for the weekend!
#caturday #cats #bluekittengallery

Terry is over for breakfast. He comes by every few days. Show us your cats eating!

On the topic of Fraudulent Art.
I am aware that people who steal others’ works are doing it to defraud the public and sell paintings. The old-fashioned art forger, though no less reprehensible, had gotten stuck at a particular level in their training.

They had to be competent artists to produce pieces that would fool the average art-lover. I think they got stuck at a place all creative people get to. They have gotten proficient at really seeing the reference art, and knowing how to reproduce the techniques the original painter/author used.

I wish people had more imagination and didn’t see references the way they do. When writing a paper, the writer gets between 10 and 200 reference articles. Let them ferment. The resultant soup in the writers head becomes a new writing with new ideas. The more references, the more original the final paper.

Painters who copy verbatim a single other painter’s single are doing so because they have nothing but that single image to ferment into their own idea. They only have one reference. They need to learn how to do references. Great paintings are created by allowing oneself to be inundated in reference works, including real life as well as other artists’ work.

Finished! What should I call it?

Be nice to little black cats.

Desirée the Kitten learning to Troubleshoot so she can work in desktop support - https://bluekitten.vip/product/desiree-kitten-troubleshooting/

Desirée CloseUp 2 - Desirée is skeptical about something. “Really?” she says. “Whatever gave you that impression? https://bluekitten.vip/product/desiree-closeup-2/

Afternoon Opossum: A jaunty, self-contained little fellow. They are uncharacteristically out in daylight, enjoying the warmth of the April afternoon sun. (2021)

Graelyn Mouser has a message for you. She brings a reminder that you are strong enough, smart enough and creative enough to be true to your dreams.

Effect can be disquieting.

Fire-Girl Rising is an archetype of birth and destruction.

Be the first to know and let us send you an email when Blue Kitten Gallery posts news and promotions. Your email address will not be used for any other purpose, and you can unsubscribe at any time.

Cass grooving with some Swamp Blues

Other Art Galleries in Chamblee