One of the newest additions of the Midwest Tap Repertory! Located in Ohio, we are a pre-professional, non competitive tap company! Message us for info!

5 minutes until we go LIVE with our 2021 CTR Summer Showcase! Tune in!

DID YOU MISS AUDITIONS!!! You can’t still join the company by video audition due Sept 8!! Email us at [email protected]

We had SO much fun performing at @motorcitytapfest this past week! We learned so much in class and made new friends!! #cletaps216 #tapdancers #tapcompany #tapdance #tap #performance #mctf2021

Late to the game?! No worries!
You have until October 1st to turn in your audition video!

Register for Wing It Tap Intensive to participate!

Check out one of our directors, Kelsey Rose tap dancing on BuzzFeed!

Stephanie, Kevin, and Lauren try to draw someone they've never met (Kelsey) based only on her own description. Whose portrait will get closest to the real th...

CHECK IT OUT!! We are so excited to start our third season! We are geared up to dance in the studio and online with covid preparations. Find out more and register at americantaprep.com! #cletaprep #tapdance #cletaps216

DO YOU LOVE TAP DANCE? ARE YOU IN THE CLE AREA?
Join our CTR family!
2 audition options!
See all details on our website!

Happy Birthday to our director @kelseyroserocks Thank you so much for everything you do! We hope you have an amazing day!! 💗💗💗

We stand and support our friends and family ❤️ #blackouttuesday #theshowmustbepaused

Tune in tomorrow to take class from one of our directors Kelsey Rose!

Music in Motion will be back tomorrow (Thursday, March 26th) for an exciting FREE Beg/Int. WORKSHOP CLASS from Kelsey Rose!

Since her appearance on So You Think You Can Dance, Kelsey has been busy! She is the director of Detroit Tap Repertory, in addition to teaching and performing all over the United States with her touring Tap Intensive: Wing It Tap Intensive and Challenge!

You don't want to miss this one!

Dr. Buster Brown with the Original Hoofers in 1972

Dr. Buster Brown with the Original Hoofers in 1972

REGISTRATION IS NOW OPEN FOR ALL CITIES!

FIRST 20 PEOPLE TO REGISTER WILL RECEIVE $15 OFF THEIR WING IT TAP CHALLENGE ENTRY FEE!

Happy Holidays from our family to yours. May your days be filled with rhythm and art. #tapdance #cletaprep #cletaps216 #cletapfam

We had so much fun dancing on our new beautiful red portable wood floor at Great Northern Mall. Thank you to everyone who came out to support us. Happy Holidays from your local #tapfam Cleveland Tap Repertory ❤️❤️❤️ #cletaprep #cletapfam #cletaps216 #tapdance @ Great Northern Mall

VIDEO AUDITION SUBMISSIONS ARE OPEN! Dancers that can’t make one of our live auditions for our 2020 show in Phoenix can still submit a video for consideration! You will learn the audition material, then send in a link. Looking for intermediate-advanced tap dancers ages 9-adult.
Don’t miss this opportunity to be part of an incredible journey with passionate tap dancers across the country! #experiencetheshow #tap247 #year9

Here is one of our favorite tap routines Sammy performed while touring in Italy, 1962.

We are so excited to be hosting Sarah Savelli for an open intermediate/advanced class Sunday Dec 15! No pre-registration. Cash, check, or PayPal at the door. Don’t miss a great opportunity to train close to home! We’ve got the wood! #tapdance #cletapfam #opportunity #tapclass

More about Sarah: Sarah Savelli started tap dancing at her mother's dance studio in Northeast Ohio at the age of four, and has loved it ever since. She began instructing locally at the age of twelve, and has been teaching, performing, choreographing, and producing Tap events for the past 20+ years. Sarah was a founding and choreographing member of Rhythm ISS... an influential Chicago-based, all-female tap company in the 90's, and on the faculty of numerous studios, tap festivals and competition/conventions in New York City, Chicago, Michigan, and Cleveland; including Steps on Broadway (NYC), Gus Giordano Jazz Dance Center and Lou Conte's (Chicago), the Chicago Human Rhythm Project, Third Coast Rhythm Project, West Coast Dance Explosion, Totally Tap, and Tapperfest Toronto.

Best known for her swift and intricate footwork, Sarah was commissioned on three separate occasions by Playhouse Square (Cleveland, OH) to create and perform in a full-length tap work (Tap into Peace), was the first Capezio ACE Award for Tap choreography finalist in 2010, and appears in the PBS documentary Juba! The Masters of Tap and Percussive Dance. Sarah has studied and performed with many of tap dancing’s historical greats, and most recently has had the pleasure of dancing with Savion Glover in various shows across the USA including “Stepz” at NYC’s Joyce Theater in 2013. She is also the artistic director of the Cleveland Tap Crew, a youth tap ensemble with 50+ members that she established in Northeast Ohio in 2012.

Be the first to know and let us send you an email when Cleveland Tap Repertory posts news and promotions. Your email address will not be used for any other purpose, and you can unsubscribe at any time. 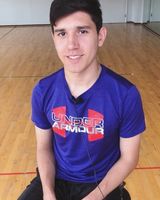