Unique Design Solutions for Residential and Commercial Interiors We understand everyone has individual needs, which in turn makes every project unique.

Garth Andrew Company is a full service design firm specializing in contemporary residential and commercial interiors. Our designer's respect our client's opinions and ideas in order to reach the highest level of satisfaction.

This remodel of our clients’ second home in Naples, Florida is almost complete. Out of state design jobs are always fun and rewarding. Jeff has especially enjoyed working on this one.

When it comes to reupholstery, the possibilities are endless. We can help you find the perfect fabric to give your favorite pieces a new look.

We were happy to lend our Net Dining Chair for her photo shoot.

We are excited to announce that we have recently become a dealer for a custom dining furniture line made in the USA for over 35 years! It’s time to prepare for the long awaited family gatherings around the table enjoying a holiday meal. With the recent shortages and delays, give us a call to get your order in now.

Wishing all of you a happy and safe holiday weekend! We will be closing today at 1:00 p.m and closed on Monday, July 5th in observance of Independence Day.

Our designers can help you design your functional outdoor living spaces as an extension of your indoors! We carry many outdoor furniture lines, including outdoor accessories, lighting, and rugs. Place your order now for summer delivery.

Check out Gillian Andrew’s interview on Scandinavian design in the Spring issue of 330 Homes magazine!

Paint is one of the easiest ways to transform a room. Need help picking a color? Contact us for a design consultation. Posted • Create the ultimate retreat with our January Color of the Month, Urbane Bronze SW 7048.

Black and white is one of the hottest trends in interior design right now. We love how versatile it is, with endless possibilities from subdued to statement making. Contact us to find out how to incorporate this trend into your home.

https://aaronrich.kw.com/property/LST-6709218314721189892-0
We have office/retail space in our building available for rent. Please check our this link and if you or anyone you know needs office or retail space, please contact our realtor at Keller Willians.
We are looking forward to sharing this wonderful historic building.

Okay, how cool are these two chairs and huge cube ottoman?! ❤️ We were loving every minute of this transformation.

Jill has a great eye for design! Contact them for help on your next interior design project, you definitely won’t be disappointed 😊

If you find yourself working from home, space for an office can be hard to come by. Here are a few compact desk solutions that will give you a productive place to work—even if the corner office is in the corner of your bedroom.

Here is a photo of a bathroom project completed by Jeff Andrew that showcases one of the many creative ways to use wallpaper. 🦋

While this is not a time of “business as usual” and our install dates and deadlines may have changed, we are navigating the best course of action as a business. Though our doors have been closed to the public, we are still here for you working remotely to finish current projects and starting new ones. While spending more time at home, you may be noticing and paying extra attention to rooms that need updating and remodeling. We are open and available to start new projects over the phone and by email. Please email your photos and questions to us at [email protected] or feel free to give us a call at (330) 666-2504. We will be sure to get right back to you. Thank you and stay safe and healthy!

Check out these before and after photos of a recent double bathroom remodel and refresh by our designer, Jill Andrew.

Barn doors provide a functional, decorative design element March 21, 2019 Tweet by Erica Peterson The use of barn doors in home interior design continues to be a popular trend. Dean Gerbasi, head designer at Pine Tree Barn in Wooster, said he thinks that’s because they reflect an overall shift tow...

Check out these before and after pictures of a recent bedroom/bathroom remodel!

We just installed these beautiful new mirrors in our client's home. They are a great way to visually expand your space and the view!

We are excited to have the new Magnolia Home by Joanna Gaines Wallcoverings! They are thoughtfully designed to inspire and created to help tell your story with beautiful and purposeful patterns to suit your own unique style.

Interior Designer, Gillian Andrew, from The Garth Andrew Co. was given the honor of choosing all of the fabrics used in the Arden Riddle Exhibit at the Canton Museum of Art. Arden Riddle was a furniture designer and fabricator of Mid-Century Modern Designs. The Challenge Gillian had was coordinating all of the fabrics so they could be placed anywhere throughout the three room exhibit. The exhibit goes from now until October 28th. Please call The Canton Art Museum or Garth Andrew Co. (330) 666-2504 for more information. You're Invited to the Opening Reception for the Arden Riddle Mid-Century Design Exhibit at the Canto Museum of Art!

The color palette for designers in 2018 will be big and bold, if Pantone’s and Sherwin-Williams’ colors of the year are any indication.

Sherwin-Williams describes its Oceanside as “a fusion of rich blue with jewel-toned green,” creating a “complex, deep color,” while Pantone calls its Ultra Violet “a dramatically provocative and thoughtful purple shade.”

Why are such daring colors so trendy?

“It’s partly a reaction to the popularity of neutrals the past few years,” said Sue Wadden, director of color marketing at Sherwin-Williams. “People are ready for more color in their lives.”

It also is a reflection of the new generation of consumers, said Gillian Andrew, interior designer with Garth Andrew Company in Bath.

“Millennials are much bolder than we were,” Andrew said. “People have always been a little afraid of color. But now we’re seeing more bold choices.”

Oceanside is basically a bolder, updated version of the French country blue that was so popular, she said.

The trend toward jewel tones is a welcome one, especially in Northeast Ohio, said Mary Stickney, owner of Monarch Designs, an interior design consulting business in Brecksville.

“For quite some time now, grays and other neutrals have dominated interiors,” she said. “In Ohio and places with similar climates, we see enough gray skies. The return of color is long overdue.”

Such rich colors often make a great choice in decorating because they are so versatile, Wadden said.

“[Oceanside] can be incorporated into modern or historic design styles, because it pairs so well with both neutrals and brighter colors like pinks and reds,” she said.

Some homeowners may feel intimidated by such intense colors, but those who are willing to try them can make an impression.

Using such colors on kitchen cabinets or a hallway can make a big impact, especially for someone not ready to commit an entire room to the color, Wadden said.

“Or consider the rooms in your home that are used less often, like a craft room or guest bath. Those are great places to experiment with color,” she said.

A statement wall can showcase a bold color, Andrew said. “People need to remember that paint is temporary. They can repaint if they don’t like it,” she said.

“If you have a neutral room, you can pull the color in with accessories,” Andrew said. “That way, it’s nothing permanent, so if you don’t like it, you’re not stuck with a big purple couch.”

The bold color doesn’t have to be the dominant shade throughout the entire house, Stickney said. She suggests using it in a variety of ways, perhaps as a wall color in a small bathroom, in throw pillows in a bedroom or as a window treatment fabric or area rug in another room.

“Now it becomes a thread that weaves all or most of the rooms together,” she said.

If a color feels too bold, try a lighter, softer version of it, Andrew said.

“Ultra Violet is a brave color to use in the entire décor,” she said.
“Maybe a more grayish purple, like an eggplant, will work better.”
Stickney agreed, saying a jewel tone can be used as a starting point in determining the color story.

“There is no rule on how dark or light a color has to be,” she said. “Some people like lighter, brighter, airier spaces while others like darker, more intimate spaces.”

And jewel tones complement each other, Stickney added, “so don’t be afraid to have more than one accent color in the same room.”

Just a splash of color makes a difference, Andrew said.

“Even if you slide in just a hint of it, the color can change not only the room, but the mood of those in it,” she said.

Stickney agreed. “A touch of color can bring an entire room to life, or a whole house for that matter.”

Be the first to know and let us send you an email when Garth Andrew Company posts news and promotions. Your email address will not be used for any other purpose, and you can unsubscribe at any time. 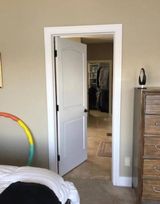 Other Art Galleries in Akron

Other Art Galleries in Akron (show all)