RED dances with Fire Poi, Fire fans or Palm candles! For places where fire is not approved, Flag d Since 2004, RED has been enchanting audiences with her fire / flag dancing.

Although, she has taken many different styles of dance classes throughout her life, she is mostly self-taught with Fire Poi. She incorporates this blend of dance when she dances with her fire fans. In 2008, she had the honor of being one of 22 people chosen from all over the world to appear in the Circles of Light 2008 – Spinning and twirling from around the world http://www.homeofpoi.c

Although, she has taken many different styles of dance classes throughout her life, she is mostly self-taught with Fire Poi. She incorporates this blend of dance when she dances with her fire fans. In 2008, she had the honor of being one of 22 people chosen from all over the world to appear in the Circles of Light 2008 – Spinning and twirling from around the world http://www.homeofpoi.c

Performing at Masque of the Red Death at the Akron Civic Theater!

Had a fun time fire dancing in Cleveland tonight for an epic birthday party!

Going to be LED dancing here tonight! Stay in your car and stay warm! 🔥 💡

READY FOR A SPECTACULAR DRIVE THRU EXPERIENCE? This event is viewed from the comfort of your own car and socially distanced. There will be appearances and Valentines from your favorite Princesses & Super Heroes! You will also see Stilt Walkers, Jugglers, and receive a Special Treat, and MORE! If you...

One of the most calming and powerful actions you can do to intervene in a stormy world is to stand up and show your soul. Soul on deck shines like gold in dark times. The light of the soul throws sparks, can send up flares, builds signal fires, causes proper matters to catch fire. To display the lantern of soul in shadowy times like these -- to be fierce and to show mercy toward others; both are acts of immense bravery and greatest necessity. Struggling souls catch light from other souls who are fully lit and willing to show it. If you would help to calm the tumult, this is one of the strongest things you can do.
When a great ship is in harbor and moored, it is safe, there can be no doubt. But that is not what great ships are built for.
~ Clarissa Pinkola Estes
Art by Lucy Campbell

May this Christmas Eve find you blessed with holiday spirit! Should you require a bit more urging into the yuletide mood, below, for your enjoyment, is a parody of The Raven involving sentient plum pudding, first published in "Tit-Bits" on December 23, 1882.

Listen, all ! I tell what happened on the night of Christmas Day,
After I'd been eating pudding in a very reckless way.
Just as Christmas Day was dying, as I on my bed was lying,
When to slumber I was trying, when I'd just begun to snore,
I became aware of something rolling on my chamber floor—
Of a most mysterious rumbling, rolling on my chamber floor.
Only this and nothing more!

Partly waking, partly sleeping, all my flesh with horror creeping,
I could hear it tumbling, leaping, rolling on my chamber floor;
Underneath the bedclothes sinking, I betook myself to thinking
If it might not be a kitten that had entered at the door;
'Yes,' said I, 'it is a kitten, entered at the open door.
This it is and nothing more.'

From its mouth a vapour steaming, while its fiery eyes were gleaming,
Gleaming fiercely bright, and seeming fixedly to scan me o'er;
Soon it rolled and rumbled nearer, and its aim becoming clearer,
I could see that it intended jumping higher than the floor;
Yes, it jumped upon my chest, and when in pain I gave a roar,
All it said was, 'Nevermore.'

Still in spite of my confessing, that plum pudding kept on pressing,
Pressing with its weight tremendous ever on my bosom's core.
Till I cried, 'O, monster mighty, in my work I'm often flighty.
But, if you will now forgive me, I'll work hard at classic lore!'
At the end of this vacation I'll work hard at classic lore,
Quoth the pudding 'Nevermore.'

' Be that word our sign of parting, pudding!' then I shrieked, upstarting,
' Get thee back — get off my stomach, roll again upon the floor!'
Thus I struggled, loudly screaming, till I found I had been dreaming.
Dreaming like a famous poet once had dreamt in days of yore;
But although 'twas like the poet's dream he dreamt in days of yore.
May I dream it nevermore!"

Thank you to the World of Poe Blog for furnishing this yuletide parody poem. Transcript
Her: what are you into
Me: pokémon
Her: no i mean what's your type?
Me: oh, fire

Thanks for recognizing that Red is better than purple 😉

Will you be seeing red after taking this quiz?

It's okay to support social distancing but still feel sad that life is in limbo. You can support your nurses and doctors and also feel bummed on behalf of your grandparents and your missed connections. Sadness is not a contest, it's ok to feel it all.

This is why people say “do not try this at home“ Too Young to Burn

Too Young to Burn This little girl and her husky have gone viral due to their absolutely adorable costumes. The girl, named Agata, was celebrating Carnival in Cortina d’Ampezzo, Italy, dressed as the classic fairytale character Little Red Riding Hood. Agata was a precious sight in her own right, but her companion m...

Be the first to know and let us send you an email when RED on FIRE posts news and promotions. Your email address will not be used for any other purpose, and you can unsubscribe at any time.

Send a message to RED on FIRE: 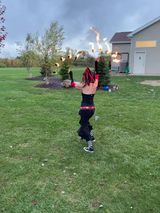 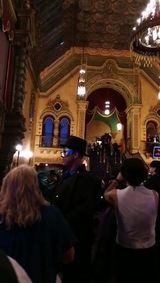 April: I hope you are well. I have pancreatic cancer. Dave Watkins [email protected]
Red putting on a very good show for a swanky corporate event. Theme is Fire and Ice