Just like you, only probably older. Since 1981 we have been lucky enough to have Role-playing games as a hobby, and since 1990 as a career. Arts & entertainment

This adventure is primarily designed for use with Chivalry &
Sorcery 5th Edition. It can also be adapted very easily for use with other roleplaying systems.

This adventure is deliberately set against a background of high chivalry, in a land not unlike the Britain of Arthurian legend. As such, it lends itself particularly well to games with a chivalric flavour and is presented here for Chivalry & Sorcery 5th Edition

A new series of books covering some of the towns and Cities of Anderia as well as others that are prominent in some of the adventures that I have written. They will have a map of the area, the town and at least one of the interesting locations within the town. Many of the locations will be detailed.... 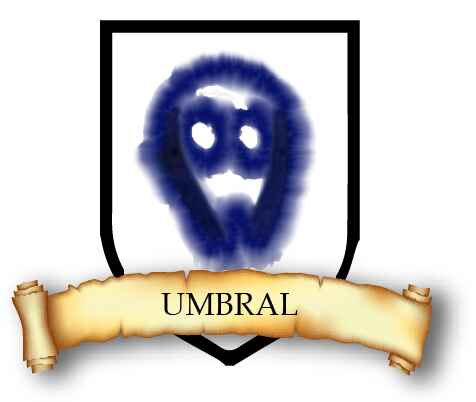 Working on the new sourcebook called Arcane Anderia. Thought everyone might like a sneak peek. Some of the contents of the book: - History of the guild of Arcane Lore - Done Main guild in Constitution - Done List of guilds: name: location: size: speciality: important items / texts / Guild structure.... 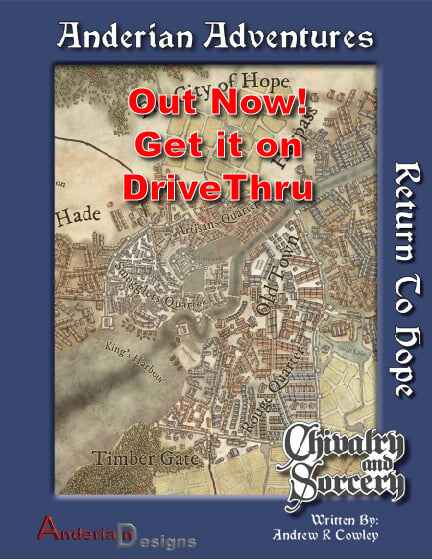 All three adventures in one bundle for Xmas $14.99

The third in the series for Chivalry & Sorcery 5th Edition, set in the Fantasy Kingdom of Anderia. First was the Ebony Box. In That Adventure, the characters recovered the Churches artefact. The second once was set in the isolated Town of Gengorge, where things got unreal. The characters were tasked with the rescue of the Mayor's Son.

In this game, the challenges are bigger and the rewards are commensurate with the scale of the adventure. This covers the Ancient cave of Bitter fruits that legend tells have magickal properties. Can the group survive the mountains and the guardians of the caverns

The game is for a group of beginning adventurers. 2nd -4th Level. As the series progresses the characters will have the chance to make powerful allies and more than a few enemies too. Magick and ancient powers will come into play as the group attempt to thwart the plot of a powerful mastermind, who calls himself 'The Master', hell-bent on bringing back something that should never have
existed. 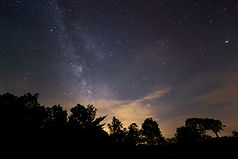 Set in the Holy Roman Empire at the beginning of the 13th Century, the campaign centres around a Guild of Arcane Lore called Reedwater. Located on the mighty Danube river near Ingolstadt the campaign covers the surrounding area and personalities, the Wizards of the guild, local monsters and fey crea...

Almost Finished!
80-page adventure, filled with magic, demons and moral and ethical dilemmas. The chance to save Anderia, make powerful allies and enemies.

Fate Zone Map Pack - A selection of modern / sci fie Zone maps for use with most fate games.

Don't forget that there are lots of C&S merchandise over here.
I got this for someone's birthday present.

Had sales of the novel going out, a fun read.

Corrine's Star - Starpoint Military Academy is shocked by the news our solar system will be visited by the rogue planet Omnis. Three cade

Brittannia Game Designs Ltd (BGD) has reached an agreement with Anderian Designs Ltd (AD) that the Reedwater Campaign and its three related adventures from AD previously for the FATE RPG will be converted to Chivalry and Sorcery 5th Edition and made available on the forthcoming community program C&S Scriptorium to be hosted by Drivethrurpg.

The campaign is set in the early 13th Century and the challenges that come with living in the Holy Roman Empire under civil war. The campaign details of the area around the Arcane Guild of Reedwater, it's magical Island and the creatures, wizards and fey that live there. As well as the ordinary townsfolk of Ingolstadt, Donau and Egwell. The initial campaign guide includes a cunning town based adventure to challenge the players.

Brittannia Game Designs Ltd are the owners and publishers of the role-playing game Chivalry and Sorcery, The company is based in the Black Country in the UK Midlands.

Anderian Designs Ltd are a company who carries out photography and design work and also publishes some role-playing game products, the company is based in the Black Country in the UK Midlands.

View this amazing photo collection, get inspired and unleash your creativity! 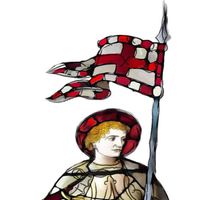 View this amazing photo collection, get inspired and unleash your creativity!

ANDERIAN DESIGNS
is proud to part of Chivalry & Sorcery's next edition

Be the first to know and let us send you an email when Anderian Designs posts news and promotions. Your email address will not be used for any other purpose, and you can unsubscribe at any time.