Cool customer. Got his 2nd tattoo with 60 years. 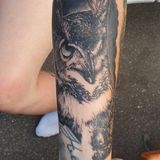 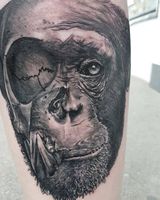 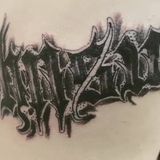 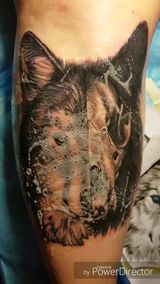 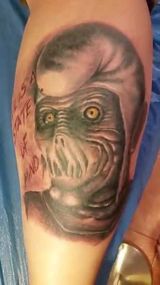 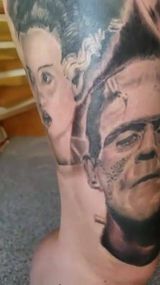 Here we go, batfriends! I finally received the 2CD Digipak samples (including a 16 pages booklet) of the new Bathead album "Bat Undead" which will be officially released by Sick Taste Records on friday. I want to thank you for all the pre-orders until now, which will go out tomorrow! 🦇📤🙏 If you want to save your copy (limited to 300 pieces) just give your order via Bandcamp: https://bathead.bandcamp.com/album/bat-undead After 16 months of work for this album i'm really happy that it has been finally realized. Many thanks to all involved people until now: - Andreas Reikerstorfer (Sick Taste Records) for realisation - Daniel Hallhuber ( Young & Cold Studio ) for Mastering - Edo Kautsar ( Horror Rudey ) for the cover artwork - Mimi Geißler ( Graveyard_Queen ) for the vampire picture as a back cover girl - Moritz Wanke ( Xyntec ) for the booklet photo shootings - Thomas Kühnert ( UeberdosisArts ) for the music videos and shooting pics - Toxi Ghoul, Norman Flanders, Jim Raw, Konrad Kaden, Finkseye, Elias Rischmaui, Ralph Kael for participating as guest singers - Chris Dupont ( Straight Ahead Movement ) for the support - All my friends, fans, supporters, befriended artists & test listeners for supporting and believing in this project Without you this would never have been possible. Many thanks to all of you, i really love you. 💀🦇🖤
Happy weekend, batfriends! Today we had a wonderful video shoot for the very personal track "Lost In Darkness Forever" which will be part of the upcoming Bathead album "Bat Undead" released by Sick Taste Records next friday. You can pre-order the album directly via Bandcamp: https://bathead.bandcamp.com/album/bat-undead The shooting took place at a forest cemetery as well as in the local forests and it was hellishly cold, so our feet froze off! Many thanks to the wonderful (undead) model as well as to UeberdosisArts who took part in recording and will take part in creation of this video! Here you can enjoy some nice impressions. Stay tuned for more! 💀🦇👻🎬🖤
Happy World Goth Day, batfriends! 💀🦇🖤 New song & music video for "Bathead - Black Magic" coming out soon. This will be the first track released for the upcoming album out this fall by Sick Taste Records. Promo pic by UeberdosisArts!