The PERIODIC PERIODICAL is a platform of original and third-party news and commentary on current topics and events. It's where news of the day that catalyses a passionate reaction has an outlet for a passionate response.

The PERIODIC PERIODICAL is a platform of news and commentary on current topics and events. PERIODIC PERIODICAL's format is quite simple: News of the day that catalyses a passionate reaction should have an outlet for a passionate response. The postings here are a mix of responses to unsolicited third-party news-stories and commentaries as well as original stories and opinion editorials created by t

The PERIODIC PERIODICAL is a platform of news and commentary on current topics and events. PERIODIC PERIODICAL's format is quite simple: News of the day that catalyses a passionate reaction should have an outlet for a passionate response. The postings here are a mix of responses to unsolicited third-party news-stories and commentaries as well as original stories and opinion editorials created by t

Taking a position to condemn, demonize and to even neutralize Russia over its aggression against the Ukraine does by no means imply taking a position on the rights and wrongs of the millenia-old symbiosis between the two regional peoples.

Understanding the history of geopolitics of the region makes it easy to understand Russia's revisionistic medieval ambitions - not to mention the concerted efforts of the eastern European counties, but particularly Poland and the Baltic countries, to contain Russian imperialism.

Considering the intertwined history of the Russian and the Ukrainian people, arguing whether or not Ukraine should have become an independent country or whether it belonged in an historical union with Russia or even Poland can always be put up for debate.

But after 31 years of independence and reorientation westwards, arguing the pros and cons of Ukrainian self-determination remains a moot point particularly because Russia ultimately accepted Ukrainian sovereignty, as did the rest of the world.

Russia's revisionist change of mind and the West's inability to avert the Russian invasion is particularly morally repulsive because the Ukraine - having been coerced by the west into giving up its arsenal of Soviet-era nuclear weapons - posed not even the slightest offensive military threat to Russia or to any of its neighbors.

Chamberlain, Molotov-Ribbentrop, Sudetenland, rest-Czechoslovakia, the Anschluss With Austria and, ultimately, [the] Gleiwitz [incidence] all come to mind when thinking Russia's contemptuous premeditated invasions of Georgia, Chechnya, Crimea, Donetsk, Luhansk and rest-Ukraine - all having taken place under false pretenses under the watchful yet naïve eyes of the politically castrated Chamberlains of the western world and despite huge social inequalities within the Russian federation.

In fact, instead of choosing to look forward and engage all of its citizens in the exploitation of its seemingly infinite abundance of natural resources, educational and scientific prowess and skilled human resources and become THE undisputed wealthiest country in the world in both overall and per capita GDP - which it could truly become - Russia prefers to focus almost its entire energy on its millenia-old bellicose, serf-ridden imperial past as well as keep itself held hostage by a tiny group of unconscionably thieving and sometimes even ruthless oligarchic thugs.

Russians are responsible for their own fate and the vast majority of them, through their silence, are also responsible - even if only tacitly - for enabling their leadership's actions.

Note:
Several voices have shown concern over the West's sanctions against Russia, while not imposing any sanctions at all on some countries or harsher ones on others. This is certainly a topic that can be saved for further discussion - albeit at another time.

Photo : anti-war demonstration, Saturday night - in front of the Embassy of the Russian Federation to Israel, in Tel Aviv

This commentary may be shared and reproduced citing the copyright.

Despite the unwise dimension of the backlash aimed at Whoopi Goldberg (as it truly went a bit overboard), perhaps many of us can learn from Whoopi's experience by curbing our unbridled quest at being wannabe experts on just about every topic under the sun simply because we have an audience we feel we can blab on and on and on to.

Talk-shows, Facebook and other fora where we can often find a mass audience have, also, proven themselves a scourge that force moderators and hosts into endless conversations about lots of nothing, stupid, dumb and ignorant stuff. Not only are the problems being discussed rarely resolved, such fora generally seem to foster nothing more than a continuous growth in the supply of couch potatoes experts.

Who sounds off in ignorance? These days, who doesn’t?

By Oliver Bradley in Berlin The 72nd edition of the Berlinale ended Sunday with a Crystal Bear for Best Documentary Film going to Columbian filmmaker and social activist Clare Weiskopf for her film “Alis”. Screened at the festival’s Generation 14plus Section (young-adult coming-of-age themes),...

Kraków/Auschwitz, last week. Policymaking education leaders from across Europe: ...assessing, discussing and creating a framework to retool Holocaust education and make it more effective and sustainable for the future.

Most speeches in English.
https://www.audiatur-online.ch/2021/11/17/konferenz-der-european-jewish-association-in-krakau/

Despite having had, what I considered, the most tasteful, if not the best, livery, interior design and uniforms in the industry, it simply couldn't outweigh the state carrier's overall shoddy service.
ALITALIA CLIPS IT'S WINGS. BUT NOT REALLY!

A few days ago at Frankfurt Airport, I saw what will probably be the last operating Alitalia flight that I will ever see.

A week earlier, I took these pictures of Alitalia aircraft at Rome Fiumicino, while taxiing towards takeoff to Berlin.

Admittedly, I felt a tad bit nostalgic while taking these photos - but only because I've known the airline all of my life.

Seeing a familiar name disappear can certainly wake some emotion.
Nevertheless, I feel absolutely no pity for the airline's long-overdue closure.

Unlike Alitalia's livery, interior design and uniforms - which I found to be among the best and most tasteful in the industry - [particularly Cabin-class] service was, comparatively [to other airlines], a veritable hit or miss; never consistent; far too often loaded with haughtiness.

Don't get me wrong, I've certainly had several delightful experiences on-board Alitalia flights. But they were far too few, with service rarely matching the looks of the crew.

Alitalia service was without a doubt far more show than substance!

Of all the 'world-class' carriers I've flown, and I've certainly flown on dozens if not hundreds of brands, Alitalia truly gets the worst marks of them all.

A British friend of mine - a management guru of the hospitality industry - did his utter best to instill customer-service-excellence in the training and retraining of Alitalia cabin staff members.

He made quite a bit of headway. The impact of his work was visible. But typical for much of Italy's state sector, investment in customer service, productivity and management ethics far too rarely takes priority.

The abrupt ending of Alitalia's excellence training program -quick my friend led - is a case-in-point of typical worst-management-practices of the Italian public sector.

And let's not forget the havoc caused to travelers by the airline's crippling strikes - hundreds if not thousands of them over the year.

Alitalia is officially shutting down. But even the newly founded state carrier slated to replace it, this week - ITA (Italia Trasporto Aereo) - will undoubtedly not fare any better. Because ITA will be nothing other than a rebranded, albeit downsized version of Alitalia.

Management will continue to be, for the most part, influenced by the worst-management-practices typical for many, if not most, state-owned enterprises.

I suspect ITA's management team - both led by Alitalia CEO Fabio Lazzerini & Co. - won't make much headway in breaking out of Alitalia's history of never-ending puberty.

The new airline will literally be flying on Alitalia's clipped wings. Not a good precedent at all!

More money will probably be wasted and I seriously doubt that service will change. Although I would truly welcome an overall improvement, I simply don't see it happening. The mere fact that ITA will make a bid to aquire the Alitalia brand, already spells doom.

The brand is a laughing stock of the industry. The mere attempt at reviving it only goes to show what kind of management mentality we're facing with the, so-called, "new" airline [leadership].

Although I do hope that my assessment is wrong, I'm convinced that Alitalia's-ITA's change of attire simply won't be enough. A mentality shift in its DNA is what is sorely needed.

Bye bye Alitalia. I certainly won't miss your service even though I expect that ITA will only be more of the same.

Note:
Alitalia's size and post-market-liberalization [free-skies-era] continued survival had only to do with the size and economic strength of the state that propped it up.

Note:
The fact that Alitalia was a state-owned carrier was not the cause of its demise. Most of the world's best airlines - FAR outbeating the best that the US and Europe have to offer - are government owned.
One can't generalize any system of corporate management. Alitalia simply represents the general state of the Italian state's management DNA. The Italian state railway company FS proves that exceptions do exist. FS is by far better managed and more efficient than not only Alitalia. It also puts the German railway company DB to shame - far outpassing it in speed and punctuality. It's quality is eben superior to that of Italy's private rail company ITALO. I've noted true improvements with FS. So, yes, there's hope even for Italy's newly founded state run airline. I won't hold my breath though! 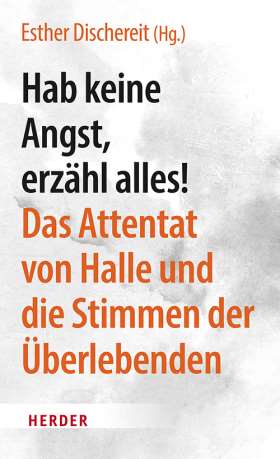 ENGLISH TEXT :
The latest work bu Esther Dischereit will be launched Sept. 28th and officially presented to the public during the Frankfurt Book Fair, on October 23.

"Do not be afraid, tell everything! The attacks in Halle and the voices of the survivors", edited by Esther Dischereit.

Numerous victims of the racially, xenophobic and Antisemitic motivated murderous Yom Kippur attacks against a synagogue, a nearby kebab shop and others, on October 9, 2019, testified at the trial of the terrorist. Their statements, conversations and their personal portraits convey a moving picture of their courage, their strength and their resolve to go on living; while also asking questions about solidarity and cohesion in a diverse society.

In this impressive compilation of documents, Esther Dischereit places special attention on the legal and political process that followed the attacks.

MEDIA WORK
Clients may hire us to manage their media relations. In this sense, we operate as their external press-office and reputation manager. We and our partners have a wide range of channels which allow us to supply news agencies, news outlets, bloggers, broadcasters and individual journalists with information aimed at enhancing the image of our clients. Information we distribute includes press releases, news stories as well as audio and video footage. Media monitoring can and should be included in the follow-up work.