Based on flexible collaborations we develop and realise concepts of contemporary art in Europe. The initiative was founded in 2012 and is registered in Berlin as a no-profit association for arts and culture. Frontviews aims no profit in a classical understanding of artbussiness and is official registred as a non commercial association under the tax-number 27 / 653 / 56321 Berlin, Finanzamt für Kör

Based on flexible collaborations we develop and realise concepts of contemporary art in Europe. The initiative was founded in 2012 and is registered in Berlin as a no-profit association for arts and culture. Frontviews aims no profit in a classical understanding of artbussiness and is official registred as a non commercial association under the tax-number 27 / 653 / 56321 Berlin, Finanzamt für Kör

https://www.tip-berlin.de/kultur/ausstellungen/neue-kulturorte-in-alten-berliner-bauten/ .... yeah yeah is in the air

The exhibition "Routes of Empathy" takes a broader look at artistic action as a social activity. The focus here is on the ability to empathise and/or think oneself into something; into a counterpart, a person, another being, an object, a feeling, a thought, a material, a substance, a movement, a position, a situation, a living space, an atmosphere, a location, ... .
"Routes of Empathy" explores different forms and gradations of the empathic.
It follows different strands of empathy, looking at both its positive, society-nourishing side, its creative and subversive potential, and its negative side in terms of abuse of power.

The projections and drawings of Timo Herbst and Marcus Nebe represent moments of social changes and the consequences. For instance, uprisings and protests, when people oppose the police or other adversaries. There are three artworks presented at the exhibition: 5-channel video installation “Play by Rules”, drawing “Ephemera” and 9-part video projection called “Shanghai Cables (Pt. 2)”.The video work “Play by Rules”, for example, shows the desire of mass media to record the moment of intensity of emotions during people´s struggle. Nowadays the majority of people pay attention to development of image of ourselves and our world. This topic concerns each of us and that is why it is vital these days.

When things begin to get loud and agitated, when tumult and protest start to emerge, when people rush into the streets and confront the police or other opponents, when resistance meets resistance and the exception breaks out, in which no one possesses control over the situation any longer, then it’s not just a moment when on all sides emotions are at their peak — there are cameras present the entire time. And so the power struggle over the production of images starts to take its course.
Timo Herbst and Marcus Nebe situate the visitors of their exhibition in the middle of moments, in which people are wrestling over the representations that will ultimately shape a political event. The visually and emotionally moving images of participants interacting with one another, the waving of flags, the scenes of violence: such images determine the public narrative of who was where, why they did what they did, and against whom — and who might have won.
However, it is not these narratives that we see in the 5-channel video installation “Play by Rules”, but rather the motors behind the production of such narratives: the image producers with their technical tools, who stand within such events and lead the fight over the creation of these images while refraining from shining the spotlight on themselves and their own bodies, gestures, and activities. TV channels, live reporters, bloggers, activists, agitators, provocateurs and critical documentarists struggle to assert their respective perspectives and seek the sovereignty of interpretation.

Media corporations, public broadcasters, social media networks and numerous peer groups and influencers compete not only over the moment itself, but for a piece of history and the way this moment will be written in sound and image. This is the stage of the conflicts of our time, and with their video installation, Herbst and Nebe locate us within the tumultuous moment when the images of such situations are created, images from which public opinion will be produced.
In recent times the struggle for interpretative sovereignty has increasingly manifested during the pandemic as literal attacks of private individuals against journalists, disguised as claims of freedom of expression exercised on the streets as well as in private digital media spaces which function as a rebellion against public media, perceived by some as supposedly manipulative and propagandistic. Nearly as if an eye for an eye, a tooth for a tooth. In Play by Rules this contemporary experience also shines through even though the work was created before the pandemic.
This theme in the exhibition is reinforced by the drawings of Timo Herbst, which deal with the visual history of public dissent and its (self-)staging, either by working through specific, individual gestures like a protest gesture made with the hand, or through the ways that crowds of people in their tense groups dynamics were referenced in history. The drawing “Ephemera”, for example, refers to historical images intended for a single or short-term use, such as prints from daily newspapers, posters or advertising. Together with the historian Duane Corpis, Herbst researched historical images of protests and states of emergency as source material to draw an interwoven chain of bodies, which visually explores the self- staging and memory of dissent in public space.
 
 
In a third work, the 9-part video projection called “Shanghai Cables (Pt. 2)”, the focus finally shifts onto the influence exerted by the exhibition visitors on the image process itself. The viewers themselves become a tangible part of the dynamic that allows images to be rendered visible, disrupted, or at the very least altered. The sequence and combinations of the video images, which document the process of gentrification in Shanghai’s Old Town, change according to the movements of people within the space of the exhibition.

The claim to participate in the process by which we create images of what the world and society are to us, has long become a matter concerning many (quite varied) people as a result of digitalization and social media. As a result, the always, already conflictual process of negotiating representation — by showing what is and what was — has become collectivized anew. This process not only concerns us all, we are already a part of it.
Alexander Koch

time to talk - at "good to talk.".
This Afternoon live and under the tents
at HAUNT.

Ups..., Two giants just dropped their caps on our yard.

"Vagabonds" from Dafni Barbageorgopoulou just landed. Wow, everything is set in the mood for THE OPENING TODAY!!

The Heat is on: "Freunde ohne Bücher" - now live and direct at our HAUNT yard. The first ART BOOK FAIR we are hosting. TODAY until 8 pm. Please come over and have your on looks on books on this beautiful late summer afternoon and evening!

"Freunde ohne Bücher" - IS HAPPENING NOW!!
The first art book fair at HAUNT. Come one come all - at this beautiful sunday.

The word "God-e (t)" is phonetically reminiscent of the German-French use of „Ade!“ „Adieu!“ to herald the ritual of farewell. If the emphasis is shifted to the o and phonetically to English, „God-et" becomes a triumphant signal of understanding. The term "Godet", pronounced in French with Dutch roots, is a technical term from the tailoring trade and defines a wedge-shaped insert in a slit.
The title of the exhibition Godet, my friend! by Kathrin Köster and Sonja Schrader plays with the dance figure of farewell and triumph, which is expressed installation-wise in a juxtaposition of bodies, their spatial compression, as well as their energetic rearrangement.

We can only warmly invite you to have a look on our fresh Workshop Program "TOPIA".
https://www.hauntberlin.de/events/topia-workshops/
If you are interested in the Urban Ecology of Berlin and you want to share your knowledge and creativity with a diverse group of artists and activists, these are the venues to be. 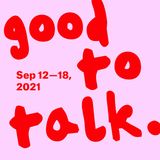 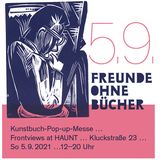 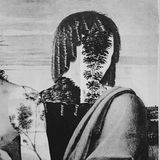 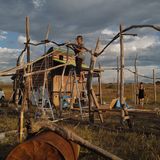 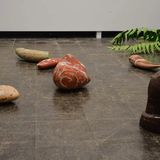 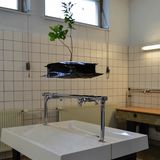 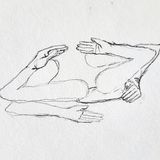 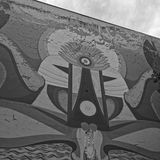 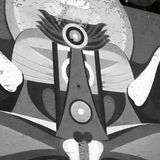 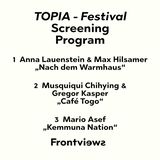 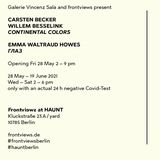 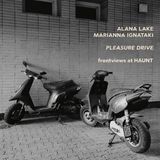 it will happen again this night. http://frontviews.de/exhibition.php?exhibition_id=61
http://www.daily-lazy.com/2018/05/missing-links-at-daily-lazy-projects.html Right now in Athens, so glad to be there, thanks again to Daily Lazy and our artists who made it happen!!
https://www.fastcodesign.com/90132632/ai-is-inventing-its-own-perfect-languages-should-we-let-it
https://www.fastcodesign.com/90132632/ai-is-inventing-its-own-perfect-languages-should-we-let-it
https://www.freitag.de/autoren/anna-fastabend/es-regnet-nackte-maenner?utm_content=buffer3fc51&utm_medium=social&utm_source=facebook.com&utm_campaign=buffer