"Blinding, inescapable, hard, 90's IDM-leaning Techno Wonders"
Liquid Sessions is out now at HARDWAX and many other shops worldwide!
Music by D. Carbone Galaxian Lucindo and myself.
3TH records This mix is ​​a transversal journey retracing some of my most significant influences beyond techno, recorded for the unique Secretthirteen and for you all.
Chill and hope you enjoy the result!

Ascion of Repitch Recordings delivers a spacious selection of pieces from various movements in the last 5 decades, ranging from kraut to ambient. I've listed for HHV.DE some of my fav new press and repress vinyl records that I enjoyed to deal with in 2016 Last recording of my liveset up on the internet!
https://soundcloud.com/ascion/ascion-liveset-sucide-circus-rituals-berlin-07072016-excerpt

43 minutes excerpt from the last liveset I played in Berlin at Su***de Circus.

Bang your head! but..
“In 2005, Terry Balsamo, Evanescence guitarist, incurred a stroke which doctors postulated may have been caused by frequent headbanging. In 2007, Irish singer and former Moloko vocalist Roisin Murphy suffered an eye injury during a performance of her song "Primitive" when she headbanged into a chair on stage. In 2009, Slayer bassist/vocalist Tom Araya began experiencing spinal problems due to his aggressive form of headbanging, and had to undergo anterior cervical discectomy and fusion. In 2011, Megadeth guitarist Dave Mustaine said that his neck and spine condition, known as stenosis, was caused by many years of headbanging. Slipknot Sampler Craig Jones once suffered from whiplash after an extended case of powerful headbanging.” (Wikipedia)
So.. Pay Attention!

Closing Affekt Club saturday night was so good!
The reaction when I played this track..explosive..unexpected! Thanks everyone.
Now back to musical works.
Priority: New remixes and New and Old Collaborations to be done.
Stay tuned! 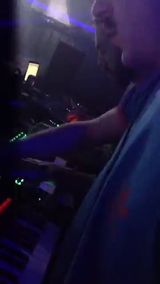