Starting in November, the Berlin-based Zait wa Za3tar Festival will be celebrating Palestinian arts and culture by holding a series of events showcasing cultural perspectives and introducing audiences to the diversity of Palestinian life and society.

After being welcomed by Zait wa Za3tar earlier this year Bakr Khleifi and Roshanak Rafani played for Zait wa Za3tar's first post-lockdown crowd. Visitors who were able to view the exhibition "Eyes of Gaza" in the halls of Ulme 35 only moments before let their impressions sink in to the sounds of "Between Maqam and Harmony". You can find our podcast of the same name on Spotify & co - this way you can also check out some of Bakr Khleifi's music.

The exhibition Eyes of Gaza was again shown in Berlin, hosted this time by the Interkulturanstalten Ulme 35, a meeting point and cultural center in Westend, Berlin during a day of Palestinian culture featuring music and art.

Finishing half a year of online and offline panel discussions Cora Josting got together with Irit Neidhart and Dr. Bashar Shammout to discuss the effect Orientalist photography by early Christian male travellers still has on contemporary Orientalist views that are often found in debates around Palestine.

Palestinian parkour artist Ihab Dawwoud and Yara Almunaizel continue May's events with a talk about the development of parkour. Shortly after there is a public workshop on the basics of parkour. Many thanks to our panelists!

As this busy summer has now ended we wanted to let you in on the events we have put together from May to - now! Yes, we have kept going so stay tuned.
We started hosting events in person in May, as soon as it was responsible to do so - Cora Josting and Nahed Awwad finally opened up the exhibition "Eyes of Gaza" in Forum Factory, together with Fidaa Zaanin, who successfully tied this Spring's events in Palestine to the exhibition.
We are grateful also for the support by Stefanie Kulisch for this exhibition and the support by ZAK (Zentrum für Angewandte Kulturwissenschaft und Studium Generale) by Anna Lindh Foundation.

Between Maqam and Harmony Concert

Live concert „ between Maqam and Harmony“ including classical pieces from Turkey and the Arab world, namely Morocco, Egypt, Syria, Palestine, played by Bakr Khleifi on Oud and Roshanak Rafani on Tombak

After more than half a year of events of the [zait wa: zaʕtar] Festival, we can finally invite you to a live event – the concert originally planned as a Christmas concert, now almost a midsummer-celebration, with Bakr Khleifi on Oud and Roshanak Rafani on Tombak in the garden of Ulme 35; chairs will be placed on the lawn according to Covid-19 distance rules.

This is also another chance to view our exhibition Eyes of Gaza عيون غزه, open until 19hrs inside the building.

Entrance is free. There will be drinks for sale, as well as some Palestinian mezze-style food, and even Palestinian pottery.

"I Wanted to Show the Beauty of Gaza, Not Only the Destruction." Review - "Eyes of Gaza"

"And yet for all the beauty and apparent normality, we are occasionally reminded that Gaza is anything but a normal place to live. The kids have all grown up during the debilitating blockade. The recent Israeli bombs were also nothing new to any of them."

An Exhibition of Photographs by Children from Gaza Is More Relevant Than Ever Because of the Recent Bomb Attacks by Phil Butland The opening of the Eyes of Gaza photo exhibition on 18th May was supposed to be broadcast live from the Forum Factory in Berlin. But, in solidarity with the Palestinian ge...

From yesterday's opening of the exhibition "Eyes of Gaza". We were grateful to count Fidaa Zaanin among our speakers, reflecting on the exhibition and archival photos from a Gazan perspective living in Berlin.

The exhibition will remain open at Forum Factory Berlin until Sunday - to visit the exhibition you will need a negative test and wear an FFP-2 mask.

Many thanks to all our partners for making this possible, especially Anna Lindh Foundation who further supported this exhibition in Germany.

As preparation, watch this video: https://youtu.be/awUJlp4qLvk

Join us for a hands and feet on workshop with Palestinian parkour/freerunning athlete Ihab Dawoud. In this hour long session you will be introduced to the art of Parkour. Make sure to wear comfortable foot wear and dress for the outdoors.

Ihab Dawoud was born in 1998, in Qalqilya-Palestine where he also grew up. From a young age, he was fascinated by defying gravity, being suspended in the air, and creating alternative spaces. He became passionate about parkour and quickly found a like minded community in Palestine where he also starting teaching parkour at the age of 16. Ihab creates his own short films and starred in documentaries such as Epicly Palestine’d and STORRO’s docu Series Parkour in the Holy Land. Ihab moved to Berlin in 2017 where he continues his journey in developing his skills and passion. Ihab is also a passionate filmmaker, music producer, and enjoys skateboarding and yoga. Check out his work on Instagram https://www.instagram.com/ihab_dawoud/

Palestinian parkour athlete Ihab Dawoud, will take us on his journey toward becoming a parkour professional. This talk will focus on overcoming hurdles both physical and mental, as well as finding an opportunity to make physical structures your playground, through Parkour in Palestine. The panel explores how neglected spaces can be used to create a sense of freedom and push against the norm. Parkour is a sport but also a claim and an expression of freedom of movement, something that is severely restricted in the Palestinian occupied territories. Parkour in Palestine reminds us of the life under occupation and the limits it sets. Ihab will share some of his own films and give a short overview of his journey toward becoming a Parkour professional, on which Yara will follow up with questions, before opening up the floor to the audience.

As the situation in Gaza is worsening by the minute, with Israel attacking from the skies and on the ground, it is curcial to remember that this is not a one time event but an ongoing reality for those in Gaza and even beyond. With our exhibition we want to highlight the lives of Gazan youth during COVID-19 under a blockade that has gone on for too many years. All photos were produced during Fall 2020 and were supported through workshops.

As of now, children already make up a quarter of the victims, with many more being affected through the trauma of losing their livelihoods, family members and friends. For our participants this is not the first attack on Gaza that they live through, and some of them reflect their childhood under the war on Gaza of 2014 in the exhibition, as well as their hopes and dreams for the future, that is now again being shattered.

Our gratitude goes out to all who enabled this project in Gaza, Amjad al Fayoumi and Salman Nawati in Gaza as well as Stefanie Kulisch, Nahed Awwad and Cora Josting in Berlin.

The people of Gaza are not numbers.

All over the world, people get to see images of Gaza. Mostly, those images are pictures shown in the news, reflecting the current state of affairs – destruction, death and despair. Although Gazans have to perpetually endure the siege and war on the Gaza Strip, they also live a ‘normal’ life - with work and daily routines -
and celebrate life in many ways, defying the situation imposed on them. It is this side of life in Gaza which is portrayed in this exhibition, insisting on a common humanity while rising above the 'othering' conveyed by the imagery of mainstream media.

In the days of Covid 19, we have become used to digital meetings. For people from Gaza, these kinds of virtual meetings are practically the only way to connect with people outside Gaza, as the blockade makes it impossible for an overwhelming majority of people to leave the area.

The exhibition project Eyes of Gaza عيون غزة opens the door to digital encounters between young people from Gaza and Gütersloh. In addition to the photography project on site in Gaza, it facilitated a student exchange between the project‘s participants in Gaza and students from a school in Gütersloh, Germany, to establish a direct communication among peers.

Eyes of Gaza عيون غزة is opening up a fresh perspective on life in the Gaza Strip. A different reflection, a distinct angle that usually remains hidden to the outside world. Eyes of Gaza عيون غزة was curated with the intention to give a voice specially to the young generation. Those nine young Gazans producing the substance of this exhibition are extending an invitation to the exhibition’s visitors, showing us their life as they choose to portray it - themselves, people they love, their favourite places and hangouts where they spend time with friends or family.

... is the initiator of the Zait wa: Zaʕtar Festival and a festival curator. Current chairwoman of the Ibn Rushd Fund, a cofounder in 1998. Majoring in North American Studies, she since translated her knowledge to a SWANA portfolio of topics. She worked in developing the Ibn Rushd Prize, initiated the Ibn Rushd Lectures (2011) and the Diwan al-Falsafa (2015). Cora co-curated The Missing Journey of Ibn Battuta (2016) and Al Qafila, the Balkan Route of Refugees (2018), and created and executed Dou Lil Moustaqbal, a project with Refugee Women, (2018). For the [zait wa: zaʕtar] Festival, her main activity is the exhibition project Eyes of Gaza عيون غزة and a panel on 'Orientalizing the Holy Land'. Aside from her work for the [zait wa: zaʕtar] Festival and its mother organization, the Ibn Rushd Fund, she is also a literary translator and an organizer of concert tours.

Between Maqam and Harmony Concert 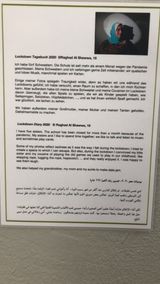 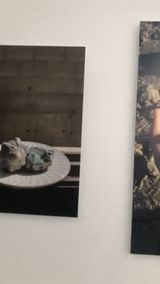 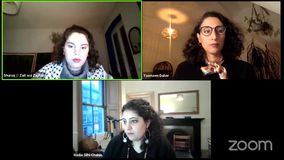 Feminism at the Intersections of Occupation, Patriarchy and Coloniality 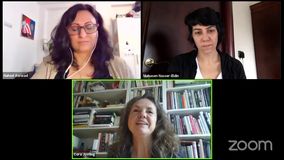 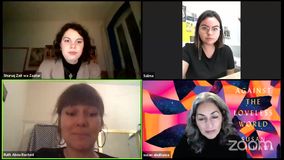 Against the Loveless World - Book Discussion with Susan Abulhawa