All are welcome here! This is a space to share information and artistic projects of a community bui

Artists for Justice and Peace updated their address.

Artists for Justice and Peace updated their address.

🇺🇦🌺A little girl wears a crown of flowers in the colors of the Ukrainian flag. French street artist C215 created this stunning mural in Paris to remind people of the war’s toll on civilians, especially children.

Below the portrait is a quote by Ukrainian President Volodymyr Zelenskyy: "I really don't want my photos in your offices, because I am neither a god nor an icon, but rather a servant of the nation. Instead, hang the photos of your children and look at them every time you want to make a decision.”

Earlier in the year we had a parish fire drill. It was quite a jolly affair, with a nice little briefing beforehand, lots of laughter, and when it was over we were all allowed to have morning tea. Yesterday, at the Park Hotel in Melbourne, there was an actual fire . The people in the hotel didn’t

“For us it was about delivering a message.”

When you yearn for freedom, sometimes a spoon is all you need.

🎾 Australian tennis legend Evonne Goolagong Cawley has been honoured with a mural that doubles as a hitting wall in Noosa, as part of Tennis Australia’s National Hitting Wall project.

Wiradjuri woman Goolagong Cawley is a 7x Grand Slam singles titles winner, and her achievements are part of a mural project at the club, featuring the work of Indigenous artist Maggie-Jean Douglas. ❤️💛🖤

There are also plans for other mural hitting walls across Australia to celebrate current world number one's and Grand Slam champions Ash Barty and Dylan Alcott.

Planting forests may cool the planet more than thought

Planting forests may cool the planet more than thought

Planting trees and replenishing forests are among the simplest and most appealing natural climate solutions, but the impact of trees on atmospheric temperature is more complex than meets the eye.

A revolutionary new program for Australian children has just been launched online by arts and social justice company Big hART, and it’s turning the old education pyramid upside down.

Walk in solidarity and help save lives. 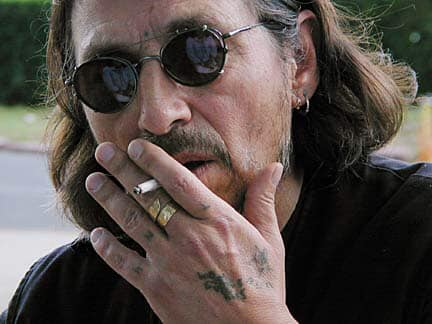 "You can’t believe and think simultaneously. It’s just not going to happen. It’s a contradiction—an impossibility. Because to think means you think. To believe means that you’re not thinking, you are just believing. And your ability to think is limited by the prejudices and the definitions of your beliefs."
-John Trudell

Dumbartung’s latest documentary ‘People of the Chain and Shackles.’

This is the story of Wadjemup known as Rottnest Island, a concentration camp of war off the coast of Western Australia.Aboriginal men were transported to Rot...

Opinion | Standing with Nepal’s survivors of trafficking in persons

Opinion | Standing with Nepal’s survivors of trafficking in persons

Ultimately, to eliminate trafficking in Nepal, we must address the underlying issues.

What is the price of speaking out against China’s oppression of the Uyghur people? Sayragul Sauytbay, an ethnic Kazakh and Chinese national, talks to Alessio Perrone about being forced to teach propaganda in a concentration camp and fleeing to Kazakhstan.

Will you support this vital campaign which is key to stopping coal mining expansion in Queensland, Australia?

Today we have written to the Minister for the Environment to call for an immediate stop work order on construction of the Carmichael mine.

We have asked her to intervene and support our human rights by ensuring that our lands and waters, and our sacred Doongmabulla Springs, are protected from Adani.

You can help strengthen our demands: https://bit.ly/3wS5Tmf

Managua March To Show Support For The FSLN

Managua March To Show Support For The FSLN

Military-grade spyware licensed by an Israeli firm to governments for tracking terrorists and criminals was used in attempted and successful hacks of 37 smartphones belonging to journalists, human rights activists, business executives and two women close to murdered Saudi journalist Jamal Khashoggi, according to an investigation by The Washington Post and 16 media partners. https://wapo.st/3zb5DjZ

Meet Dr. Nadine Caron, the first Indigenous woman to graduate from the University of British Columbia's medical school at the top of her cla...

'Look at her now': Goolagong always knew Barty was Australia's next champion

'Look at her now': Goolagong always knew Barty was Australia's next champion

NAIDOC week is a celebration of Aboriginal and Indigenous culture, values and peoples. This year's theme, Heal Country!, reminds us as a nation to look to the traditional custodians of this land for guidance and healing. It's about listening, asking questions, and learning from those whose cultures know the true meaning of sustainability. It's also about protecting what's left.

This image is based on the scene I saw in 2019 at the #djabwurrung embassy as people fought to save sacred trees, including two birthing trees, from being torn down to make room for a highway expansion. Then there was the destruction of the 46,000 year old #juukangorge to expand a lead and zinc mine last year. The extractive mindset has a lot to answer for, and this #naidocweek offers us a time to pause, rethink, and move forward in a better way.

Stunning artwork and wonderful process to make it. Love Love Love this! 💗

Working closely with the local land management rangers, artists like Bernadette Watt are utilising discarded ocean debris such as abandoned nets and ‘rubbish’ to create wearable art and considered fashion pieces such as baskets, dilly bags and silk-dyed garments.

“We go out and collect old steel, dig out plant roots for the yellow dye and collect other leaves to make the black colour. We then come back to the Arts Centre, crunch up the leaves and wrap the fabric tightly around bits of steel. Then we boil up two billies, one with the yellow dye and another for black. When they have been in the dye long enough we wash them out and hang them to dry outside the community.” – Bernadette Watt.

See work by Bernadette Watt and others in ‘Piinpi: Contemporary Indigenous Fashion’: bit.ly/3pJthjk

A painting can capture a soul and a story in a way our unreliable memories cannot. When a lost artwork by her father made a surprise appearance in her life, Nirrimi Firebrace found a way back home to her culture, childhood - and a lost brother.

Sadly there is too much hate in the world. Why not save yours for the ultrawealthy! | First Dog on the Moon

Sadly there is too much hate in the world. Why not save yours for the ultrawealthy! | First Dog on the Moon

Thanks for nothing billionaires!

The theme for NAIDOC this year is ‘Heal Country’ – the first thing that comes to mind when thinking of the NAIDOC theme is the continued fight to save Djab Wurrung Country.

Donald Trump shuts down his blog after less than a month

Donald Trump shuts down his blog after less than a month

Right now we're stuck with jumbles of letters and numbers, or country names that stigmatize people from that region. Experts announced a new plan to fix that.

‘Songlines’ is an Aboriginal-led exhibition that takes visitors on a journey along the epic Seven Sisters Dreaming tracks, through art, Indigenous voices and innovative multimedia and other immersive displays.

The project was initiated by Indigenous elders who set out to preserve the stories for future generations and to promote understanding of songlines among all Australians.

In 2021 the exhibition will commence an unprecedented international tour, travelling to The Box in Plymouth and later traveling to Germany and France in 2022 and 2023 respectively.

We're looking back at 'Songlines' as apart of our 20th year celebrations.

The announcement in the budget speech was made without Environment Ministry’s knowledge, say officials who fear it could lead to unchecked exploitation of resources to the point the country may not have enough for itself.

Provocative Indigenous artist and activist Richard Bell says he is tired of getting angry. “I am looking to get even now.”

Be the first to know and let us send you an email when Artists for Justice and Peace posts news and promotions. Your email address will not be used for any other purpose, and you can unsubscribe at any time.

Send a message to Artists for Justice and Peace:

Artists for Justice and Peace

Are you wondering what Demilitarization means?

Well, I'll tell you the short version story of what it means to me. Ever since I was a child, if I ever had an opportunity to make a wish, it was always for world peace. Shooting stars, the large half of the wishbone, throwing coins into fountains, eye lashes on my cheek. It was always and remains a wish for world peace.

I came across Aikido and discovered O'Sensei (the founder of Aikido) some 8 years ago or so now. O'Sensei developed Aikido (a Japanese martial art) as a bridge to a peaceful world. He held a vision for world peace. I trained hard in Aikido for a number of years, until I almost had my back broken by a fellow student during training. I had to give up the training and it killed me.

Then one day around this same time, I discovered the artwork of Kaz Tanahashi. A friend sent me a link, as Kaz is a political artist and so am I. One of Kaz's artworks made me cry. I emailed him and asked him if he would be my teacher. He said yes. Kaz was the adopted son of O'sensei. I have kind of adopted Kaz as a father figure.

Together we are trying to honor O'Sensei's vision. And so here is Kaz's work: https://www.brushmind.net/ A World Without Armies website coming soon...

Other Art in Perth