West Space is a non-profit artist-led organisation located on the unceded lands of the Wurundjeri people of the Kulin Nation.

Now open in the West Space Window: 'looking out over the board // you can see reflections of algae' by Red Slyme Incubator

Red Slyme Incubator (RSI) looks to develop their ongoing incubation of collaborative non-human interactions and invocations. For ‘looking out over the board // you can see reflections of algae’, RSI look to the honoured, abstract antagonism of chess. Inspired by chess engines – in particular the open-source engine 'Stockfish' – and the interaction between human and non-human in competitive play, RSI find processes of becoming through the shrine-like interactions of jewellery, chess pieces, and a red and green chessboard. This moment of inception is fuelled by the image of Red tide (the discolouring of coastal waters with algae bloom), a rupture within the apparent harmony of nature.

Red Slyme Incubator (RSI) is a collaborative practice between Hannah Hallam-Eames, Samuel Jackson, and Red Algae. RSI utilises strategies of making and installation practice that develops the character of RSI as a single but non-discrete entity.

'looking out over the board // you can see reflections of algae' is supported by The City of Yarra through their Annual Arts Grants.

Image description:
red, circular, molecular forms huddle together as if viewed through a microscope

West Space is looking for a dynamic and collaborative Director! More information at the link in our linktree.

West Space is looking for a dynamic and collaborative Director with a strong artistic vision to lead our team and provide strategic management for our organisation. Reporting to the West Space Board, the Director ensures consistent achievement of our mission, administration and financial objectives. They have responsibility for financial sustainability through income generation, development and partnerships.

The Director will have a track record of delivering innovative programs that advance contemporary artists’ practices. They will have demonstrable experience in successful fundraising and arts management and a strong professional network. They will be passionately committed to expanding West Space’s public reach and reputation through a program that enriches, informs and challenges audiences.

We welcome applications from individuals as sole Director or from two-person teams who propose a job-share arrangement.

We encourage applications from Aboriginal and Torres Strait Islander people, people with disability, those identifying as LGBTQIA+ and people from culturally diverse communities.

Underlying everything we do — the commissions, exhibitions, and public programs — is the support of our community.

Become a West Space Supporter and make a structural impact on the future of contemporary art. Tax deductible donations start at just $2.

Read more and donate through the link in our bio and stories.

Artwork by @scorpiopork
Georgia Morgan is an artist based in lutruwita (TAS) inventing her own vernacular architecture, making use of found materials, found stories, and found rituals. Overlaying, photocopying, stacking and mortaring a multilayered present that is thicker than what is real. Morgan draws freely on the local knowledges of the places that she inhabits as well as places she has never been — places that are dreamed, relayed to her in conversation, rumoured, intuited and invented — she reconstructs them anew creating fantastic dioramas that are as reverent to shrines as they are to car parks. Every work is a site specific best poem, a spontaneous readorning of the mundane; transgressive and transformative.

We have a new issue on West Space OFFSITE: 'Favourable Conditions', edited by Sebastian Henry-Jones 🌾

This issue reflects on our understanding of 'creativity' under late Capitalism. In the context of continuing cuts to funding for the arts, contributions to 'Favourable Conditions' suggest that it is within our power to create our own spaces within which to live fulfilled as our cultural, social and political selves.

Experience the full issue through the link in our linktree :^)

'Favourable Conditions' has been generously supported by @copyrightagency_

Image descriptions in the comments

🐑Join us tomorrow afternoon, Saturday May 14 for the opening of Abdul-Rahman Abdullah and Anna Louise Richardson’s ‘Watching’, 3-5pm! Childcare will be available - please contact [email protected] to register.

🐑Don’t forget to register for ‘Woollen loops, chains and links’, a crochet workshop with Golden Wattle Hookers on Sunday 15 May. Link in our linktree.

🐑Following the workshop on Sunday, Abdul-Rahman and Anna will be doing a talk for kids at 2:30 - all welcome.

Image description: Abdul-Rahman, Anna, their three children, and Jill and Holly from Golden Wattle Hookers pose for a group photo in front of one of the works in their exhibition, a wallpaper image of a forest.

Families and individuals are invited to attend Woollen loops, chains and links, a crochet workshop with Jill Paynter-O'Meehan and Holly O'Meehan of Golden Wattle Hookers. Perfect for beginners, you will learn a collection of basic stitches to create your very own crocheted pouch to take home.

This workshop costs $15 to attend, which covers the cost of materials.

This program is supported by The City of Yarra.

Image description:
Two smiling women sit on a couch in a brightly lit room. They are knitting, and are surrounded by baskets of twine and needles.

To celebrate the final weekend of the show, we’ll be hosting a discussion on Saturday 30th April between Tarik, Lara Chamas and Samira Farah. Please join us from 3pm to watch the film and listen to Tarik, Lara and Samira discuss themes explored within the film including faith, beauty, violence, memory, and the Islamic migrant experience.

Register your attendance via the link in our bio.

Image: Tarik Ahlip, Paradise, 2022. Photo by @janellelow_
Image description: a darkened gallery with rows of chairs positioned in front of a projected image of large boulders.

To celebrate the final weekend of ‘Paradise’, West Space is thrilled to present an in-conversation between Tarik Ahlip and artist Lara Chamas, facilitated by Samira Farah.
Taking inspiration from the bodies of work of these two artists, their overlapping interests and experiences, this conversation will unpack themes explored within ‘Paradise’ around faith, beauty, violence, memory and the Islamic migrant experience as it occurs here in Australia.

Lara Chamas is a Lebanese, Australian artist, based in Naarm. fleeing from civil war, her parents migrated to Australia, where she was born. Her practice investigates topics of postcolonial and migrant narratives within the context of her cultural identity. Through the use of narrative and experience documentation, storytelling, transgenerational trauma and memory and tacit knowledge; her research intends to explore links and meeting points between narrative theory, cultural practice, current political and societal tensions, and the body as a political vessel.

Samira Farah is an independent art producer and radio presenter from Sydney. She got her start in radio back in 2014 with activist community radio station 3CR and has never shaken the radio bug.

Image description:
[1] a golden yellow circle, radiating lines from its centre. It looks like a piece of architecture
[2] A grey platform with grapes, figs, prunes, olives and other objects on it. They look like they could be made of wax

Image description: a soft sculpture of a rabbit, held together with bright orange hand stitching. The fabric has painted shapes in purple, beige and brown colours. The rabbit has a love heart shaped button for an eye.

Isabella Hone-Saunders and Sebastian Henry-Jones have each written an essay to accompany their curated program ‘to listen, not to preserve’, happening tomorrow, Saturday 26th. Head to West Space Offsite through the link in our linktree to read these texts and a full schedule of tomorrow’s events.

Be the first to know and let us send you an email when West Space posts news and promotions. Your email address will not be used for any other purpose, and you can unsubscribe at any time.

Send a message to West Space: 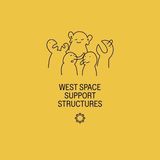 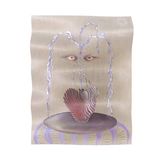 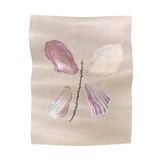 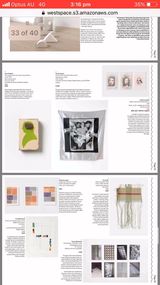 We’ve updated the fundraiser catalogue and there are still some incredible works available to purchase! Check it out:https://westspace.s3.amazonaws.com/uploads/2019/03/2019-Fundraiser-Catalogue-updatelow-res.pdf

😉 thanks Lisa Radford & Northern Theatre Company! And congratulations on a great show! #whatareyoudoinglater 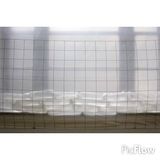 Other Art Galleries in Melbourne